Every time the Roon core gets restarted I need to log into TIDAL again.

Also, I get a message saying “Qobuz login failed” as well, Retry often fixes it (I subscribe to both).

This has been going on for some time now. What’s going on?

Can you confirm that you’re up to date on all remotes and the Core machine?

To clarify — Is this only happening after a reboot, or does closing and re-opening Roon trigger this to occur?

All remotes and core are up to date.

It happens on every restart of Roon Core, not just on reboot. Here’s a screenshot right after restarting Roon (no reboot): 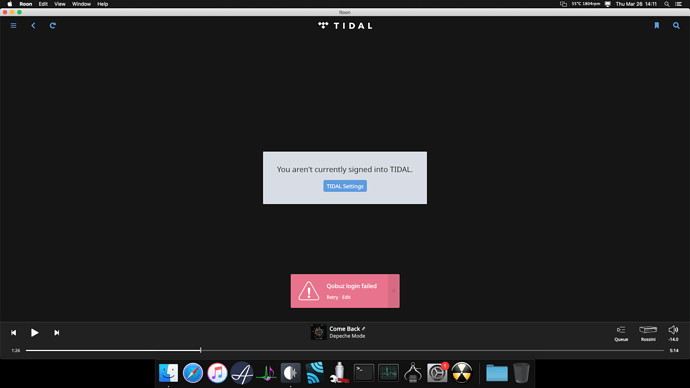 BTW… This is a screen sharing session to the mac mini running the core. It’s been happening for some time now.

I restarted Roon Core at around 6:30pm NY time and got the same errors so you should be able to look at your logs and see what’s going on.

The TIDAL error seems to have gone away now. However, the Qobuz login error (see pic above) is still there. Hitting “Retry” a few times clears it, so looks like a timeout of some sort.

Spoke to soon. Not only TIDAL fails to log in, it doesn’t even tell me.

Error I get while going through the web-based authentication: 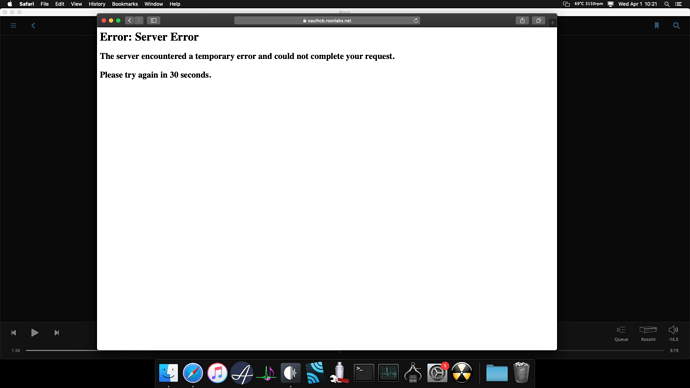 The TIDAL login authentication error has cleared now. I think it was on Roon’s side (server process or some such thing).

Still having this problem.

Same here… never had a problem with Tidal. What are you guys doing at Roon?

Qobuz issue: times out and shows the message I posted above. After a short while it does log in and if I hit Retry the message goes away and all is fine.

TIDAL issue: Every Roon Core restart requires that I re-autheticate via the web interface. It does not remember the authentication. Moreover, I need to log OUT of TIDAL in Safari, then log back in, for the authentication to happen.

TIDAL and qobuz both fail. Music from SSD plays flawlessly. LUMIN app also works perfectly fine with both, TIDAL and qobuz. The fault is clearly with ROON.

I reboot my Core every day in summer due to thunderstorms and potential lightening strikes.

As It restarts I have also been noticing that Tidal does not auto connect as it used to.

There are currently issues with one of the big internet undersea cables to Africa which I suspect may be involved. The other option is that some streaming services are “saving” bandwidth by dropping HD Resolution on videos eg Netflix. Is Tidal doing something.

There is a lot going on in the world at the moment !!

Tried this. Did not find tidal_account in that location but found tidal_storage… Also deleted cache as you detailed.

as a next step let’s try to refresh RAATServer to see if this helps:

Will not bother any further. This is for the Roon team to resolve.