Trialing roon. I really want to like this platform, and I have lots of other suggestions/feedback, but lets start with my first blocker from using this platform and that is sound quality. I am hoping someone here can help.

My system:
Linkwitz Orion 4 + some modifications yet to be released
Music server: i5-4670k with 16GB running windows 10
DAC: Exasound e20 DAC
All other gear is irrelevant, sufficed to say this system is as good as it gets

The issue
Simply put, with roon in the signal chain, the audio quality is diminished.
If I connect the roon remote via direct-to-dac using the exasound asio64 2ch driver, it doesn’t sound as good as playing back the same .flac on the same box using JRiver (no output modifications). Both are “bit perfect” no alteration.

Variation
If I play roon through HQPlayer upscaled to DSD256, it does not sound as good as playing direct in HQPlayer with the same .flac using the same settings.

The effect is the same between HQPlayer and direct PCM. There is a harshness/bloom in the upper mids to treble using roon that is not present if I play back direct on the host system via JRiver or HQPlayer. as if there are timing issues, or there is some other processing of the signal to accentuate these frequencies.

Please let me know if I can provide additional information.

Nice to see another orion user here…I’m using v3.3.1 and also have LX 521 and LX mini under construction…bit I digress.

I also run a similar core setup but i5-6500 and use jriver v22 too. My DAC is ps audio ds Jr. that is Roon certified and ready. I use the bridge II interface (LAN)

Honestly I can’t say I hear much difference between the 2 platforms, even using other usb dacs likes Oppo ha-1 and Emotiva DC-1 there was not so much difference that I found one with night and day differences and all performed pretty well in their own capacity even with the ps audio DAC on USB. No highend USB cables either just run of the mill USB. This was validated by 2 other listeners at least in my LX 521 setup.

What format of tracks are you using?

Good to hear from you as well. I’ve been working with Don Barringer tuning these things for the last 2 or 3 years. You can’t imagine the work involved… It is amazing I’m still half sane.

I purchased a set of “audiophile usb cables” once as an experiment, but my my DAC I find no audible difference with either USB cable.

Is your music local or on a NAS? Mine as all on a synology nas which is all on the same gig-e network. I’ll try moving some files to my local music server HD to see if that has any effect.

For optimal SQ you typically would not connect the server running Roon directly to the DAC as Roon does a lot of things the typical music player doesn’t, thus placing the server under greater load and making for an electrically noisier environment.

Mine is like yours all on gigabit Ethernet and synology ds1813+

My Orions are wood artistry built but locally upgraded here by the only other Orion builder StevenH here in Singapore. I bought them 2nd hand just after the lx 521 was announced and both Steven and I built the lx’s as probably the 4/5th pairs in the world.

I tried the curious usb cable but didn’t find any real difference to run of the mill cables.

SL’s setups are hard to beat

Do PM me so we can keep this on topic

so they are multi purpose. they are 2010 vintage with SSD’s installed and 8GB Ram - nothing too fancy but run great.

My original configuration was using a gigabyte brix i3 broadwell as the low RF emitting NUC running HQPlayer NAA. HQPlayer and roon ran on the i5-4760.

This configuration did not prove very effective. I was expericing all kinds of weird issue. Not able to stream properly to DSD256, skipping tracks getting confused whether the track was playing or not. For example press skip, HQPlayer would think its paused and roon thinks it is playing. If I then press pause in roon I would hear the audio until its buffer ran out. Pressing play yet again, would return back to playing normally.

This happened all the time.

to roon: What are the minimum specs for running an NAA only streaming-to-dac NUC? I would have thought this would be more then sufficient, as I do get over 700Mbps in a speedtest outside my network, so surely has the bandwidth.

I’ll try it once more and increase the buffers to the maximum to see if that helps. I’d entertain other suggestions…

The other thing that is driving me crazy is every time I click to play something it opens a dialog asking me what I want to do… e.g. play, enqueue, etc. How do I turn this behaviour off or at least choose a default behavior?

Update: using the fanless NUC bridge with server core on the i5-4670k does make JRiver and roon sound the same now. I’m pretty sure I would now fail an ABX listening test between the two (I’ll get my wife to try this later as a curiosity).

Next moving on to DSD upscaling with HQPlayer which is where I had problems before… But at least I have a starting place now, so this is a good thing.

I tried it with NAA+HQPlayer controlled from my macbook pro but involving HQPlayer is just too buggy and will prevent me from signing up.

I sent jussi several logs, so hopefully between roon and HQPlayer something can be found to fix these issues.

My last suggestion is to make the roon ios app more lke JRemote (or just steal him from JRiver lol), it has such wonderful polish, but you guys are making impressive in-roads. The UX is better on ios Jremote (more capable, smoother etc)

example of HQPlayer NAA giving up:

Adding in support per contact@roonlabs.com

I replaced the NUC with a more powerful i7-6600U based NUC and the SQ issues improved, however experiencing the same issues with HQPlayer. Using HQPlayer alone there are no issues. More often than not, when I click “next track” button in roon, HQPlayer thinks its paused. If I then attempt to pause the playback in roon, it un-pauses hqplayer, and plays until the buffer is empty then stops.

This is holding me back from purchasing roon.

Hi @Greg_Tiller ---- Thank you for the report and my apologies for the troubles here. We would like to try and reproduce this issue in house. May I kindly ask you for the following information.

steps to reproduce. Note NUC will refer to the i7-6600u connected to my DAC, and “SVR” will refer to my i5-4670k (currently @4ghz). Going from memory so hopefully I don’t miss any steps.

Note: I am upsampling PCM to DSD256 SDM-DSD using poly-sinc-short-mp with DSD7 256+fs. Set the drop-downs to this manually regardless of your settings for sake of keeping things the same. 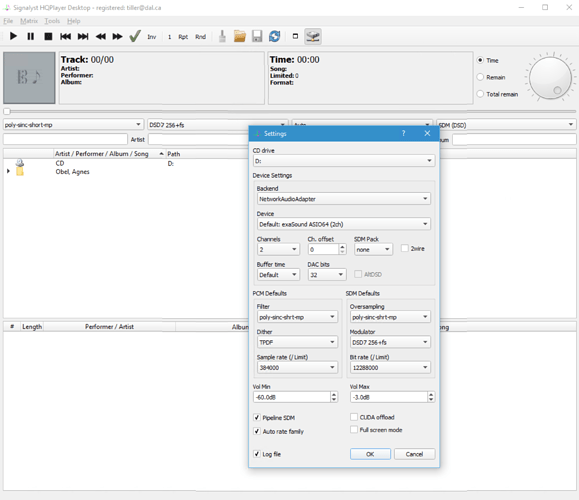 Your diligence is greatly appreciated.

I have taken out a ticket and placed it in my developer’s queue to try and reproduce this issue in house. Once my report has been updated with their feedback I will be sure to follow up with you ASAP regarding our thoughts/findings. We greatly appreciate your patience!

Thank you for provided steps. Would you mind to re-confirm whether I understood your setup correctly ?

Correct, except for “Roon Remote”. Not sure what this means, as there is no such thing as “roon remote” for osx. I downloaded “roon” for osx which acted as the front-end to control everything

@Greg_Tiller ---- Thank you for the follow up and the feedback. I have updated our notes on this issue and have passed this information back to Vova for evaluation. I will keep you updated on our findings. We appreciate your patience.

A post was split to a new topic: Roon + HQPlayer disconnecting

A post was split to a new topic: Sound quality - PC Server and Android