I really tried to get my trial working. The problem I have is that I do not have a Windows or Mac available to install the client. The RoonServer installed on my Ubuntu 17.10 64 bit desktop, but my attempts to get WINE to work with a Windows7 install of Roon was problematic. I wiped out my WINE install twice, and I suspect with some other additional work I could get it going. The WINETRICKS was used to add the .NET 4.5 requirement, and I used a Windows drive mapping to point to my ext4 partition that holds my digital music. This would be fun to figure out if I had more time, but I fear that I would be running such a non-standard arrangement that it would not be stable or be susceptible to breaking during my OS upgrades. I appreciate what Roonlabs is doing-- I think a limited browser based admin interface is key to at least get the server pointed at the music collection and the basic config complete, and the mobile android app would take it from there.

Running Roon via Wine on Linux
Start up roonserver on linux ubuntu
Docker images for Roon
Roon will not start after the latest update and now Roon can not find WGL functions
Rugby (aka Daniel or Big Dan or D1) January 26, 2018, 2:43pm #2

The android tablet app does the basic server configuration.

I have a stable roon install with wine running on Linux Mint.
First I had to add the winehq sources. Here is the description how to do it.
Then I installed winehq-stable 3.x.x (older versions of wine didn’t work for me).
Before installing you should delete your older wine version.
Rename or delete your old wine folder in the home directory.
The trick that made it working was to first install roon and after that all the .NET stuff.

This was my starting point.

Everthing is working fine so far except of some small graphical issues.

Everthing is working fine so far except of some small graphical issues.

Yes it works. Here is a screenshot plus some of my system specs: 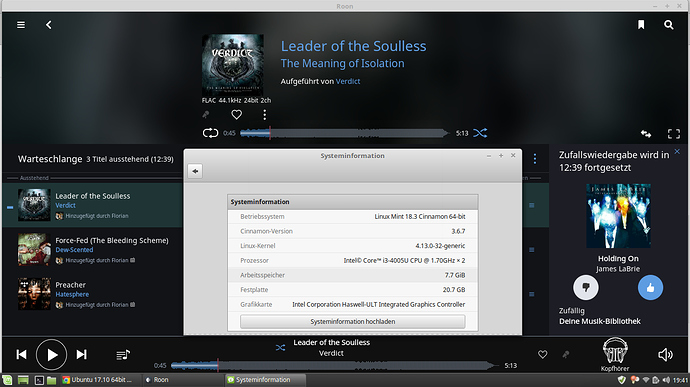 how does it perform?

Starting takes 5 to 6 seconds. After that 1 second more to load the images. Browsing is smooth, better than as with my tablet.

what spec of machine/video card and what type of tablet?

Here are my laptop specs:

Adding my laptop as I too had remote running under wine - currently not using for unrelated reasons.

Apart from some instability in maintaining connection to the core, it runs fine. This is my daily use PC and is rarely less than 70-80% memory usage so instability may be a byproduct of swapping.

My installation is very stable, except I set my laptop to sleep for more than one time. Than roon closes. But that’s not a big deal for me.
I like the addition of the “windows” version to export excel-tables and music-files. Both are working fine for me.

I prefer my laptop for editing my collection.

Wow, your instructions worked for me – so nice to have a Roon control running on my laptop! Thank you!

In order to get the Roon UI running in wine I needed to install mesa-dri-drivers.i686 and mesa-libGLU-devel.i686. Also I needed to use the winehq-stable version of wine, like @florib mentioned.

I now have a fully working Roon “Remote” using Wine and Linux Mint. This was the one thing I needed to complete my Roon installation. Previously I had to use an android tablet to get remote functionality if my laptop was running Linux or had to boot to Windows. 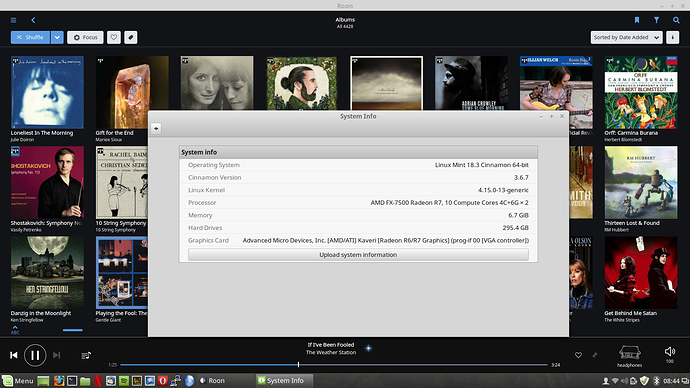 Nice to hear that it’s working for others too.

Confirmed on OpenSUSE as well.

I’m guessing it could well be because I’m using LXDE as my desktop rather than Gnome.

@evand, I’ve got the 32 bit version of roon running, although my laptop is a 64 bit one and I’m using wine 3.0.0. I’m not shure, but I think i can remember that I couldn’t install the 64 bit version of roon.
It could also be possible that a newer version of wine doesn’t work. I tried some different versions and winehq-stable version was the only one which worked.
Maybe you can try a live version of linux mint or a similar distribution to play around with other graphical interfaces.

@spockfish, what gui have you running?