Hi team, I’m attempting to import my playlists from iTunes and have followed the instructions laid out here (https://kb.roonlabs.com/iTunes), however this is not working.

I attempted to troubleshoot using this thread and have found that the newer files are not in the iTunes Library.xml file. As you can see in the attached screenshot:

This file has not been updated in 3 years so I checked the more recently altered iTunes Music Library.xml and the new files are referenced within that, so what can/should I do?

Thanks for any help, and apologies if this is already covered, I tried to find something but couldn’t.

Could you rename your iTunes Library.xml file? It’s possible that having more than one .xml file is causing Roon problems.

After you rename the file, you may need to go into Roon Settings > Storage, click the 3 dots menu next to your iTunes storage location and toggle Import iTunes Playlists to No and then back to Yes.

Hi Greg, thanks for the reply.

I tried doing as you suggested and got nothing. I realised that I had set the Roon import folder to be a few below iTunes (i.e. Music>iTunes>iTunes Media>Music) to automatically ignore anything else except that folder (i.e. My watched folder is Music>iTunes>iTunes Media>Music). This was because the setup for Roon was overwhelming and I didn’t know how to ignore subfolders. So with this information, naturally Roon is not going to watch for any prequisite xml files in that folder.

I’ve since added another folder (Music>iTunes) and set it to ignore all files in Music>iTunes>Media (i.e. ignore ‘Audiobooks’, ‘Music’, ‘Podcasts’) because a) don’t want the other files and b) already imported the music. I tried this and got double files, but I still don’t see any imported playlists. For better or worse, I think Roon is unable to look at the iTunes Media Library.xml, while I can confirm that iTunes does not use (since I trialled some renaming operations) the defunct 2014 iTunes Library.xml. I am at a loss as to what I should do?

Should I scrap the watched folder, set Roon to watch the entire Music folder, then ignore my preferred subfolders? Will this process remove all the hard ass metadata changes I’ve implemented over the time I’ve had it? Even doing this I don’t feel confident in the ability for Roon to find my playlists since I’m not sure it’s looking at the right file.

Not sure how long iTunes hasn’t been using this format, but my guess (based on the screenshot) is 2014. 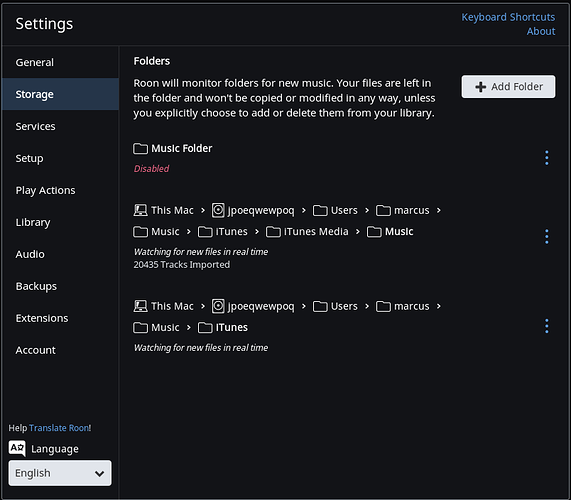 I tried editing my iTunes Watched Folder further down to the music folder, so that it was below my iTunes Music Library.xml file. Roon was still able to see the .xml file and my playlists still showed.

I wouldn’t have two Watched folders looking at the same music.

What did you rename the iTunes Library.xml file? You might want to make sure the .xml is also changed to something like .old.

I think we should tag @support to help out.

This solution is ideal because it’s not going to sync with iTunes if I add any more items to those playlists. So while it does appear as though Roon cannot/won’t look at .xml files above the watched folder (that makes perfect sense), and it does look at the iTunes preferred new .xml format (iTunes Music Library.xml rather than the 2014 iTunes Library.xml), I still don’t have a solution.

So my question to @support is: If I alter my watched folder (currently Music>iTunes>iTunes Media>Music) to go several folders above (i.e. Music>iTunes or simply Music>), will it re-import all files again or will it keep reference to the files already imported and their metadata (which I’ve already spent a considerable amount of time fixing up)?

Thanks again for your help @Greg and thanks anyone who can answer this question.

Hey @bluhska – just saw this thread here, sorry for all the confusion.

So first off, the XML needs to be in the same folder as the media, so adding them in separate watched folders isn’t going to work.

To answer this question:

If I alter my watched folder (currently Music>iTunes>iTunes Media>Music) to go several folders above (i.e. Music>iTunes or simply Music>), will it re-import all files again or will it keep reference to the files already imported and their metadata (which I’ve already spent a considerable amount of time fixing up)?

Roon tracks your files using the audio data, so generally speaking we can maintain your edits, play counts, playlists, etc, even as you move files around, or even rename them. That said, there are ways to confuse the system, so I would strongly recommend you read the instructions here before moving forward.

What I would recommend here is that you

At this point you should have all the your media and the XML in one folder that Roon is watching. Assuming Roon hasn’t been watching the same files twice, all the edits and grooming you’ve done should still be attached to the files.

Let us know how it goes, and make sure you don’t forget the backup step

Hi @mike thanks for the reply. That’s fixed it! Thanks so much!

When I added the second iTunes folder, Roon thought I was re-adding the files, and that’s why they duplicated without grooming?

This topic was automatically closed after 32 hours. New replies are no longer allowed.