I’ll let it import the library and connect to Tidal, switch of for the weekend and report back next week.

Is there anything you want me to do? I’ll try to crash Roon as before.

Edit: 1st thing I notice is Chromecast not working. Unable to enable. The rest will have to wait.

1st thing I notice is Chromecast not working. Unable to enable.

Does it show up at all?

Any change if you temporarily disable firewall on the PC?

Been away for a few days. When I switched on the PC, everything was fine. But nothing was done in the mean time. Chromecast was fine.

I did a new setup, factory settings and reinitialized the NAS, so a fresh start. The NAS is only a few months old and everything is brand new and QNAP compatible. Tried the setup wich Roon advises. Roon and database on a SSD and the library in a RAID on the HDD’s. Used one SSD for cache acceleration and used overprovisioning on both SSD’s. (encouraged by the fact the tests revealed no hardware failures)

Played music from my library and TIDAL via QNAP HDMI/RAAT/Pioneer SC-LX58. Everything fine.
The problems started after a restart of the NAS, ending with lost storage. As a partner of QNAP and a advertisment companion, this looks like something on your side, QNAP and/or Roon.

So, because I’ve got nothing better to do (…), reinitialized the NAS one last time to set it up as a QTier (the NAS puts the system and apps on the SSD) and without overprovisioning as in @crieke his setup. The only thing I did since is removing the corrupted files from my library and loading the library. Roon is analyzing as we speak, no TIDAL yet.

Can you please take a look at the logs from just after the crash and the most recent from a few hours ago when everything is stil okay? It looks like a problem in the way/sequence QNAP shuts down Roon when busy. The same happened earlier after a manual back-up, so a restart of the core. Do you now if somebody else is using Roon with this NAS (HS-453DX 8GB)?

I can reach out to QNAP, but it looks like everything is working fine, except Roon. What do I ask them?

Still a lot of questions. This is my final attempt. I’m willing to help, you’ve build a beautifull program. Just not for this combi, it seems. And that was just what pushed me towards this NAS…

Edit: The new update is installed and because I’ve got a license for one device, the core is now again back on the NAS.

Edit2: In the System Resources app the RoonAppliance process is showing as a System Proces, after some installs it was grouped as a bunch of Roon Processes, with it’s own Roon icon.

Edit2: In the System Resources app the RoonAppliance process is showing as a System Proces, after some installs it was grouped as a bunch of Roon Processes, with it’s own Roon icon.

This behaviour is expected. If Roon Server is stopped and started (or updated) by the web ui, it is listed as a system process (because it is started by the apache web server). It should not have any side effects as it is still running with the same privileges.

I looked for the previous error in your newest log. It is still in there:

I am currently wondering, if your music files really contains that many corrupted files or if these get corrupted as well…

Would it be possible to check if Roon Server works fine, without your local files (only setup TIDAL or Qobuz). If this works, without new corruption to the Roon Server database, it’ll give a hint where to look. You could afterwards add music little by little back to the database.

Thanks for looking. Can you tell me what you see in the first part of the log you copied? I’m a user not a develloper.

I deleted the corrupt files. They all came from the same import and didn’t show any meta-data, unlike the rest. Question: if I disable the storage location, will that be sufficient and will Roon have to analyze all songs again?

And don’t forget, I didn’t do anything yet with any Roonremote but initiate everything.

Sorry Dimitri, I was not very specific regarding the posted error message in my previous post. It is the same error as your logs showed before and indicate (again) a corrupt database.

My suggestions was, to stop Roon Server, delete the database again and start over with only streaming services (the music files can remain on the NAS, but don’t add them in the storage settings of Roon yet). If this causes no issues, I’d add some music, then add some more until issues reoccur…

I have not heard of issues in general with the HS-453DX model. If I remember correctly QNAP also used this model in Munich at the Audio High End exhibition in May last year. 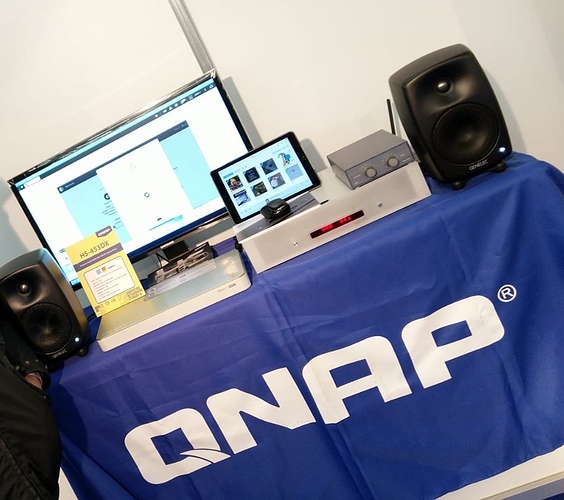 As we mentioned before, it’s looking like there is specific to this hardware that is causing the issue we’re seeing here, but the test that @crieke mentioned above is definitely a good suggestion:

Would it be possible to check if Roon Server works fine, without your local files (only setup TIDAL or Qobuz). If this works, without new corruption to the Roon Server database, it’ll give a hint where to look. You could afterwards add music little by little back to the database.

This would help to rule out any potential issues stemming from the media on the drive.

Contacted QNAP. Send my logs to them and I’m running all the tests and checks available in their environment.

Waiting for the feedback.

After the checks, I’ll run Roon without local files.

Thanks for the update, @DPV — Let us know what QNAP says!

This is what I’ve got so far. No reply from QNAP yet.

Installed everything again. Two storage pools, one SSD, one HDD. Both in RAID1. The Roon core didn’t see NAS audio output, did a re-install from the Roon app (little package icon) and thereafter no audio devices where founs at all… Only TIDAL connected.

It just doesn’t make sense. The rest is working fine.

Hi Dimitri,
This time there are no signs of database corruption in the logs.
The issue of no audio devices seem to be caused by missing ALSA libraries.
These are bundled with the Qnap system software.
I just made a small change to the qpkg to better cope with this situation. I’ll send you a link via pm.

(I haven’t used your qpkg Christopher)

The audio devices reappeared and I played Tidal yesterday, a few hours no problems. Stopped Roon. Went to bed. Left the NAS on.

This morning Started Roon, worked fine. After one song did a restart of the NAS and lost Roon again. I could connect with the core, but that’s it, nothing else. No overview, no Tidal. Wen I switch to the album page, the storage location warning appears again. The restart messes everything up.

Hope this helps a bit.

Edit: when I remove and install Roon, with the same (untouched) RoonServer folder, the problem is still there. I need to remove the (contents of the) RoonServer folder to make it work again. Maybe that’s why I’m unable to put back a back-up.

Hi Dimitri,
the error from previous logs is back in the log files.

I took a look at the QNAP logs, you’ve provided yesterday. Found several data errors there. I am not an expert in this area, but I’d advise to wait for the Qnap team to take a look.
(I also looked at my own Qnap logs for comparison and could not find any of these here…)

Thanks for the continued updates here. Since this error occurred even without any of your media added that rules out potential media corruption issues, so this is likely related to the hardware. Definitely let us know what QNAP says about this.

Tomorrow the QNAP guy will remotly go into the NAS again, this time with me present at the other end. Till now no findings and he’s pointing (carefully) in your direction.

Can you please take a look at the last log_files. This time Roon looked very stable, but crashed after a WOL of the NAS. Since there was no stable moment for Roon.

Hi Dimitri,
please ask the QNAP support if these error messages in your QNAP log can be ignored. I have to admit, I am no expert in this area. But these got my attention, when I studied your QNAP logs:

About the errors I’ll translate his answer. "This are HDD sata errors and messages uit de kernel logs. They are coming from the HDD’s themself. Checked the backplane errors and they seem fine. "

He did an install himself and luckily after an hour or so Roon crashed. (again after a restart of the NAS, done from the PC) These are the latest Roon logs.

Don’t know what to do next. QNAP is not convinced yet.

can I ask you one more question? Now everything is running fine, after a clean install for about a half hour or so… but there is no audio coming from the HDMI output from the NAS.

Can you explane why Roon is showing 5 HDMI ports for my NAS, when there are only two? (this has allways been) And no of the HDMI outlets are giving audio at all. (this is new)

Another day, another problem.

this is the end of the line for me. I’m getting of the Roon train, unfortunately. QNAP was very helpfull, you need to give them some time, but in the end I’m convinced it is a problem for you to solve. This is what happend (without repeating everything we allready went over).

Because the entire NAS environment works fine, Plex and Kodi included, I keep coming back to you guys… I’m over my head in the details and learned a lot in the meantime, but without any good results. Even though the NAS is build in the for Roon optimised way.

If there is anything I can do for you, just let me know. As soon as you found a solution, definitely let me know.