I have a mirrored USB drive connected to a PC running Windows 10 Pro. I created a share to the RoonBackups folder on the drive. I also clicked off the requires password setting under network sharing in control panel and rebooted the Windows machine.

I can connect from my Windows 7 workstation using the path. I can’t get the ROCK to connect to the share and needs some suggestions. I did get it to work with DropBox but I don’t want to upgrade and add another monthly fee. I’ve attached the screen. 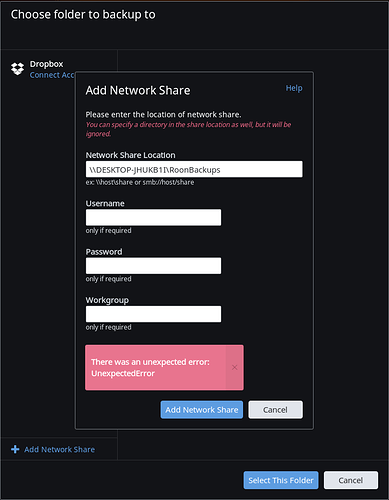 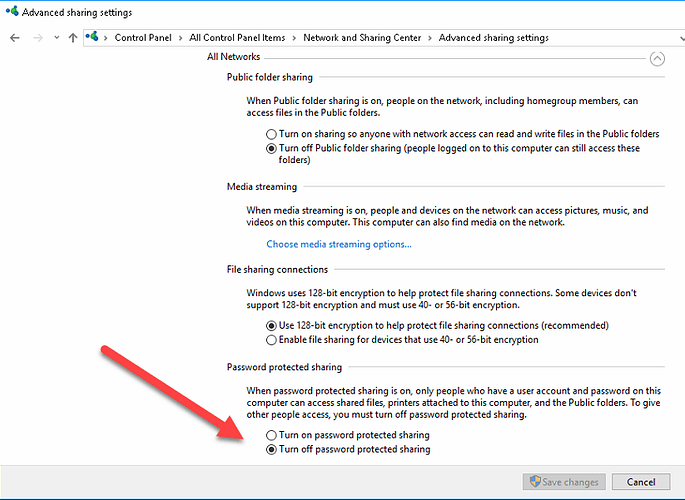 I think this is the same error as I reported here:

@support - Scheduled Backups are just not working on my ROCK installation. It seems as though Roon Server is losing network access to the locations specified for backups. I have two storage locations defined for backups: [image] The Degas machine is running Windows 10 Pro, and I have a local account set up on it for access by the Roon Server running on the ROCK NUC. When ROCK has been freshly rebooted, I am able to browse to these storage locations without issue: [image] However, at some p…

Yes, but it looks like your able to at least establish a connection. I clicked on the “Turn on sharing so anyone with network access can read and write files in the Public folders” which I noticed was off and still no connectivity.

I’ll keep an eye on your post and see if anyone can suggest a fix.

I just tried the exact same settings as you have in your screenshot, and ROCK was able to mount a folder on my Windows 10 machine without issue.

Since the Windows 7 machine is working ok, I would focus on the connection between the NUC and the Windows box – something seems off there. 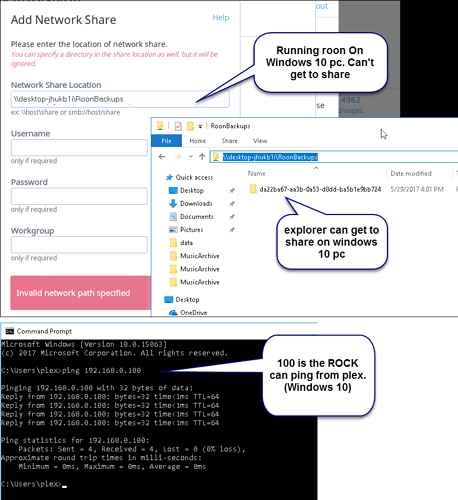 Hi @Gary_Thomas ----- Thank you for the follow up and the feedback, both are very appreciated!

Moving forward, we believe that this behavior is occurring due to the samba protocol which handles connections between Windows and Linux. We had another user correct this behavior by adjusting the IRPStackSize parameter settings.

The IPRStackSize link doesn’t appear to be working. Can you edit your post or reply with a corrected link. Thanks for your help.

Hi @Gary_Thomas ---- Sorry about that

Should be good to go, now.

Worked like a charm! Thanks a bunch! Doing a long needed backup as I write this. Also, the directions assume you know what your doing. For those that stumble on this thread, do the following: