Description Of Issue
Input: DSD64 with EQ on
When I choose DSD output mode, it seems upsampling only occurs after EQ. But ideally EQ should be performed on already upsampled signal?
This seems so when I choose PCM output - bit depth is only downsized from 64 bit float to 24 bit after EQ. On the other hand, signal path shows the high rate 2.8M signal was downsampled to 384K before entering EQ, which might cause some loss?
Under such circumstance, I don’t know which setting is better . I reckon DSD output is better for original DSD music?
The crux of my question is if there is any hidden upsampling and downsampling process happening within the EQ work which is not shown in the signal path . 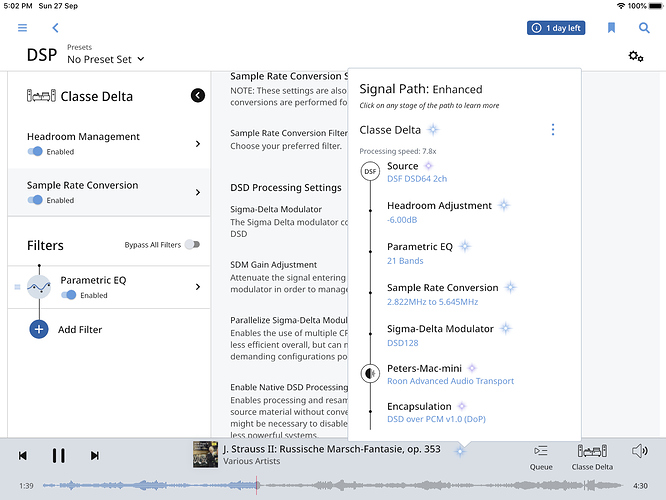 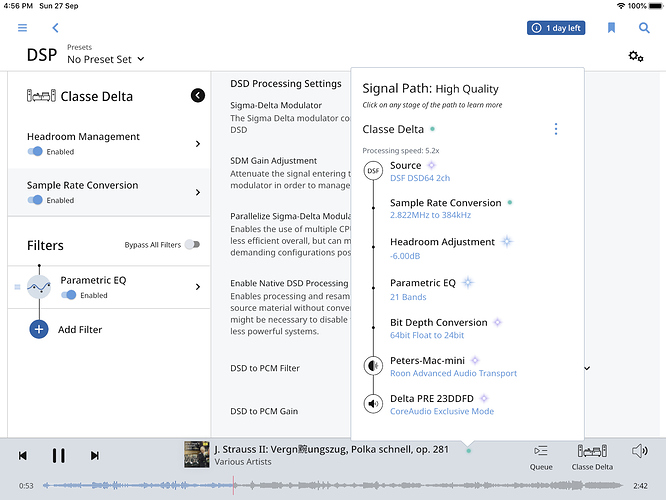 You may just inform me which one is better , the first photo or the second.

If the signal path has anything to do with DSP, it’s going to be “enhanced”, and I think it’s up to the individual to decide if that’s better or not.

Have you enabled native DSD Processing?

Thanks for the advice, but I can’t find “native DSD” setting .

Thanks . But I’d like to know which setting is better, because EQ introduces quality loss so a floating EQ on higher bit rate means a lot .

The final blob in the first example is blue: enhanced, in the second green: high quality. I’d say blue is better (it twinkles

), but I’m open to correction.

I see your point - the overall quality in the first setting is blue so it should be better than the second one which is green. Appreciate your sharp eyes !
Let’s see what the support has to say. 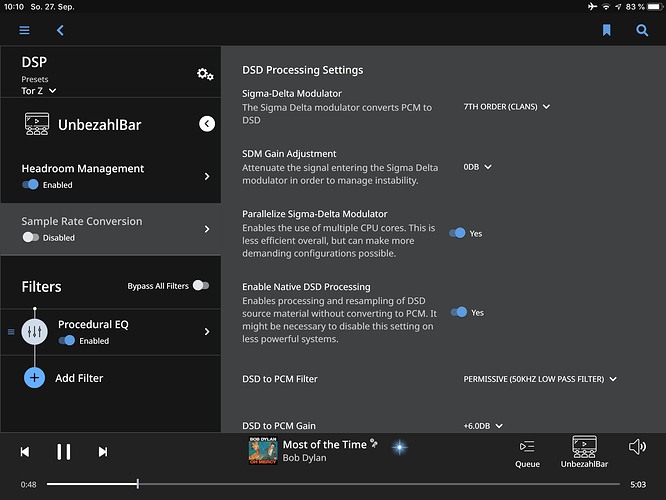 I see. I’ve already enabled this. But I don’t understand why don’t they upsample the DSD before the EQ, instead of after the EQ.
EQing at a higher bit rate improves quality .

Macs do not do native DSD processing. The best they do is DoP.

In the first shot, you are using DoP and keeping the source in DSD throughout. In the second shot, you have chosen not to use DoP, which forces Roon to convert to PCM.

I say, use whichever sounds better to you. I would keep it setup as ScreenShot 1.

No there is nothing hidden, the point of the signal path is to show you every step so you can see what Roon is doing.

We do indeed process DSD without performing a DSD->PCM conversion first. The signal path is reflecting that accurately. I’m going to explain how it works–keep in mind that there are some subtle technical details here, and some background knowledge is required to understand them fully. Processing DSD isn’t nearly as straightforward as processing PCM. With the exception of a few simple operations, you can’t process it directly in the 1-bit representation. There are more steps involved, but it’s p…

Rugby, Thanks for the comment. But my focus is EQ - I hope to have a setting that EQ is done at a higher bit depth/rate.

Hi Ipeverywhere, thanks for the in-depth knowledge . I like your summary - probably EQ could be done only on PCM. If that is the case, it’s not a good idea to convert the signal back to DSD anymore. In that sense, my second setting (output PCM) might be better though the overall quality is green, not blue .

Green is lossy while blue is lossless, the other way around.
At the end choosing what sounds better for you might be an option as well.

Sometimes , difference is not always audioable. How many people are able to tell from green to blue quality. EQ itself is a lossy process, so is DSD to PCM or PCM to DSD converting.
If iEQ is done on PCM and I choose DSD output, there will be too many conversions like this : DSD > PCM > EQ > PCM > DSD > DSD upsampling > USB.
On the other hand , if I choose PCM output, the path might be : DSD > downsampling to PCM > EQ > PCM > PCM downsampling > USB .
As such , knowing how EQ works is critical here .

I get your point from technical prospective. But would you listen to the better technical version on paper, or maybe just prefer what your ears like better? I know it’s not the answer to your specific question, just wanted to express that sometimes we (me included) are stuck in technical questions while the answer should come from somewhere else…

Then in this case IMHO it doesn’t really matter to get this answered, other than satisfying the analytical part of your brain (what on the the other hand could have influence to what you think you hear, human brainwork can be very complex…).

Did you read the post that IP linked? It explains how Roon processes DSD with EQ. The very first line says “We do indeed process DSD without performing a DSD to PCM conversion first”

I’m not sure where you are getting that Roon is converting DSD to PCM for the EQ. And as such, my original comment stands, keeping DSD as DSD is better, as is shown in your first screen shot.