I can recommend using the Uptone EtherRegen with the SonoreUPnP Bridge in this configuration as part of a Roon environment.

There are quite some changes during Burn-in of the EtherRegen switch, but now I am 4-weeks with the EtherRegen (& 2-weeks since the firmware upgrade) and I have so much more detail on every track played. The detail was there before, as the same recordings/files, but now it is just there - whether it is that the noise floor has dropped so making the fine details more audible or is the signal timing more accurate allowing the micro-detail to come into better focus. It is equivalent to a source upgrade, a better cartridge, change in DAC technology etc. Whatever it is and why, it is excellent.

NAS and ROCK server are upstairs connected to a GS108 as data backplane for main and backup NAS units, with port priority given to the playback stream between main NAS, NUC running ROCK and downstream connection. The Wireless AP, and a switch (GS105) for IoT devices are on different ports on the firewall router, with Virgin Media’s Router being in Modem-only mode.

The EtherRegen is downstairs with the isolated ‘B’ port to Naim NDS with Chord Sarum Tuned streaming cable. The A ports of the EtherRegen have the upstream connection (AQ Vodka), a UltraRendu running the SonoreUPnP Bridge (Chord Anthem), a RPi2 running Asset R6.4 UPnP server (AQ Vodka) and an AppleTV (AQ Cinnamon).
All switches, including EtherRegen, powered by LPS.
NAS and ROCK server also on LPS.

I have tried to ensure network optimization for the playback stream, from NAS to Network player, so the EtherRegen is the final piece of this approach with the ”moat” isolating the stream to the NDS.

So the Moat from A ports to B port is from Uptone Audio
“Going from port-to-port on the ‘A’ side of EtherREGEN is already better than most any other switch, but crossing our A ctive D ifferential I solation M oat (“ ADIM ™”)—to its ‘B’ side—brings an unmatched level of Ethernet performance for audio. On the circuit board photos you can see the EtherREGEN’s “moat,” across which sit the differential digital isolators.” 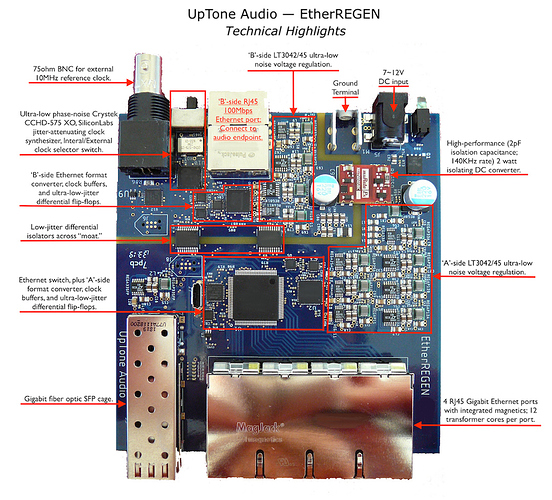 So check out the top section of the PCB, is completely separate on the multi-layer PCB. The B port is designed for the streamer or Ethernet driven DAC (streamer/DAC aka Network player).

On the image of the PCB where the extend of the isolation is clear.

There was lots of discussion about this switch as it was developed, but the SQ improvements from swapping out a CIsco 5-port switch to the EtherRegen and making no other changes is clear.

Sent my EtherRegen back as using it in my system i could not hear any improvements and i have a high-end system.

I was pretty much expecting this to be the result but thought why not give it a go.

That’s exactly what I would have expected.

So it has been seen there is a multi-week burn-in on these switches.
Out of the box there is some immediate benefit, but it wasn’t until week 3, that you suddenly go, wait I am hearing more, this is different, this is better.
So without this burn-in on this device, it is not possible to judge.
Many Hifi components have long burn-in process before giving their best, be it Amplifiers, Speakers, Cables.
And I’m sorry I don’t know why.

I got ER last week. My first impression is it DO enhanced SQ on some, but not all of my systems.

Tweaking Ethernet switch is common in DIY or computer audiophile communities for years. From different models to stack 2 with optical interconnection to modify PSU or clock circuits. As a IT engineer I tried some tweaks for fun before. Some works and some don’t on my systems. But communities doing these for purposes, not blindly shoot.

After putting about 100 hours on my EtherRegen, I went back to my old setup and was amazed at how much poorer it sounded. It’s easily the most significant sonic upgrade I’ve done in the last couple of years. I can’t imagine any decent audio system wouldn’t benefit.

Before you spend money on such products please read the review on “audiosciencereview.com”
When you digested the review give that money to charity.

Please contrast what is written on the ASR forum with what is written in this thread https://audiophilestyle.com/forums/topic/57519-uptone-audio-etherregen-listening-impressions/

Then, if you don’t mind answering the following

I always prefer a “measured” opinion.
This provides more information than : Quote simon_pepper: “I have so much more detail on every track played.” and it needs weeks to show performance and etc…
Snake oil alarm!
Before spending $650 on a network switch (!!) it is better to know how this thing measures.

“Listening is what matters”

So as per my previous response

Then, if you don’t mind answering the following

I suspect the answer to these is No

Information @simon_pepper, ASR Forum and the people at Audio Style provide are important points which should users guide to an educated decision.
That Uptone Regen network switch adds nothing positive or negative to the audio stream (as measured by ASR). It just costs you around $650 plus taxes and shipping. In my opinion it is better to give that funds to charity.

I ask again for your listening experiences on this topic?

I usually listen to music.
Not so much to devices.
Products that measure better have a good chance for sound improvement. So this might be a good starting point for decision on what to buy.
There are simply a lot of snake oil products out there which try to grab audiophiles money.
Some sing that fanboy song rather loud.

I suspect we will have to choose to differ and leave it here.

I have heard SQ improvements in my system and the configuration I described above.

You believe that there shouldn’t be any difference, but have not either heard a system with one applied or have not auditioned one for yourself in your own system.

A good source for information is also Archimago.

A 'more objective' take on audiophile topics among other thoughts... Twitter: @Archimago; E-Mail: archimagosmusings@outlook.com [Note that I have an Amazon Affiliates account. Some items may be linked to Amazon and I may receive some Amazon gift...

Just been through the recent postings on thar site and I can’t find any articles there that review switches or relate to this topic at all.

I suspect we will have to choose to differ and leave it here.

I have heard SQ improvements while listening to music in my system and the configuration I described above.

You believe that there shouldn’t be any difference, but have not either heard a system with one applied or have not auditioned one for yourself in your own system.

Just use the search function.
Anything related to network etc…if you are interested you will find

Read the Wiki about the TCP protocol and TCP/IP.
Good information there.

Yes, I understand how the protocol works.

My recommendation & comments on the configuration described above is based on what was actually experienced, through listening, the improvement to the listening experience and enjoyment of listening to music.
It is not based on whether I believe it should or shouldn’t make a difference.