I want to use software to perform crossover between main speakers and subwoofers (probably 100Hz 24db/Octave), apply FIR convolution filters for speaker / room correction (generated using REW / rePhase) and be able to vary delay to subwoofers to reduce room modes. Overall budget is up to £1,000.

I understand, from comments by @brian that the simple solution - having 2 DACs, connecting one to main speakers and one to subwoofer, applying filters in Roon to each one and then grouping them) will not work because RAAT will not keep the 2 outputs sufficiently in sync for this purpose.

Have thought of 4 ways to do this.

If anyone has any experience of doing something like this or has used any of the products mentioned I would appreciate your comments - or suggestions for alternatives!

You can also use something like a DSPeaker Anti-Mode 2.0 as crossover to integrate/correct the sub-woofer(s). You can still use a convolution filter in Roon for room correction as the Anti-Mode just controls the sub-woofer(s) (room modes). But you don’t need 4 DAC-channels when you connect the Anti-Mode after the DAC/Roon endpoint.

This way I get a good sub-woofer integration and a system that I can listen to even without Roon.

Thanks for the suggestion. Interesting idea.

Had a look at the manual. I want to be able to roll-off main speakers so that they don’t get low bass. Looks like I would need to Anti-Modes to do this (the manual refers to needing 2 Dual Cores for a 2.2 system). If so, would be expensive (£1,400 total).

Will keep it in mind as one option though …

I want to be able to roll-off main speakers so that they don’t get low bass.

If this is your goal, keep in mind that when you use an external crossover like the Anti-Modes or others that you will be using the built-in DAC (maybe even ADC) – while I don’t see a problem in doing so for the sub(s), I’m unsure if I would do so for the main speakers – unless you manage to find a pure digital one of course. So maybe Roon as crossover and a high quality 4+ channel DAC might be the cheapest way to go – but giving up the possibility to use the full system without Roon.

PS: There shouldn’t be the need to high-pass filter your main speakers if they are reasonably designed and IMHO lifting the bottom end just a little bit leads to an irregular slope/roll off and makes fitting he sub unnecessary difficult. I’m curious to hear others opinions too.

In the case of my system it sounds and measures better if I roll off the main speakers. Although the main speakers should, in theory, roll off smoothly below 100 Hz they are wall mounted and this lifts the bass. When the subwoofers are added this results in a peak in the response in the 80 Hz region. Whilst this can be corrected by equalisation I find that using a crossover (currently implemented in Roon with 2 DACs grouped together using the main DAC (Benchmark DAC3) at 100Hz for the mains and cheap DAC for the subwoofers) with both main and subwoofer rolled off at 24dB/Octave gives a flat overall response. It also means that the power handling of the main speakers is increased because they are not handling much below 100Hz.

I’ve looked at 4 channel DACs and - for the ones I have found - their performance isn’t good enough - certainly not when compared to my current DAC (Benchmark DAC3). I just found this:

What I don’t know is whether it will work with Roon (via USB). Based on things I’ve seen on the forum, together with my experience in trying to use 2 DACs asa an aggregate device under OSX, using Roon with a multichannel DAC can be problematic. I’ll email Okto Reseearch to see if they know whether or not it will work.

As I said: “If they are reasonably designed”. Mine (also wall mounted b.t.w.) are rated to go down to 80 Hz. While feeding full range music to them, as it is intended by the manufacturer, I never noticed anything unusual with them like e.g. big membrane movements or a “plock” sound that indicates that the voice coil has reached it’s physical excursion limit (and I enjoy listening to hip-hop and funk occasionally).
As my primary room mode is at 73 Hz I set the sub-woofer’s crossover to 60 Hz. I saw no need to put more energy in the frequencies above as they were already covered by the primary room mode or the main speakers.

I have a bit of experience here as I have DIY speakers with active crossovers. You mentioned OS/X, do you have a Mac that is currently running the endpoint?

One additional solution is to use a Pro audio interface as a multichannel output for your endpoint. Most of the better of these include SPDIF output that you could route to your DAC3 and get all of the sonic benefits there. Either of the Motu Ultralight AVB/mk4 would allow you to route Channel 1&2 to spdif out and use 2 of analog outs as Channels 3&4 to drive the subs.

Personally I use the Reaper DAW on a Macbook Pro with a Motu AVB for an eight channel DSP. The integrated DACs are just a notch lower performance than the DAC3, but well within transparency. I don’t think you need a full DAW to implement what you’re looking for, just a good interface that can provide a pair of analog outs that are clock synchronized to SPDIF into the DAC3. You can then use the DSP features in Roon Core to implement your convolution on the four channels of audio before transport to the endpoint.

That looks like a very useful suggestion.
Presumably the Motu connects to the Mac with USB - is that how you use it?
Does Roon see it as a multichannel device so that parametric and/or convolution filters can be applied to each channel?

Yes it is recognized as multichannel and connected via USB, you can set how many channels Roon will output to in the advanced settings channel layout. You could use the Mix filters in the procedural Eq to map L & R to 3 & 4. 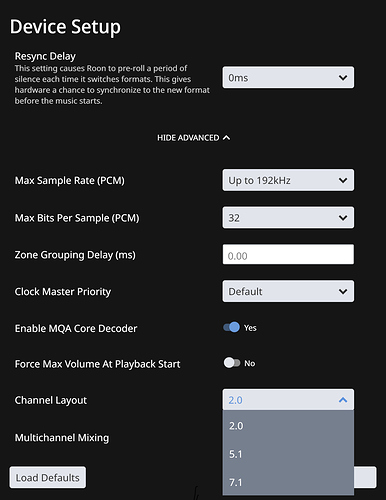 Have thought of 4 ways to do this.

I have spent lots of time experiencing. Filters can be implemented in many ways, hardware, software. The critcial part is downstream : quality of the DAC and the preamp.
With mini DSP product you get an OK quality but will not get access to high end audio (don’t knowing what your amps and speakers are).
I would say

The Okto DAC8 PRO is in my view today the best bargain, it will certainly outperfom the miniDSP SHD for DAC and preamp functionaiity. It’s around 1000€. Be careful it requires symmetrical amps. A 2nd hand Exasound E28 or E38 works too, can be found at 1500-2000€. Look also at RME products.

One friend had extensive tests with Motu but was disappointed at the end.

Hi Rémi,
Thanks for the suggestions - very helpful.

Amplifiers use Hypex modules (NC122MP with balanced inputs). Speakers are a bit unusual. I wrote about them here.

An alternative approach - which I’ve rejected for now - was to group the DACs using OSX Aggregate Device. This makes multiple DACs look like a multichannel DAC and allows one to be set as master. Unfortunately, Roon doesn’t work with OSX aggregate devices (and this has been a known issue for at least 2 years so I don’t see it being resolved anytime soon). Rogue Amoeba’s software Loopback does work with Roon - see osx aggregate devices - but it doesn’t have any facility to set on DAC as master.

So, I’m going to experiment first with nanoDigi and a good but inexpensive second DAC (Khadas Tone Board. That will let me do crossover in nanoDigi and apply FIR filters (for room correction) in Roon.

After that I might move on to the Okto DAC8 PRO (I can use the nanoDigi in another project) - a used Benchmark DAC2 (which Benchmark confirm would match my DAC3 well for this application) costs nearly as much as the Okto.

When you said that DAC8 “requires symmetrical amps” did you mean balanced inputs?*