Greetings! Strange problem…I use ExpressVPN on all my Roon connected devices (ipads, iphone) as well as my desktop computers. My Core is located on my QNAP NAS on a dedicated SSD as per the recommended setup. Until recently, everything functioned flawlessly (years of use). Suddenly, Roon will not work on any device while the VPN is active BUT it connects without difficulty from my desktop computers even though the VPN is active on the computer. When I turn the VPN off on the devices, Roon connects. Even when the devices are using the same VPN server as the computer, the device will still not allow Roon to connect to the Core even though the desktop will connect to the Core. Suggestions?

Try disabling network log in the settings; enabled by default.

Thanks for the feedback - I cannot locate any ‘network log’ option under any of the Settings sub-menus. Could you be more specific?

@Martin_Webster It would be appreciated if you could advise where this network lock is actually located in Settings??

Same issue has occurred for me with ExpressVPN after the Roon 2.0 release.

I have just been using a work around of turning off VPN, opening Roon on the iPhone or iPad remote and then turning VPN back on. Works for an indiscriminate amount of time depending on whether you have switched use and using other apps or browsing the internet. Mostly it will drop the connection within 5-10 mins if you don’t just keep Roon open on the remote.

I have only ever found the “Accept connections from remotes” in settings on the “Setup” page as this was set to off by default also by the 2.0 Release.

A PITA but if this network lock fixes the problem, it would be great.

I use an alternative VPN service, and when the kill switch is active, I cannot make the initial connection to Roon. This is quite common.

AFAIK your VPN has a similar feature and this is called Network Lock, i.e., no network traffic is allowed when the VPN is inactive.

You’ll need to refer to ExpressVPN documentation or support.

@Martin_Webster Hi Martin Thanks for that, yes I know what you are talking about. When the VPN drops connection all traffic is blocked. I believe that may be standard with most VPN”s… But if you turn off the VPN yourself then you can still access the network and internet, you are just not behind the VPN anymore.
What is happening here is that since Roon 2.0 the remote no longer sees the Core or visa versa when the VPN is connected as it had been able to do for the last 10 months or so I’ve been using Roon. What I’m saying is that I have to turn off the VPN manually (click the disconnect button) connect the Remote to the Core and then I have to turn the VPN back on. But if you don’t keep the remote open on the iPad or iPhone (to browse or check emails etc) then it will just disconnect from the remote again and I have to go thru the whole process again and again. For example it will stay connected overnight with Roon playing, the VPN on and the remote open on the iPad and I can pick it up at anytime and it is showing now playing or the queue correctly.
I would tend to lean towards that being a bug that was perhaps introduced with Roon 2.0??
Only support and/or developers will probably know for sure and perhaps many like me will tend to find a work around like I have done knowing that it probably going to take a long time to get an answer from support given the still ongoing amount of support requests for issues with 2.0/1.8 and ARC.
Not being unkind, but I won’t be holding my breath waiting for a definitive answer.

On my iPhone, Roon connects with the VPN enabled, but not if I use the kill switch. This is unchanged since the release of Roon 2.0.

Because of the way iOS works, it is not possible to access devices on your local network when the kill switch is enabled.

Turning off manually is not “the kill switch”. The kill switch in ExpressVPN is inbuilt if the ExpressVPN service or server goes down, it stops all connections. If you turn off manually you can access network and internet, you just don’t have the protection of the VPN hiding your IP address.
The point is that I also was able to connect Roon with the remote when the VPN was enabled before Roon 2.0. Not since…. That is the problem. It doesn’t work now the way it did before…

Turning off manually is not “the kill switch”.

If the kill switch AKA Network Lock is enabled, you won’t have access to the local network whether the VPN is active or not. This is a limitation/feature/behaviour of iOS.

I don’t think you have confirmed whether this is enabled or not. Please check.

What has not been addressed yet, and what is perplexing me the most, is that I do not have this issue when using Roon on my desktop while the VPN is active. It only occurs whilst using my iPad or iPhone. Has anyone else noticed this or have any thoughts?

It only occurs whilst using my iPad or iPhone. Has anyone else noticed this or have any thoughts?

As posted earlier, it’s how iOS works, so “it is not possible to access devices on your local network when the kill switch is enabled.”

@Martin_Webster I can confirm that the ExpressVPN Network Lock is turned on on the iMac (core), iPhone and iPad as it has been for the 7 years I have had this computer. Note that the feature is turned on but the Kill Switch only activates when the VPN Server/Tunnel goes down.

On ExpressVPN the local network has always worked and there is also a further switch that I also have enabled that allows local network traffic to continue to work once the Kill Switch is activated if the VPN Server or Tunnel goes down.

Obviously before Roon 2, nobody told my system that they were not supposed to work because of a limitation in IOS. They just did!! Now they don’t.

Therefore I reiterate my earlier thoughts that this has something to do with the latest release.

Just for your information, I can also confirm that if I switch off the router, Roon stops immediately even with local files playing. That is now in line with what Roon has stated numerous times. The previous situation before Roon 2 was that streaming stopped immediately, however I could continue to play music if I had a local album on…

The issue seems to affect ExpressVPN only; I’ve not seen any other reports about this, and my Proton VPN continues to work as it did with Roon 1.8. Therefore, as previously said, please refer to ExpressVPN documentation or assistance from their support to establish why discovery fails when the VPN is active.

Alternatively, wait for a member of the Roon support team to respond.

Incidently, there is no kill switch on their iOS app.

As I have stated previously, I have a workaround so I’m happy to wait for support to get around to it… I’m in no rush and going nowhere so no skin off my nose.

What does cause some concern is the generalised statements that IOS doesn’t allow it (when it has been allowing it for years eg remote control of my Apple TV, Sonos System and Roon up until 2.0) and your assertion that the ExpressVPN doesn’t have a kill switch for IOS devices.

I’ve attached the screenshots of same on both my iPad and iPhone for you to see that indeed they do.

Hopefully that information will be of use to support for others in future. 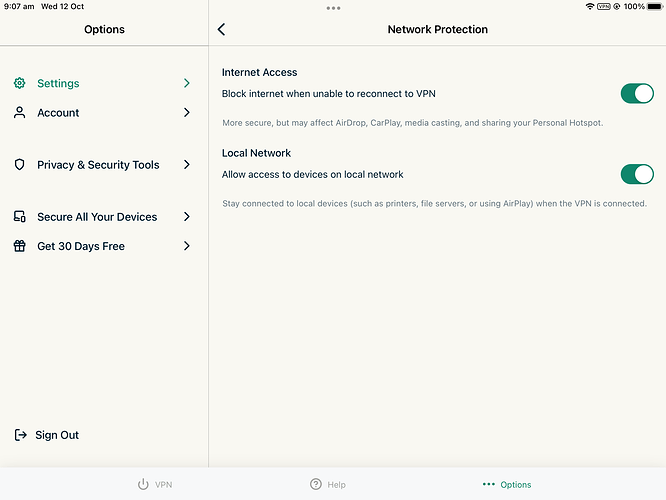 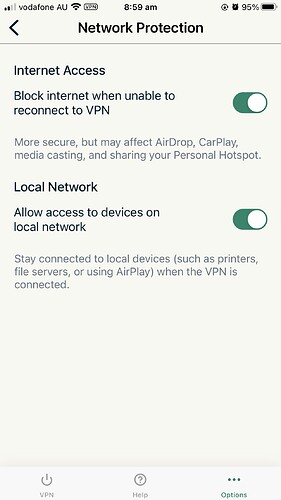 Update: after playing around for a bit, toggling the “Network Lock” in the ExpressVPN Settings on my iMac and doing the same with the “Internet Access” toggle under “Network Protection” that Fergus has just posted, suddenly things appear to be back to ‘normal’, meaning that with my VPN engaged across all devices and computers, Roon is once again connecting seamlessly to my Core from all remotes. I do not understand why this has changed!

Great to hear @Gregory_Garbin I don’t understand either but glad to hear that it is working for you now. I’ll keep toggling and do a few restarts to see if that helps in some way.

Are you certain the kill switch was available? According to their website, and other information, iOS doesn’t have Network Lock. Maybe they just released that with an update?

Hi Martin. I have had a look back thru the update releases for ExpressVPN. I knew that a change occurred around the time I started using Roon and it was this:
“ 2021 December 15version 11.25… We’re excited to roll out Threat Manager for iOS users - a new feature that prevents apps and websites from communicating with trackers or other malicious third parties without your knowledge.”
The Network Lock, however, was only introduced on 15 September 22, so a week before the Roon 2/Arc release. I thought it was well before that. Applies only to IOS 14 and above and interesting that it notes that it can interfere with features such as AirDrop, CarPlay, media casting and Wi-Fi Hotspots. So I have to assume that it is interfering with Roon 2.0.

Nice that Gregory got his to work, but I have tried so many router resettings, core restarts, remote restarts on next core restart, ExpressVPN restarts and resets in the last few days that at this stage I’ll just keep going with my workaround of Closing all websites, Emails, Internet Connections, Turning off VPN, Starting Roon Remote, Restarting VPN and then restarting Emails and Internet Connection till hopefully ExpressVPN come up with a fix.

If they do, I will update here so that it gets into the Knowledge Base. 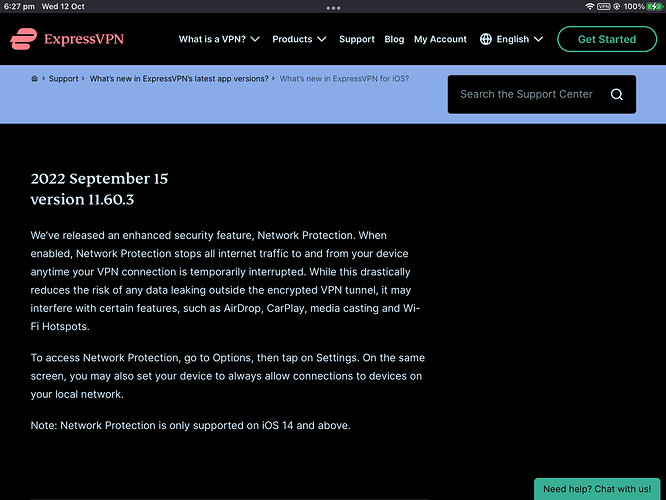