What streamer do you use?

I’m a bit u sure of the definition of streamer?

I’d say a component that takes packetized digital data from the network (local with the roon core in this case or other streaming protocol like airplay, or internet radio etc) and provides that data to your stereo either in digital form or analog form. But that’s just my definition.

I use a Roon Nucleus to stream Tidal and Qobuz to several Roon end-points and play-back systems including a Bose system and three headphone systems.

Salkstream III, connected to my Anthem AVM20 pre/pro via optical SPDIF, and to my Oppo 103 via HDMI (which in turn is connected to the Anthem via multichannel analog).

I like the simplicity of Roon and my local library being in one device. Sounds fabulous!

I use a plethora of streaming solutions on a daily basis, not just Roon-based.
In my listening room at home i have an Aries G1 feeding a Nagra DAC, this is my reference. I also have a Bluesound Vault/Node and an Aries Mini in the same setup, and use either Roon or BluOS or Lightning DS to control and stream.
In the kitchen i have an IKEA/Sonos speaker for cooking entertainment, used mainly as a Roon endpoint, but occasionally i glimpse the Sonos software through the iPad.(still a sorry mess imo)
Bedroom has got an Aries Femto feeding a Moon 430HAD for evening listening.
Finally living room has a Bluesound Soundbar, but this is nearly never used for music. (i dont like the sound of it)

Depends , main System is Naim Atom which is a Roon Ready all in one system. Raspberry Pis used in 3 systems, NUC in my main headphone system with RME DAC, Chromecast audio and a Chromecast enabled speaker.

Hi, I’m running a mini Mac core into a lumin U1 mini into a DirectStream DAC. The U1 mini is a fantastic unit that is built well and, most importantly, sounds great. Highly recommended. Even playing Apple Music over airplay sounds good where normally Apple Music sounds horrendous on anything.

I like the flexibility of a separate streamer and DAC.

Roon Core runs on a sonictransporter i5. Got this two or three years ago. Rough start with this. I think I had it replaced twice within a couple of weeks. Bum units I guess. Anyway, it’s been great since then.

Main rig runs on an Ayre AX5 amp to a PS Audio Directstream DAC with Bridge II as the streaming device. I’ve been very happy with that. This replaced a Auralic Aries which I’m now using on my second system.

The Aries is very good for sound quality. Not in love with their app or set-up procedures. A little quirky and it doesn’t play particularly well with UPNP which I still need occasionally. Works well with Roon. I run it with an Ayre AX7e amp and Ayre QB9DSD DAC.

My headphone rig uses a Sonore Ultrarendu to an Ayre Codex. You may have guessed I like Ayre stuff. Not the best UI but great engineering and most importantly, great sound. The Ultrarendu is excellent. Easy to set up, great sound, trouble free. This replaced a Microrendu which I still use on a small system in another room. These are also great (see previous comments on Ultrarendu).

I used to have an SMS100 which I liked quite a lot but it was pre-Roon so I don’t use it any more. Still useful for UPNP though.

Living Room is Mytek Manhattan with its own streamer. Bedroom is Aries mini. Sonore microRendu will be used in Music studio, now under construction.

Bluesound Node 2i, but hope to stream directly to my Hegel H390 sometime soon.

I’m using Roon Nucleus (1TB Samsung 860 SSD) as the core and streamer powered by an Sbooster LPS. The Nucleus is connected using a Morrow Audio Reference USB to the DA1 DAC on a McIntosh C49 preamp. Very simple, fast, sounds great and I don’t need another box or cable. Second system is Nucleus to Windows 10 PC and HDMI out to a Denon AVR x6300. I use a wireless mouse to control Roon while sitting 20 ft from my computer and viewing Roon on the big screen. This system sounds better than I could have hoped for. My first Roon system was my PC as core and ethernet to a Bluesound Node 2i and RCA to a C45 I owned at the time. It worked, sounded great, and got me to the next level. The Nucleus relieved my PC from core duty which was more complicated by Windows updates, going to sleep (password used for protection from wireless thieves and hackers), firewall problems, network problems, etc. I am a Roon lifetime member and very happy with the service. 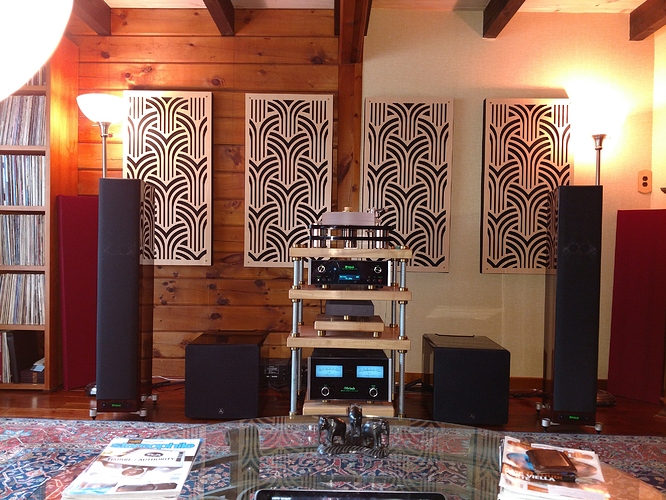 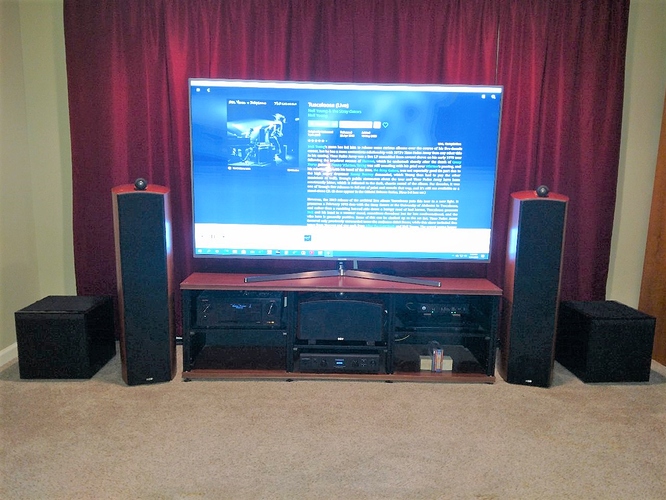 That big McIntosh power amp is like something Sarah Connor warned us about.

The stuff of dreams!

Thanks @tomnpegs it,s crushing my skull as we speak!

Running Rock on a NUC8i5BEH with internal 1TB Samsung SSD as a network share with my music on it, network streamers are Allo USBridge Signature running Ropieee into a Topping DX7s in the main system, an Rpi4 with official RPI 7" in touch screen into a Leaf Audio 32 bit/384K dac in the home office, and an RPi4 into a Topping DX3pro for headphone use. All of the end points run Ropiee, so 3 zones total. Very reliable and sounds very good, no issues at all in the six or so months since I chose Roon for serving my digital music.

Nucleus Plus via Ethernet through router to Allo USB Bridge Signature player running Ropieee (Thanks Harry!!) out via USB to Denafrips Ares II DAC out via RCA to Rogue Audio RP-5 (with lovely Brimar 12au7 NOS tubes…mmmmm) to Rogue Audio Atlas Magnum (also with Brimar input tubes) out to Joseph Audio Perspective2 Graphene speakers. To suggest I’m not unhappy with the sound would certainly be a gross understatement.

I will also note that the other evening I hooked the Nucleus Plus directly to the DAC via USB (yes, I know…an awful thing to do

) and it sounded just fine to me. I didn’t do any significant critical listening, but on high res files streaming through Qobuz (via Roon) I didn’t immediately hear much difference without the streamer and since I only use my local library and Qobuz, or play vinyl, I’m beginning to think I don’t really need the streamer, especially if I go with the SBooster LPS for the Nucleus. Considering upgrading to the Terminator to replace the Ares II DAC.

There has been no problem using the USB out of my Nucleus. It sounds fine. I forgot to add that I am using the $60 AudioQuest Jitterbug in the USB chain and it did improve the sound quality.