Where are the covers?

It seems Roon has a problem with covers today. Specially with Tidal. Ripped a few albums today, among them Blackfoot Original album series. Roon cant come up with covers for any of them. Added some albums from Tidal also and didn’t get any covers for them either. Looking at Tidal though Roon right now I’d say every fifth album is with a cover. What’s happening?
/Jonas

Just noticed that most of My old albums in Roon doesn’t have covers. Is this problem local maybe?

Sorry, but it seems that it’s mostly Tidal. IF I choose an artist and scoll down to Tidal main albums, they are all blackened.

I think this should be fixed – can you confirm @Jonas_Sjodin?

Fixed! Was something the matter?

Actually, it´s not. It sems most Tidal albums in my library are fixed but when I go into Tidal ther´s no difference compared to yesterday.

I’m having the same problem. Just added Amused to Death from Tidal and no cover: 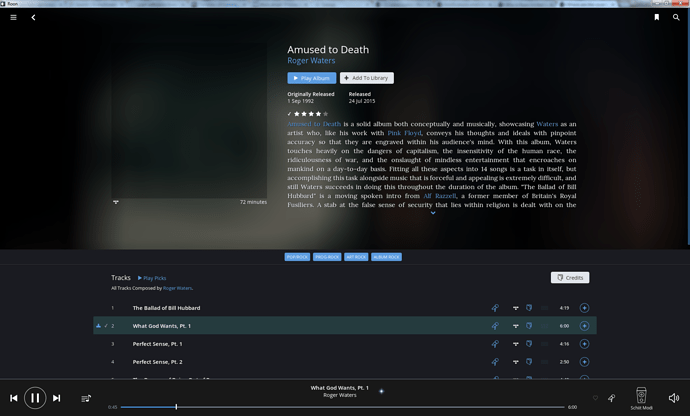 We can see the issue, and it’s on our server. It should be better now.

We’re still investigating the cause, so let me know if you’re seeing otherwise or if this recurs guys.

Thanks for the report, and sorry for the trouble all!

This morning (Europe) again no covers with Tidal.

My installations too started experiencing this behavior, beginning a bit before this thread got started. Problem went away for the last 24 hours, but has since returned.

No Tidal covers here either. Blowing away ~/Library/Roon/Cache/tidal* made it worse…

I’m also having trouble with Covers from TIDAL.

I added some albums in TIDAL and now I’ve launched Roon the Cover Art is not there.

Also the same with some Playlists I created in TIDAL, the cover art is not there.

How far is a fix away?

We’re working on it, guys. Stand by.

Ok, guys this should be better now. Let me know if you’re still having issues with covers.

All fine (and fast). Had to restart Roon @ core though.