White screen when minimized on Windows 10

My Roon does this white screen thing. If I minimise the window.Seems like an old thing but it happens to me.It never used to.I am Windows 10.
Was a solution ever found?

The problem lies, with the graphics card driver …

I recommend going to the graphic chip manufacturer’s (not MS Windows) website and downloading / installing the latest version fitted in your machine.

I just tried it, device manager and updated drivers but didn’t work

I asked windows to update it and it said it did. Is there a better driver elsewhere?
My driver is “internal Intel® HD Graphics” and driver version ,
10.18.10.4358

Do I need to get a new graphics card to make roon work?
Thanks

** I also went to Intel website and installed , from them, prog that scanned and updated driver but still same thing

Is it a laptop or desktop you are using?

It’s a desktop. I am quite happy to get a reasonable graphics card, just not sure what is best for roon.
There were problems with the GeForce GT 710, can’t remember if it was with roon, but thats why it was on internal graphics. So need to change the GT700 to something better.Any suggestions I would be grateful.

Can I please ask you to provide the following? 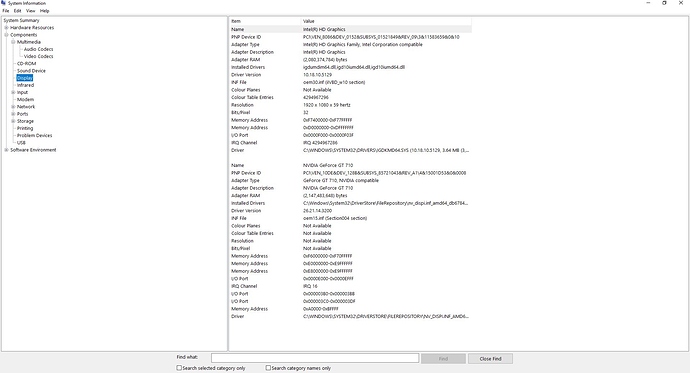 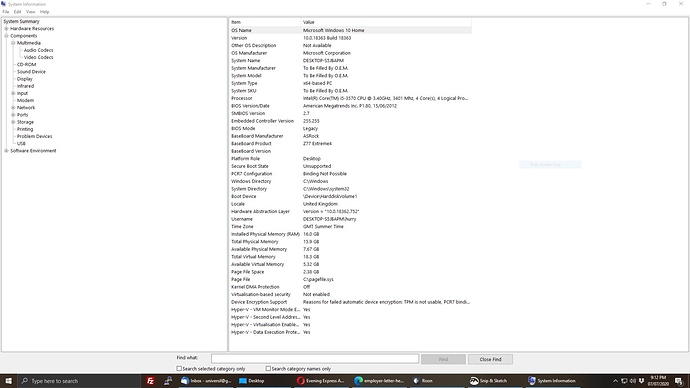 Hope this is right.
Thanks

Not a huge issue for me , but FWIW I am experiencing the same issue using an older Acer Iconia W700 tablet used as a Roon remote. Interestingly it is running onboard Intel display drivers as well.(Intel HD Graphics 4000)
Went to Intel and updated to the latest drivers - no change.
The “White screen” occurs only when minimizing - resizing is fine. When the white screen occurred, I tried to resize, reposition the Roon window to force the window to invalidate and repaint, but no change.

Yes Vince, same for me, it is not the end of the world since i mostly use a tablet to control roon, so as long as the server is working its not so bad. But if buying a graphic card that is not to expensive can solve the problem, then that is waht I would do , (on principle).

Is there a better driver elsewhere?

Yes, you go to Intel’s web site and download the video drivers from them. What gets put on Windows update is not necessarily the latest version.

What is the model number of the CPU and I can double check on Intel’s site.

I have done that via intel and it is definite latest driver, sadly didn’t work.I have logs and system info above.
Thanks

Thanks for the logs + screenshots @Michael_Hurry, I have added your report to the investigation ticket.

I plan do discuss your report with QA, and once that occurs, I’ll follow up here.

I’m still waiting to hear back from QA, but I had another though here, can you please try opening up the Roon app explicitly with the Geforce GPU? Instructions are here under the Force App To Use NVIDIA Graphics Card header.

Thanks noris,
I am really reluctant to try to use the geforce card in the PC because the reason I switched to internal graphics was when we “upgraded”, to windows 10 we had all sorts of problems .Primarily the pc would boot up but go to a black screen,(Even with a fresh install). In the end it was pinned down to something about the graphics card and the solution was to go to onboard graphics.This resolved the problems ever since.
I am no computer expert, and it was my local Techrescue experts that came up with that.
I have never known what was the problem with the card, but I have known the awful inconvenience it caused. Perhaps the card was just too old or something.
Surely it should be ok if necessary to update to a newer card.

Finally I can manage the white screen issue on the PC since i mainly use an IPad or Galaxy Phone to control Roon so it isn’t a disaster as long as the server works. But I would like it to work on the PC just because I hate things not working.

Thanks for the info @Michael_Hurry, understood. While we’re going to take a look at the issue and see what can be done, it will take some time.

It does sound like you have some issues with the old graphics card even outside of Roon, so you may want to upgrade it nonetheless.

Noris,
The only reason we never updated it at the time is because they convinced us that we wouldn’t require anything other than onboard for our usage,but yes it should now probably be upgraded.Its’s a shame that the onboard intel cant cope with a Roon shut window but minimising has no problems.It’s good that it’s looked at and perhaps it is more to do with the intel drivers than it is with Roon anyway.
Thanks again