Why does Roon Radio favor streaming?

@danny - these screenshots confirm that equivalence was achieved, would you agree?

Pretty sure I’m seeing this ‘problem’ too - and I also find it both strange & slightly annoying.

The only thing I’m wondering about is whether Roon Radio chooses a Tidal album version which is perhaps the USA release, and my tags specifically list the EU release version?
Not sure the algorithm’s that sensitive though.

I’ve had a similar hypothesis as I moved from the US to Europe last year and it’s possible Tidal might think I live in the US based on the payment method. Like you, I’m not sure that factors into this.

a Tidal album version which is perhaps the USA release, and my tags specifically list the EU release version?
Not sure the algorithm’s that sensitive though.

This is untrue. Roon will play local / higher quality versions if they match.

Hmmm. I haven’t used Radio in a while but right now Roon Radio picked Gimme Shelter - a Qobuz 24/88 version when I have a 24/176 that is the primary version in my local collection.

Click on the now playing track, go to the Let it Bleed album, then Versions, and both are under there. Total track equivalence and yet Roon Radio did not play Primary Version.

Update: I noticed this happening repeatedly with very common classic rock songs that I clearly have like 10-20 copies of, all from albums identified by Roon.

There’s no chance, really, that Roon Radio always plays the identified primary version of a track. Clearly not the case.

Further Update: after another 2-hour Roon Radio session, every song Roon played, I have in my local collection, identified. Roon did not play one local track.

As posted before, my experience is much the same. Nearly all of my local library is 16/44.1 CD rips. Now if Roon could look at Qobuz and say aaah, there’s a 24 bit version there. He’ll like that. Lets pick that one instead…I’d be happy with that.
What actually seems to happen, though, is that Roon picks the Qobuz version every time. That wastes my very limited internet bandwidth. I don’t always bother to check, of course, but I cannot recall noticing any exceptions to this.

Yes! Since I noticed it, I have been paying more attention to see what Roon does. To my observation, Roon does not EVER play a track from my local library when there’s a streaming version. This does seem recent. It is certainly not a fatal issue. But does seem like a waste of bandwidth. Actually, I have just noticed something. I don’t think the problem is with Roon Radio per se. And I am pretty sure I would have noticed this issue before if it had been around a long time, so it MUST b… 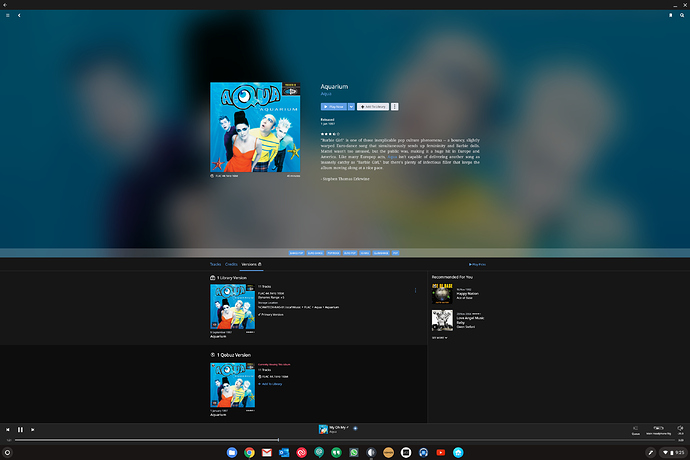 I am unable to reproduce this. Also not what I saw in my post earlier

Even more bizarre. I’m glad I took screen shots. I’m certainly not wishing whatever that is to be broken for everyone!

I have noticed it doesnyt use my files for Roon radio at all any more. Its used to but not these days.

I have noticed it doesn’t use my files for Roon radio at all anymore. It used to but, not these days.

When roon radio selects a song I own, I would prefer that my file be prioritized over any other version. After listening to my file I can determine if it sounds good and if it is worth searching for a better quality version on Tidal or Qobuz.

I agree. It’s pretty frustrating as Roon never seems to pick my local version. I’ll need to check to see how it counts the number of plays I give each track. I assume it lumps them back together - it looks like it does. That means it knows it’s the same song, so why default to lower quality version?

I have just about every Pink Floyd album imaginable in my local library, but it defaults to Tidal, every single time. It must be in the algorithm/coding, right?

Roon definitely prefers streaming services even if I have the same file locally tagged correctly. Multiple songs after another and its almost always streamed despite owning it. It bugs me too.

@danny do you agree that Roon favoring streaming is a legitimate issue for some of us? This post illustrates the problem. Should I post in the Support forum with the specs of my setup?

I actually have the same problem. I have Tidal integration and when Roon Radio is on it always selects titles from Tidal, even when a HiRes version of the same song is in my library. To me it seems the algorythm is actually taken from Tidal and not Roon native, So it is Tidal Radio, not Roon Radio

Seems like you would want to favor Tidal or Qobuz and play music you don’t already have.

For music not in my library, definitionally.

But, if what the algorithm picks to play next is IN my library. I want to hear my library version, not the version on Tidal.

In other words, if Roon Radio decides to play “Ripples” from Genesis’ “Trick of the Tail”, I want it to play the version in my library, not the version on Tidal, or, Qobuz.

I was about to post in the #support category, when I found this response from @dylan to what appears to be the same issue being discussed here. Dylan points to this post by @mike who explains Roon Radio currently uses extra conservative matching at the track level rather than the album level. The idea is that it’s better to play a low resolution version of an exact track match than a high resolution version of a remix, demo or outtake of the track.

I understand the rationale, but I’m skeptical this explanation accounts for the kind of behavior I’m seeing. I cannot recall Roon Radio ever picking a track from my library. Which is why I end up not using it.

I guess we all have our opinions of how this should work and that’s OK. For me, if I want to listen to music in my library, I can do that. I don’t need Roon Radio to do that. I usually start out listening to a full album, then Roon Radio takes it from there.