Why does Roon take up so much space?

Android tablet as controller and tells me Roon is using 27GB of storage space. How could this possibly be healthy? I believe the artwork cache is set to just a couple hundred MB. Why would Roon need 27GB of storage on a controller?

Is that in the user storage or cache?
You can always clear the cache, but mine is only 135KB for and 40K+ library.

My storage is 5.1GB but I have a lot of large images. If you remove the storage it will have to be redownloaded, but it is worth trying that or uninstall and re-install

I’m sure another user noticed this ‘bloating’ issue and a reinstall fixed it. Can’t find the thread though.

Roon is taking 13.68GB on my iPad Pro 9.7 with 32GB runnning 14.7.1
My library is 94k tracks/7k albums.
Yes I have some large images for album artwork, but I think something is broken in the caching strategy and mechanics, as this is extensive for a controller application.

Have you tried reinstalling?
Something is probably screwed up there…
I have about 200K tracks and use several different Cores and still this is what i see: 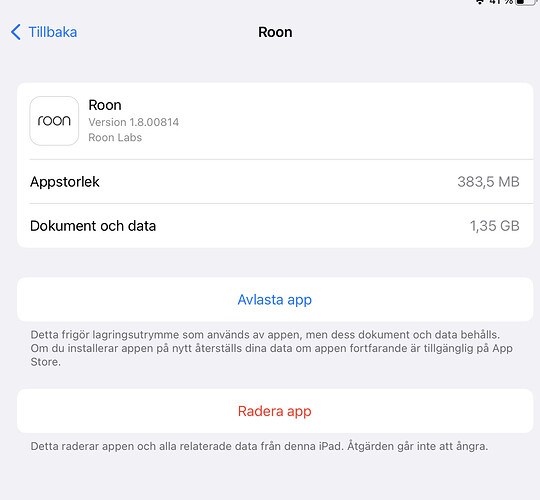 I have a similar problem that builds up over time. My solution is to clear cache and clear data. I then need to configure the app with my preferences (dark mode etc.) but the storage space returns to normal.

Why would Roon need 27GB of storage on a controller?

Sorry, no one knows outside of possibly Roon dev’s, and they ain’t saying! I’ve also noticed it grow on my iPad, a delete and reinstall fixes it for a few weeks.

I think what is more interesting here is not so much the physical space Roon takes up per SE but WHY some are affected and some not?
What is the driver here?

Can’t remember when I last cleared the cache on my droid and I use it just about every night for Roon.

Ok, so I deleted Roon and all stored data from my iPad Pro & iPhone 7

It actually took a while to process the deletion and for a while you could watch as the data was still being deleted from the ‘Other’ category within the storage usage display.
Once storage usage stabilised, cleared all running applications, rebooted the device and then re-installed Roon and applied a few config settings to get it back.
Data usage by Roon is now 359.4MB, let’s see during usage over the next week or so whether this gets back up to the gigabytes.

However I still think there needs to be better storage caching and management in the iOS App.

My modest music collection, ~1100 albums = 14000 tracks or so, is using 1.7 GB of data (not counting the ~360 MB app itself). My album art is all over the place in resolution terms, but generally higher rather than lower. I’ve been running Roon on this iPad for many years, updating as new releases arrived, but have never re-installed.

So it would appear that cache management doesn’t work correctly for some users, and this results in a storage leak. You’d need to get @support involved if you want to pursue debugging this.

My android cache s starting to grow it did get to over 5gb on my previous phone now at 2.5gb in the data cache. Not many hires images and a modest library size of 3784.

And this is what I do not understand here?
Why are some droid users, like yourself, affected and others like myself not?
What/where is the difference.
I have something like 80,000 tracks and lots of album art but my cache is relatively small at 1.25gb or so and it never seems to change much, no more than I would expect from just the constant additions of albums over time.

A friend of mine actually had the same issue on his iPad 2018 today. Roon was consuming 15Gb of his total of 32Gb with the result that the iPad pestered him to clear used space…
We reinstalled and his 150K library was fine again. He is NOT a power user, only uses Safari, Facebook, Messenger and Roon.

As has been questioned before; Why does this affect only certain users? And what the h*ll is taking up so much space?

My iPad does this regularly but my android pixel 4 has never done it so it’s pretty hit and miss and very annoying on the iPad as it takes forever to remove the app and clean up the storage if it gets over 15gb which can happen in a matter of weeks sometimes.

I have Roon on my iPad and iPhone. Bizarrely my cloud storage on the iPhone was less than 2gb, but the iPad’s was full, and all down to Roon. Having now deleted and restored the app, my iPad cloud storage is back to normal.

I noticed Roon was taking up 9gb on my Android controller. I cleared cache and this reduced memory usage to 6gb but the artwork for many albums now doesn’t show. I’m worried about reinstalling as Roon isn’t backed up and I don’t understand what is being stored on my controller app.

I mainly stream from Qobuz but have a handful of albums stored on my Zen Mini.

Any advice would be appreciated?

I don’t think you need to worry about losing anything critical when uninstalling / reinstalling the control app. I’ve done this a couple times and lose nothing except local configuration items like light/dark theme and display preferences. The last time I did it I didn’t bother clearing my play queue and it was picked up and resumed upon reinstall.

To topic: I uninstalled and reinstalled and the 27Gb was removed, though it took a LONG time to complete uninstallation. Now down to 300-ish Mb, we will see what happens… But this isn’t the first time I’ve had to do this for exactly the same reason.