Why is Roon splitting my albums up?

I don’t know how to fix this. I look under an artist and one album shows as two or three different albums. I see multiple instances of the album with a the songs spread amongst the instances. Example, Porcupine Tree, Stupid dream shows as three albums with the same name. The songs are spread out amongst the three instances. I look at my folder structure and these are all in the same iTunes folder. Several other artist have the same problem, one album show as multiples under main albums.

Any idea how to fix this? This is frustrating, I cannot listen to an album and get all the songs.

Check out Merge Albums under Editing and Grooming Your Collection in the Roon User Guide.

Thanks! I am wondering why this happened though. This has happened to a bunch of my albums, all burned from CD’s and in my iTunes library where they show correctly as one album. I have to go through a bunch of artists now and fix this, UGH!

Check one of the split albums in its folder . Check the album tags too.

Roon usually splits albums when it sees inconsistency in tags.

I had this exact problem, when I looked into it. I noticed that my file tags had either multiple disks tagged (when it was one disc ) or that the whole cd had been tagged as cd4 (for example), it looks like Roon does something funny in this case. When I fixed my tags and re-scanned the cds sorted themselves out.

Stupid question, how do you check these tags on a MAC?

Put tag editor in the forum search. There are many threads on the topic. Here is just one

It’s down to personal choice, and there’s plenty to choose from: Personally, I happen to use MediaMonkey in combination with the File Explorer shell extensions of dbPoweramp.

I guess I need to do some research as to what these tags are and how to view them. These were fine until a couple of weeks ago and then suddenly about 50 albums were split up like this.

It is really encouraging that someone from Roon actually comments on this. The albums are grouped right in iTunes, in Audirvana plus, but not in Roon. They used to be right, but something happened in Roon. I don’t understand what is meant by having multiple disks tagged. What does that mean?

Really frustrating that Roon support is not helping out on this!!

Is there some post that gives guidance on what to look for in tags in order to fix them? Very confused.

Also, can you post a screenshot of the folder structure and tracks in iTunes for Porcupine Tree, Stupid Dream?

Here is a screen shot, I merged the album already. There were about 30 other albums this happened to. 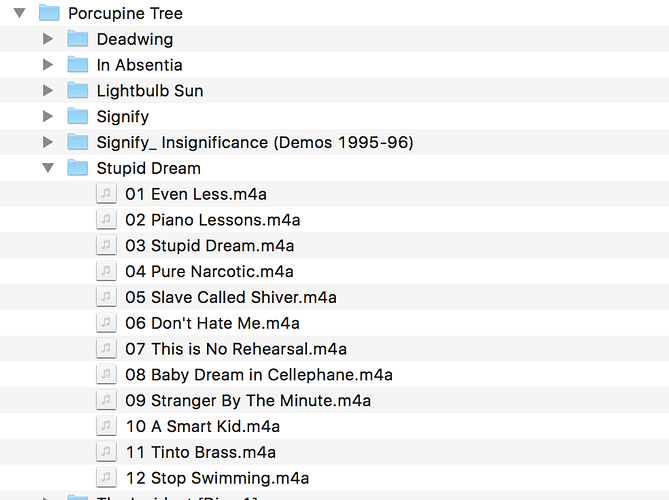 Here is another one that had to be merged. 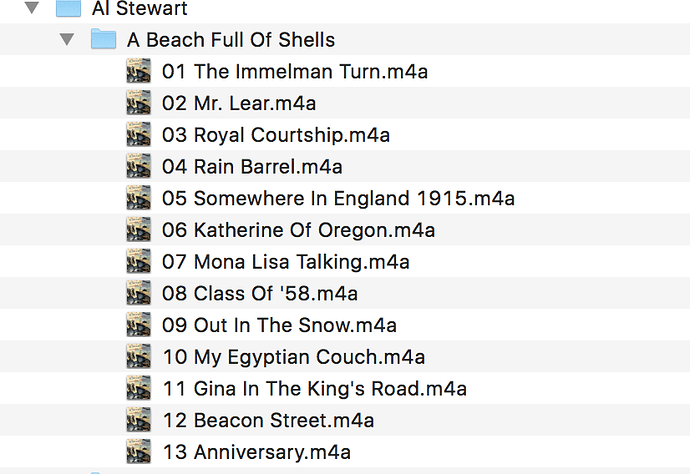 You can actually check (and modify) your tags right on Audirvana+, although for large numbers of files, it gets slow.

From the screenshot below, I have selected the following fields:

Now make sure that The data for:

To change the values, you can open the metadata view by going View->Show Metadata (you can change them one track at a time, or multiple tracks in one go) 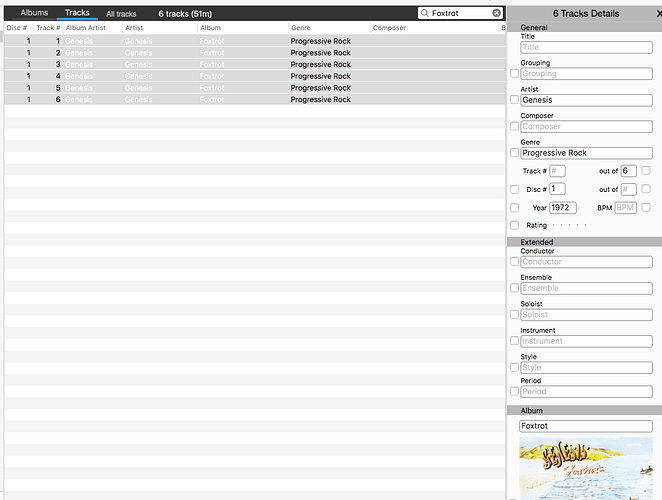 I’m seeing this as well and its extremely frustrating to the point of making me decide whether to give up on Roon – I have 2753 albums but Roon thinks I have 3826 – clearly too many to fix by hand. They are all fine in Audirvana+ – the metadata is the same as they were all ripped at the same time (or from the same download source).

This is new as I don’t recall having this problem until a few weeks ago – yes, the odd album was split and I could merge, but nothing this bad.

What changed and is there a way to fix this – perhaps nuke the library and start again?

Is it related to using the “Organized Folders” option as I switched to that, but don’t recall if this happened before/after and I switched the core from my iMac drawing from my NAS to running the core on my QNAP NAS?

Is it related to using the “Organized Folders” option as I switched to that, but don’t recall if this happened before/after and I switched the core from my iMac drawing from my NAS to running the core on my QNAP NAS?

Do NOT use Organized Folders. It’s a recipe for disaster. There are multiple warnings about it both in the forum and in the User Guide. The feature is marked for removal in a future version of Roon.

There is another post of this happening in this forum. Same thing happened to me, no idea why. Not using organized folders but numerous albums ended up splitting a couple of weeks ago.