24/44.1 FLAC incorrectly playing back as MQA

Bit of an odd one here. I recently purchased a 24bit download of Jon Hopkins new album, and when playing I noticed that the signal path changes for one particular track, even though they are all identical FLAC file format. 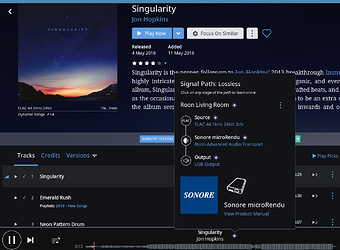 When I play the second track it changes to MQA: 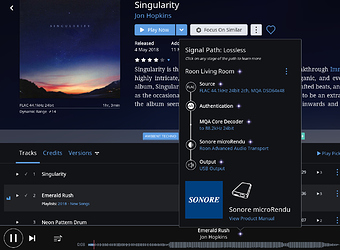 It reverts back for track 3: 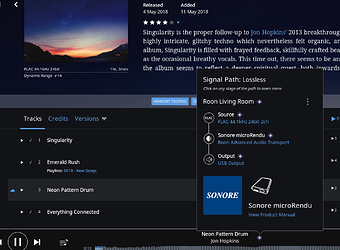 The only difference is that the effected track is in a playlist. Before purchasing I did have the Tidal version of the track in the playlist, but I have removed it and checked that it is not in my library anymore.

Any thoughts as to how to fix this one?
Nick

Hi @Stampie ---- Thank you for the report and sharing this observation you have made with us. The insight is appreciated!

Moving forward, would it be possible for you to send over the second track from the mentioned Jon Hopkins album (“Emerald Rush”) for analysis so we can try and determine what is triggering this behavior?

If you could send the media sample via a shared dropbox link in a PM addressed to me it would be greatly appreciated! If you are not a dropbox user, no worries, I can offer another upload method. Thanks!

Folks: I have a single track (Get Behind the Mule) from a 96/24 flac download (Tom Waits’ Mule Variations) that is showing up as an authenticated MQA track (see screenshot). When I play it nothing happens and it locks up my Directstream/Bridge II combo. I have to re-boot the DS! [image] This file came from HDTracks. I have downloaded it twice (in case it was corrupted somehow) but with the same result. Also sent screen shot to HDTracks to see if they have an issue with file Anyone else…

Roon support looking into it.

Thanks @Stampie, confirming that the media has been received! Once the team has completed their analysis I will be sure to update you (and this thread) accordingly.

Your patience is during this process is very appreciated!