I got the lifetime sub recently and it updated my Roon 1.3 to the current version (build 218). Afterwards, some albums are not displaying properly (blank or black).

For example, the Mary Poppins soundtrack shows no image art. 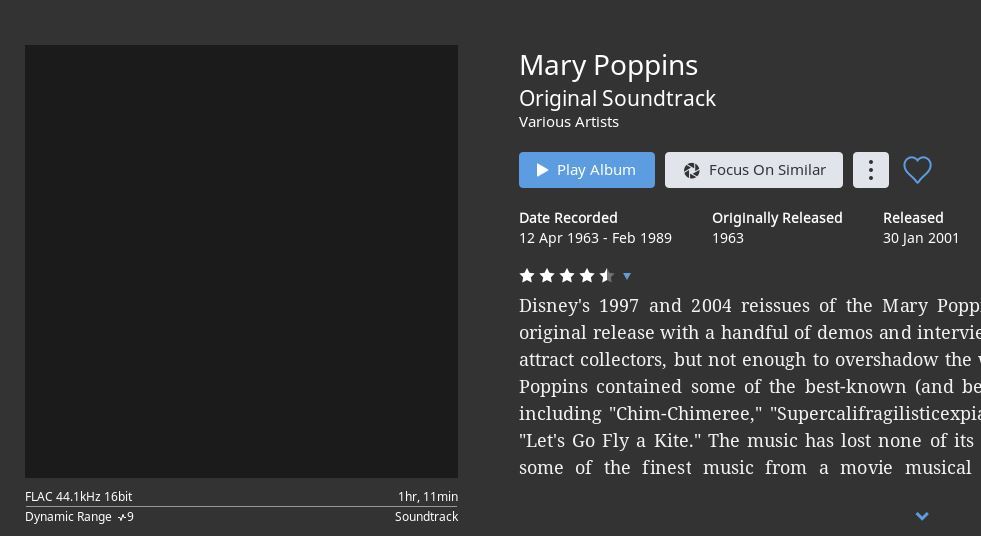 So I have a JPG saved and browse to it. 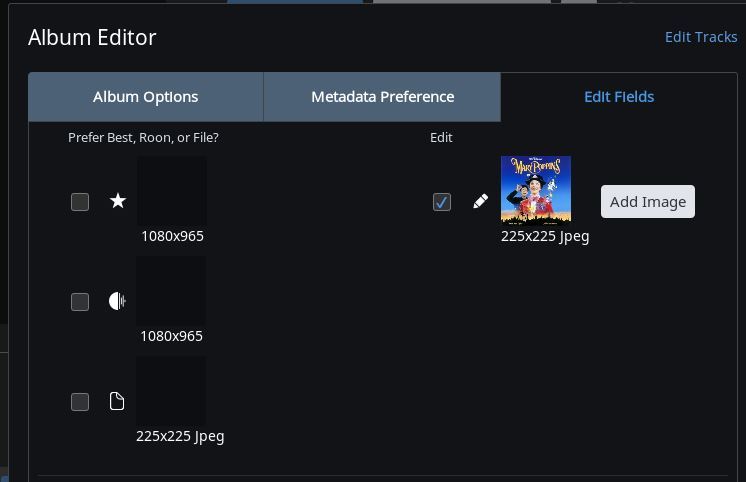 But when I save it, it still shows the blank/black image.

Also, another example is the Guardian of the Galaxy soundtrack. Again, no album art shown and if I edit the metadata, none of the album art lists. 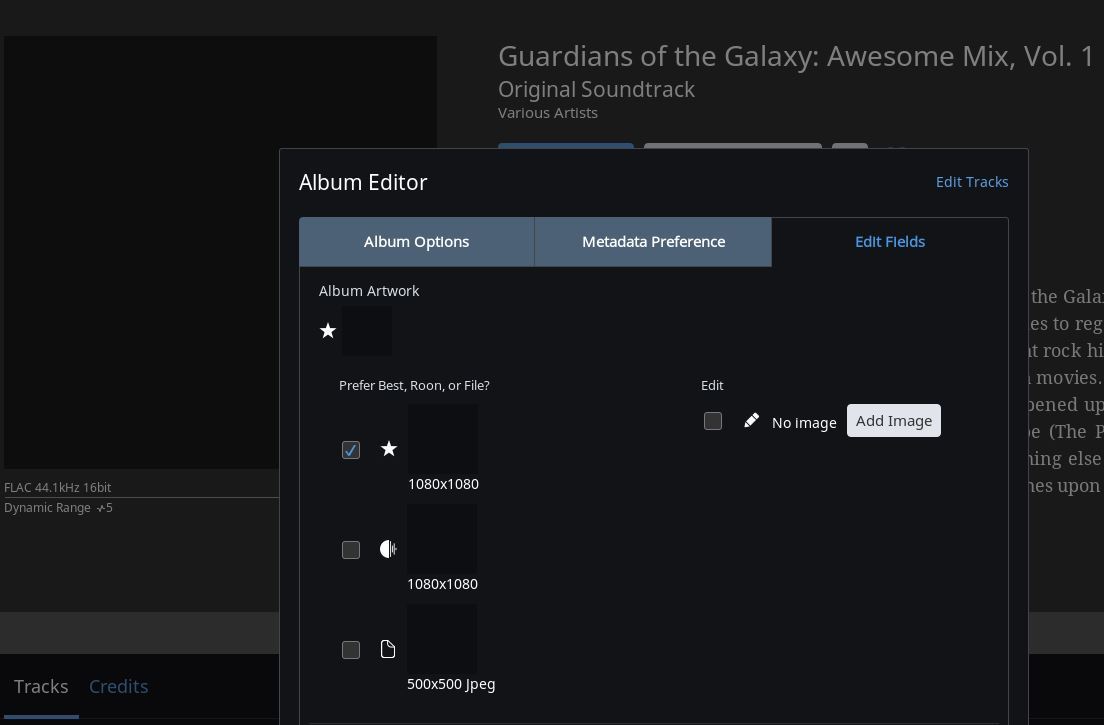 Is there a way to fix this without redoing the whole library? It took a lot of effort to curate this with proper info prior to the images going bad.

Have you tried preferring the Roon versions? Based on what I see when I go to the Tidal versions of these albums, that should work.

You might also try clearing the image cache (Settings > Setup) and restarting.

Tried it but the same results. Black album art. It’s only some albums too. I’ll see if I can download different images and try again.

Hi @Hedwig_Poon1 ----- Thank you for the report and my apologies for the troubles here. Can you please provide some details about your current setup as seen here, so I have a better idea of what gear you’re working with?

Furthermore, besides the update to build 218, can you think of any other changes that may have occurred to your setup (i.e new gear, new applications, OS updates, etc)? I am trying to determine if there are any other variables that could be influencing this behavior.

Sorry to bug again. Seems I just finished asking you one question after another.

Anyway, I got around it but renaming the JPG and retagging the album to it. It’s weird that the ones that didn’t show, if I were to re-download the image overwriting the existing one, it still wouldn’t show. But if I just rename the same “problem” file to another name, it’s now working. The JPGs in question displays properly in Windows Explorer and other image editing apps.

No updates other than Defender defs. Haven’t put Creators Update on as I’m on W10 Enterprise (not released yet). No other updates since (drivers nor patches).

I appreciated you following up and sharing what the “resolve” was here. Let me know if anything else comes up and I will be glad to help. 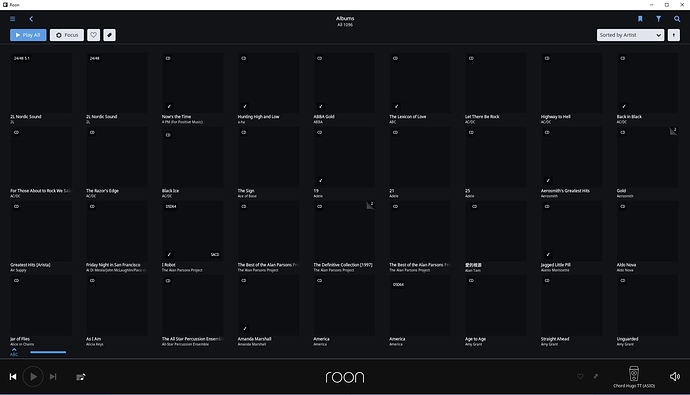 Hi @Hedwig_Poon1 ---- Thank you for touching base, and sorry to hear of the troubles.

Moving forward, could you please use the instructions found here and upload load us a set of logs from the device hosting your Roon core and we’ll have a closer look at what’s going on.

Thanks for getting back. Here are the two logs zipped files (RAATServer Logs folder + Roon Logs folder).

Thanks @Hedwig_Poon1, confirming that your logs have been received. I will let you know what the team comes up with once they’ve completed their analysis. Your patience is very appreciated!

One other thing, I guess Roon keeps trying to update metadata. The issue I have is that I have been curating my library a lot and set all the soundtracks artist to show Original Soundtrack (so this are listed together in album view). Seems Roon has blitzed a few of my edits and changed the album artists. Further, one of the album (Disney’s Princess and the Frog soundtrack) became its Spanish version for a while. I had to manually change it back…of course, no album art (it just spins trying to display it).

For the record, I backed up the library, uninstalled Roon and erase all the folders, and reinstalled the latest download. Still no images. I then tried to restore the backup which got my curation back but still no album art.

Hi @Hedwig_Poon1 ---- Thank you for touching base with me. Your ticket is still in the team’s queue and I am currently waiting for an update on their findings. Once the ticket has been passed back I will be sure to update you immediately.

In the meantime, the team has requested a screenshot highlighting the contents of your database. In the interest of keeping this information private, I am going to be sending you a PM (momentarily) with an example of exactly what they are looking for. 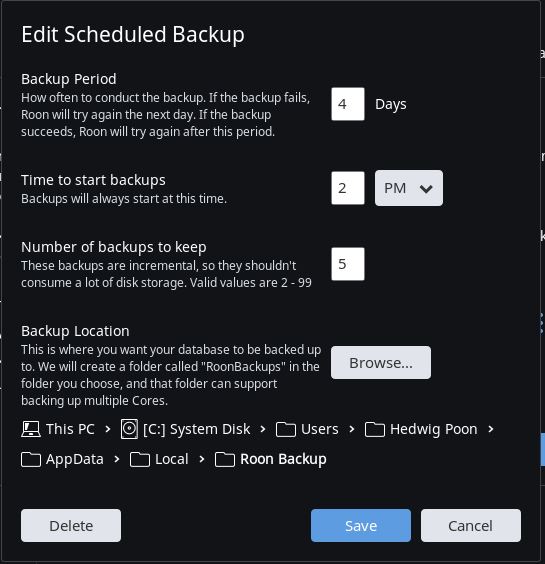 Artwork not showing on OSX
next page →