Albums in Roon seem to be in 2 copies

All albums in ROON seem to be in 2 copies.
For example, when I add an album to my library, and I indicate songs with a « Heart », the album comes back to me without the « Hearts ».
I can’t find any way to make sure I have the version included in my library.
What can I do to always have access to the version that is in my library, and not to the second version that comes I don’t know where when I do a search ?
Why there seem to have always 2 versions of each album in ROON ?

You press the plus button next to play to add the album. Also can select the primary option of the albums and add the priority order they are presented by default in the settings

2nd reading I am not sure that helps with your issue. Sorry.

Thanks Andrew for your answer but unfortunately it doesn’t work.
I’ve been using ROON for over a year and I love it. I just got the lifetime subscription.
I always use the “Plus Button” to add albums to my library. It works if I go to library to find my albums but when the songs arrive, for example, by doing “Start radio”, it’s not the songs from my library that show up, even if they are part of it. So I can’t mark them with a “heart”, nor can I add them to my library since the area to select with the “Plus button” is gray and not accessible to click.
Thanks !

Yeah sorry about that. I misunderstood your issue when I first read it.

Generally, you always have access to the non-library version of an album, even if you have it in your library. This is on purpose:

However, the fact that Roon radio is playing the non-library versions even if you have the track/album in your library is annoying, because it means that you can’t heart the track in the radio because it’s not in your library. This is a known issue:

I would like the radio to choose the library version when there is a choice of different versions: Library, Tidal, Qobuz.

I love Roon Radio, it puts in a great mix of stuff I know and stuff I don’t. However, when it plays tracks that I have in my library, it tends to use a Tidal version that isn’t the actual library version, so I can’t just hit the like button, or sometimes it isn’t the best version. It seems odd to play a song I have in my library but from a different source. I don’t want to just limit to my library, because I still want the new music thrown in. It’s only a minor thing but it is surprising how of…

At least 50% of the tracks I end up listening to comes from roon radio. Consider the following everyday scenario: Roon radio’s doing it’s thing (playing) I hear a track I like… Hey that’s great, and that’s from an album I have in my library I proceed to tag it / fav it … Bummer, I can’t do any of that because Roon radio insists on playing the quobuz version of tracks I have in my library. I can’t think of any good reason why you’d think it’s preferable to play a track you own in your library…

I’m finding Radio is playing more of my own rips these days than it used to. But it plays the same things pretty much every session which is now becoming very tiresome. When it does work it’s great but they seem few and far between these days.

I just read your answer. It is very clear now, I understand why I have always to deal with two versions.
But it would be so useful to can pass easily from one version to the other.
Often I want to mark the piece with a « hearth » but the labyrinth to get there is so complex that I give up. So it would be a great « plus » for me to can do that. Thanks for your so clear answer.

I am glad that it helped. Do you have “Show hidden tracks and albums” set to “No” in Settings > General? If it is “No”, Roon groups the different version of an album under a “Versions” tab on the album page (instead of showing each version separately in the “My Albums” overview): 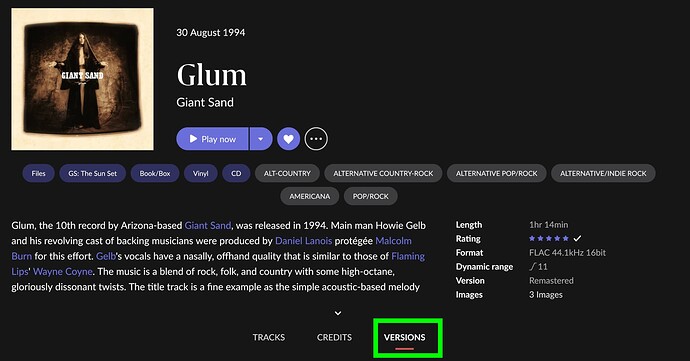 So, if you are in a playlist, you can click the track, which might take you to the non-library version of the album. Then go to “Versions” and to your library version, where you can “heart” the track. It is not ideal and still a lot of clicking, but it might be an improvement.