I am noticing that most (but not all) of the time, when I am playing music on the Roon ARC app through Bluetooth in my car, the track/artist metadata on the car’s display matches the track being played, but the album art corresponds to the previous track that was played (see picture). This problem persists as playback advances from one track to the next: the album art remains one track behind.

I have not seen this happen with other media apps (e.g. Spotify) in the same car, so I’m wondering if this is caused by a bug in Roon ARC. 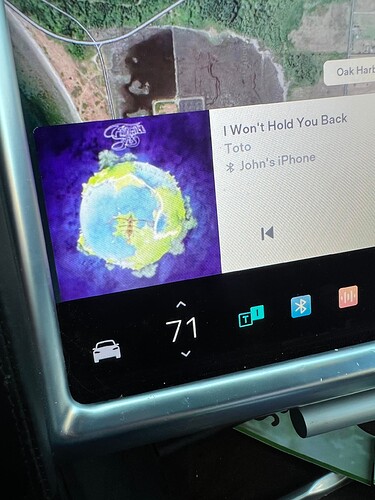 There is no in car app or integration for Roon ARC.

I am not trying to use (nor am I asking for) an in-car app.

But there is a standard for communicating metadata to a Bluetooth device (such as a car). And the Roon ARC app is clearly attempting to use this standard, because playback metadata is appearing on the car’s display. The artist and track names are correctly displayed, but the album art is not. I am asking whether this could be a bug in the Roon ARC app itself that the Roon developers might want to investigate.

Perhaps it’s a Tesla bug, but that seems unlikely since other apps (e.g. Spotify) don’t exhibit this problem.

I don’t know. Where does Roon talk about bluetooth? Roon ARC sends music to your phone speakers or an attached USB DAC and/or headphones.

Roon ARC sends music to your phone speakers or an attached USB DAC and/or headphones.

…or to any device that’s available to iOS as an audio playback device.

Where does Roon talk about bluetooth?

Here’s where: In this screenshot of Roon ARC’s “now playing” screen, note the icon at the bottom center: the triangle and concentric circles. Tap on it, and you can see the available devices. In this case, since my phone is linked via Bluetooth to my car, the car is listed as an available device.

Perhaps, but does bluetooth also imply video in addition to audio? IDK. I’m hoping for a CarPlay app soon, but in the meantime, just living with the limitations since there is no CarPlay app for Roon ARC. I can also use 3.5mm auxiliary, but it is pretty sketchy in my car.

I play Arc via Bluetooth in my car all the time with zero problems or lag.
However it is an Android phone so not really apples for apples.
But this is the first report I have read so far.

not really apples for apples.

I see what you did there.

The same thing happens with my Tesla Model 3 and iOS. I haven’t been able to work out which of the car, phone, ARC is causing the problem though.

I think this is a Tesla problem. (I found this thread because it’s happening to me in my Tesla)

@SpicyMusic are these Tidal tracks by chance? Some Tidal users are experiencing this even when using the Tidal app. See this thread where I included links to a couple of Tidal subreddit posts from earlier today.

@Mark_Johnston, I saw this recent post in the Tidal subreddit. Looks like this is a Tidal issue although they are apparently denying it.

I prefer Qobuz but I can’t say with certainty that Tidal wasn’t in the mix.

I get the same 1 track cover art lag with my Pixel 7 pro running android 13. This is the cover art that shows up in the pull down notification shade. If I skip forward then go back - the cover art is aligned with the track playing. But then if I let it play through to the next track - the meta displays correctly but the cover art doesn’t change.

Roon ARC works beautifully, finally I can access my library in my car without jumping through multiple flaming hoops. However, when playing back music, the cover art doesn’t update. It only displays the cover art of the first song played, as you can see in the image below. [IMG_4926] I was pleasantly surprised it showed the cover art at all (!), but now that it does I want it to show the correct one haha. Roon 2.0 (1128) Tesla 2022.28.1 iOS 16.0

I have the same lag on my lockscreen display (Google Pixel 6).