Bluesound Vault 2i to Minis: Who configures the signal path?

Just wondering how this configuration works with Roon: Our Bluesound Vault 2i is feeding a wireless stereo pair of Bluesound Mini 2i speakers. We were previously managing this system with BluOS software, but recently upgraded to Roon, whose core is running on a high-end Windows 10 laptop. The result is much more reliable wireless network connectivity, as well as a superior library management interface.

But Roon also allows us to see for the first time how our signal path is being configured (see below), and this raised a couple of questions that we’re hoping someone here can answer. 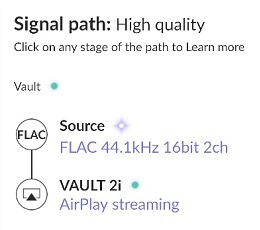 As you can see, the source is a 16/441kHz FLAC file stored on the Vault. But Roon says that our signal path is “high quality,” which I take to mean that the system is using lossy compression, and that the Vault is using the Apple Airplay protocol to stream audio data over the wireless network. To me this seemed sub-optimal, since Bluesound says the Vault can use a lossless protocol to stream to the speakers.

So which component configures the signal path in this system? Is it Roon, and if so, is it possible to tell Roon to choose a lossless protocol? Or is it the Bluesound components?

I raised these questions with Bluesound tech support. They said they were unfamiliar with the internals of Roon, could not account for Roon’s Signal Path display, and suggested I ask on this forum instead. Any insight?

Well, there are pieces of the puzzle missing here, but one thing to do is:
Go to Settings in Roon, Disable The Vault (Airplay) and rather Enable the Vault under Roon Ready-section of devices.

It’s rarely a good idea to use the very same device as both storage and output device though, the network traffic load doubles as your Roon Core will need to fetch the media from the Vault and then send it back to the same device simultaneously (at least partly).
You should consider to hard wire the Vault and Roon Core for best stability and experience.

I agree with Mikael. Airplay should be the option of last resort, it is limited to 16bit/48kHz.

If the WiFi signal is reliable enough, lossless streaming to Bluesound speakers provides much better sound quality. Additionally DSP settings in Roon can upsample the audio stream for improved sound.

My Roon Core is connected via ethernet cable to my router, some of my Bluesound devices are hardwired as well but 5 are not. In your case, the Core and the Vault should both be connected to your router via cable.

Here is the signal path to one Pulse speaker. 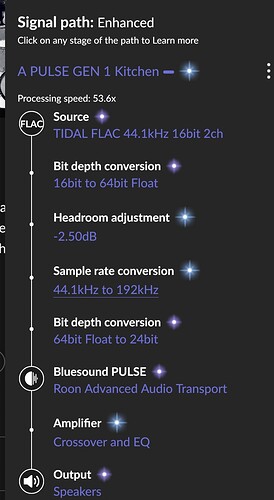 Thanks Mikael,
I hadn’t thought to check the audio settings.

When I did, however, I found Roon is not recognizing the Vault 2i as Roon Ready. (See below.)

I thought perhaps we might be missing a firmware update, so we had BluOS update the firmware and the BluOS software, then rebooted the Vault 2i and restarted Roon, but nothing changed. Roon still does not report the Vault as Roon Ready.

Sorry Leonard, i’m at a loss here…
All of your Bluesound devices should emerge under Roon Ready devices in audio settings?
Well. maybe the stereo pair would surface as one unit, but still the Vault is also Roon Ready and should be visible.
Perhaps someone else is using a similar setup and can suggest measures?

I’ve read elsewhere in this forum about device databases becoming corrupted in Roon and preventing some devices from being seen. The device database is not deleted when Roon is re-installed and must be done manually. I haven’t had the unfortunate experience but others have.

Core Machine (Operating system/System info/Roon build number) NUC 7 IMAC controller QNAP NAS is where my music is stored. Network Details (Including networking gear model/manufacturer and if on WiFi/Ethernet) Eero Router. Everything connected via Ethernet. Audio Devices (Specify what device you’re using and its connection type - USB/HDMI/etc.) Bang & Olufsen A9 connected via ethernet cable Description Of Issue Came home and Roon was open on my Mac. I put Mac to sleep for a few minutes.…

Thanks Mikael and BC, we’ve now solved the problem.

Turns out this was a network configuration issue. The network router got its first look at the Vault months before we installed Roon, and for some reason it did not initially see/remember the Vault’s “Roon Ready” attributes. Perhaps Roon itself causes the Vault to expose its Roon Ready attribute when the software initializes. In any case, once we power-cycled the router (and, for good measure, the Vault) and then restarted Roon, it for the first time saw the Vault as a Roon Ready device. And, just as you suggested, once it saw the Vault as Roon Ready it enabled RAAT and the signal path became lossless!

Which raises the question: Why don’t the standard installation instructions for Roon simply prescribe rebooting the router (at the optimal time)? I’ve found that the online documentation for resolving network issues does suggest that one begin troubleshooting by rebooting everything including the router, but to find that piece of advice you first have to suspect a network issue. Which of us Roon-novices understands the system well enough on first acquaintance to grasp the full extent of Roon’s dependency on the state of the router?

Which of us Roon-novices understands the system well enough on first acquaintance to grasp the full extent of Roon’s dependency on the state of the router?

You’re a novice no longer!