Bug: menus are cut off in 1.8 (still in 763), hiding content and requiring scrolling in menu

[As this poor little report may have been overlooked in the Software room where I created it, I hope it is OK to move it here for the consideration of @support]

Note: The track menu is just one example, similarly cut-off menus occur in other places, too

→ EXPECTED RESULT
The menu box is large enough to let you see all menu entries.
(If the menu was really too large to fit the screen, which it is not, then the menu should give UI feedback that it is scrollable)

→ ACTUAL RESULT
The menu is cut off in a seemingly arbitrary place.
There is no scroll indicator telling you that some of the menu content is invisible.
The menu cutoff can fall between 2 menu entries, which perfectly hides the existence of invisible entries.

Screenshot from Windows desktop version follows, the menu here is cut off below “View lyrics …” in such a way that the following “Edit …” entry is barely visible.

Naim NDX2 via Ethernet (Cat 6a) to Rock

Thanks so much for reporting this in such detail! I’m sorry it took us this long to get back to you.

Are you still experiencing the same behavior with the latest build (764)?

Happy to help out, thanks for picking it up. Yep, same thing. Another example from many (this is everywhere), when I open the artist menu on the Windows version I barely see that there is an Edit entry: 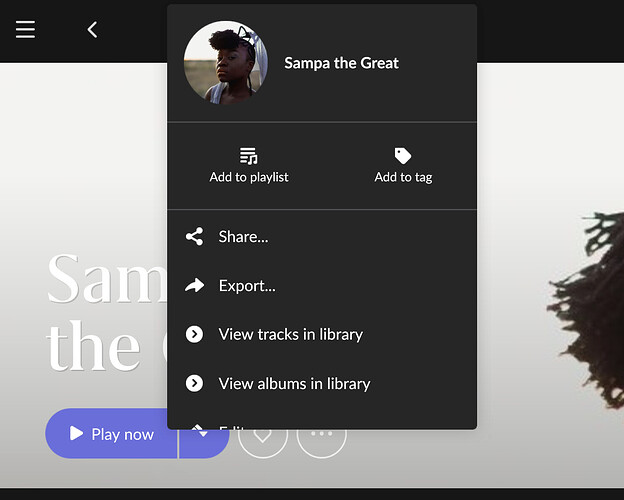 In this case, this does not occur on the 10" Android tablet, but other cut-off menus do (such as the mentioned track menus)

I also don’t understand why Edit is the last entry. Surely edit is a more frequent action than Export