It appears that my Cambridge Audio 851N is no longer displaying the audio file information like DSD, 48kHz 24Bit, 96kHz 24bit anymore. This works when playing the same files in JRiver but not Roon.

Hi Chris,
How are you connecting to the 851N ?
What does the 851N display show when using Roon ?
Could be worth checking if Cambridge have released a driver or firmware update for the 851N.

The 851N is connected to my network via wireless and playing back device for a UPnP server.

When I select the 851N from Jriver Media player, then I get the proper information. 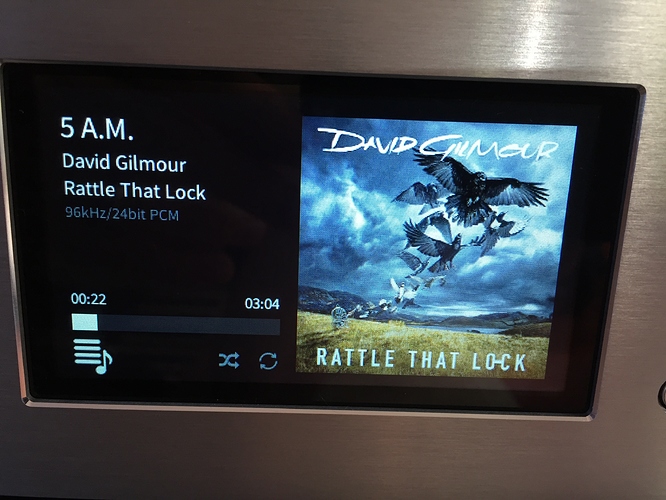 But when I play back via Roon it does not work. I believe that Roon thinks this the 851N is an Airplay device and treating it as such instead of a UPnP playback device. Not sure if this is a Roon issue or a 851N issues or where I might configure Roon not to consider the 851N a Airplay device. 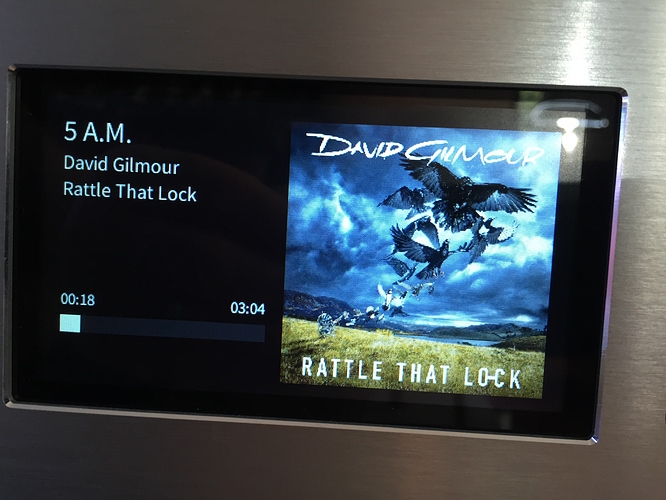 Here is how Roon recognizes the 851N as an AirPlay device. 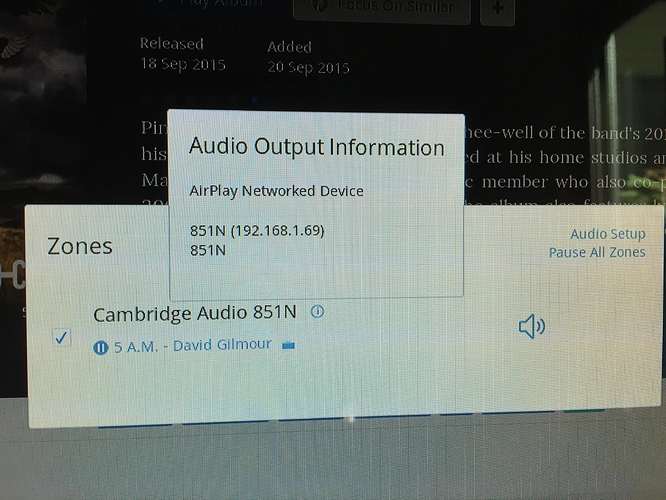 As you’ve seen, Roon is connecting to the 851N via Airplay. Airplay is limited in resolution (OS X downsamples to 44.1/16 when streaming with Airplay, except the Apple TV which is 48k). It seems likely that the 851N doesn’t display file resolution when rendering from Airplay (maybe try playing from a phone to check this).

Roon doesn’t support UPnP and it seems unlikely it will (see this thread for explanation):

Another review of a streaming end point, from Bel Canto. @Danny, you expressed contempt for uPnP. Care to discuss this further? Because there are lots of these devices, and it is attractive not to have to put a computer everywhere…

The good news is that RoonSpeakers is intended to connect to most streamer endpoints as network zones. I’m hanging out for it too (Auralic Aries). Until then I’m connecting direct to the DAC with USB to play hi res and DSD.

I found Airplay quite laggy into the Aries. How is it with the 851N ?

Thanks for the feedback. I will have to go back to USB playback. The Roon Speakers option sounds interesting.

The Airplay is not too bad on the 851N. I have not noticed a major difference between other playback methods. The nice thing is it does not have the clicking noise my Luxman DA-06 has when switching between sample rates.

Clicking between sample rates might be fixed by adding a short (ms) delay in the zone configuration options.

Actually it is the Luxman’s relays that switch when the frequency changes. It is known issue or design distraction

I have hooked up with USB and the 851N is working as designed. The only disappointment now is the nice pictures no longer displaying

In references to Roon Speakers or Roon Certified. Do you think this will be a backwards compatible technology or only available on future released products?

My understanding is drawn from these threads:

RAAT [was Roon Speakers] - What , When, How and for Whom? Roon Software

It goes to show how many different things are being discussed when nobody has questioned the whole RAAT [was RoonSpeakers] concept! Would anyone care to elaborate (or speculate) ?! Cheers

To clarify some confusion on Private Zones: Zones are composed of 1 or more endpoints (multi-endpoint zones are what we called grouped zones, so you can play the same thing in two locations or more). We only support grouped (or some people called it “linked zones”) with kind types… so for example, Meridian zones can link to Meridian zones, and Airplay with Airplay. USB zones can not be currently linked, but it is on our roadmap. A Roon Remote exposes its own outputs as zones, but the idea is t…

NOTE: this post has been replaced by the more updated page at https://kb.roonlabs.com/Roon_partner_programs Some of you may have noticed that a few audio products out here do some special in-app stuff when you hook them up to Roon. This is mostly in signal path and the footer, but we will do more and more “special” things with these devices. We call this hardware manufacturer program “Roon Tested”. We need to have a working relationship with the manufacturer to make this happen. The idea is …

After reading them again, my understanding is that RoonSpeakers will need to be implemented by a manufacturer in the particular device, usually by a firmware upgrade or similar. Mr. Wang of Auralic told me that he expects it will take two months from when they receive code to do that for the Aries.

The limitations on backwards compatibility would seem to be hardware requirements, capacity to upgrade firmware/software and implementation of that upgrade.

Does the 851N have upgradable firmware ?

The 851N indeed does have upgradable firmware if the are on the list of manufacturers.

How do you like the Aries? I have the 851N in my main system right now until I get my new Luxman preamp, then the Luxman DA-06 will become my main playback device. I have to decide if I will stick with my Mac Mini via USB to the DA-06 or try something else like a Aries.

The Aries sounds great, particularly through the AES connection to the Vega, but I have had connection issues with it using the Lightning DS app. Sometimes I have to restart the Aries so it can find it, even using a static IP for the Aries. This does seem to be reducing as firmware upgrades are made though. The other day I left it playing the radio and was pleased to find it still doing so hours later (burning in some new tubes).

I used to have some delay in Roon recognising it as an Airplay device, but this also has improved. Whether due to improvements by Auralic or Roon or both I can’t say. I have had a few instances where Roon loses the Aries via Airplay, but not as many as with Lightning DS.

At one stage I tried a USB connected SSD off my Asus router as a storage device and there was an SMB incompatibility issue which I understand has now been fixed in firmware. Instead of waiting for the fix I stuck the SSD in a Brix and haven’t looked back.

The only other problem I’ve had is that the connections at the back can be hard to access for someone without delicate fingers !

Because they are both committed to continual improvements I am confident Auralic and Roon will iron out all the problems, but I wouldn’t “sell” the combination as suitable for someone who had no technical knowledge and just wanted it to work without issues (eg. non-hobbyist female friends) just yet.