Can you set Roon to playback in mono

Although Brian probably has a better idea than anyone else, the reality is that not even the devs know when 1.3 will be released. That is because the testing program for major releases is iterative. If something isn’t working properly in the new version it is fixed or redesigned and then tested again. This ensures that so far as possible, users get fully functional, polished software.

Roon publish bugfix releases and their frequency drops off before a major release is published. That has occurred so we know that 1.3 is impending, but there is no artificial public deadline.

I am using hifiberry w/ roon and I would like to output mono since I only have one speaker in the zone connected, is this possible?

1.3 is here, and I see the mono function was not included in the update. Although the crossfeed does help out a bit, it doesn’t really do the trick with more or less all Blue Note Records albums from the fifties and sixties where hard panned stereo is just painful to listen to on headphones over a longer period of time…even with crossfeed activated.

A similar feature in Roon would really be helpful.

We didn’t make a mono button, but we did include a matrix mixer in the Procedural EQ using the “Mix” feature. It’s totally possible to mix both channels down to mono if you want: 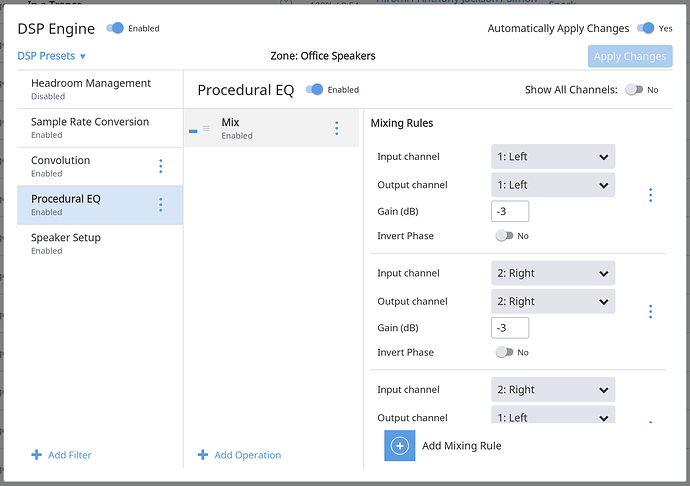 Pay attention to Headroom Management. If you’re clipping, either make more headroom, or make those -3’s a little bit more negative. You shouldn’t have to go below -6, but it’s nicer to attenuate less when possible.

7 Likes
Force zone to mono
Ability To Convert Stereo To Mono For A Device
An easy way to switch any zone to mono playback from a Roon Remote
Can you get Roon to merge the stereo channels into mono?
DietPi + Roonbridge do not appear in audio settings
Active speaker similar to Sonos Play:5 for RoPieee setup
Sound quality of wireless chromecast from Qobuz vs ethernet through Roon
Unexpected failure communicating with audio device
EQ settings for single point speakers
Managing Classical Music Library
Roon 1.3 DSP Questions
Changeling (Gustav Lindqvist) February 3, 2017, 8:59pm #12

Ah! I’ll check it out immediately and report back.
Thanks for quick and great advice, appreciate the effort.[quote=“brian, post:11, topic:17507, full:true”]
We didn’t make a mono button, but we did include a matrix mixer in the Procedural EQ using the “Mix” feature. It’s totally possible to mix both channels down to mono if you want:

Pay attention to Headroom Management. If you’re clipping, either make more headroom, or make those -3’s a little bit more negative. You shouldn’t have to go below -6, but it’s nicer to attenuate less when possible.
[/quote]

Just a quick test done and it seems to work well!
I’ll do proper testing tomorrow.
Now if there was only a way to toggle this setting on/off. For any other album than hard panned stereo recordings this “mono” mix down sounds awful…

I don’t think there’s an easy toggle, but you can change DSP Presets – saving a bit of handiwork while switching.

How do you do this if you listen with headphones?

Headphones may be over eyes. Four posts up.

On Meridian Mono is a preset you can use.

I’m considering running a single studio monitor in my kitchen, rather than a pair of cheaper ones. Would your experience of the mono output here incline you to think that the mono would sound bad on some / many albums?

I’m under the impression that not much music these days is panned to a great degree, and so much of it would fall under the “For any other album than hard panned stereo recordings this “mono” mix down sounds awful…” caveat?

Good question, I wouldn’t know sorry.
I’d say that the majority of what I’m listening to (jazz from the fifties and sixties) falls under this category.
What I can say is that the mono mixdown sounds awful on more modern albums.

At the moment I’m evaluating Waves NX (Virtual mix room) to bring the perceived positioning of stereo monitors closer together, but not all the way to mono, on my headphones. By doing so I feel I’m saving my ears from a lot of fatigue caused by hard panned stereo. It works MUCH better than any crossfeed I’ve ever heard. Some recordings fall flat and die from a mono mixdown and this has proven to be a very good solution for me, AND it doesn’t require me to change setting for more modern recordings. Money well spent!

But it doesn’t work with Roon. I’m using a wrapper to get the NX plugin to work with jRiver. I’d love to see a similar function in Roon some day…

Not sure if this was at all helpful.

Sounds like I should get a pair of speakers then

With regards to architectural audio, many times it is desirable to have mono. The idea of “stereo” from in-ceiling speakers is fairly silly. Throughout a home, listeners aren’t going to be sitting in the one lone stereo “sweet spot”. Plus in many rooms, an odd number of speakers is advantageous.

Same holds true for outside speakers.

I’ll be using this more extensively to see if there are any disadvantages.

Yes, thanks for including that tip, Tony

I had noticed that with settings of -3, the overall subjective volume still went up when the mix was engaged. Setting the levels to -4dB created a mix that seems to show no overall change in volume between on/off (to my ears at least).

After a little more casual listening, I still really like this implementation. In my experience, creating a mono signal with the use of simple resistors (as most “architectural” amps with mono switches do) creates quite a SQ hit that I’m not hearing by summing channels in the digital domain.

Question: Within Roon, if I throw the switch to display the clipping indicator, will it still turn on without engaging Headroom Management overall?

Just set headroom to 0dB and the level should stay the same with the clipping indicator engaged ( from memory, not in front of Roon at the moment).

Regarding -3 dB to level the volume, this is tricky. Adding two sounds should add 3 dB of level (because dB is logarithmic, and log of 2 is 0.3, and the deciBel is to a Bel like a decimeter is to a meter). But this is true if the sounds are uncorrelated, like a piano in one channel and drums in the other. If you have two channels with the same signal, like a mono recording, the signals line up and the voltages add up and double, and the audible volume depends on the power and the power is the square of the voltage, so that is a factor of four, which is 6 dB. So in practice, with somewhat correlated, somewhat uncorrelated sounds in the channels, 4 or 5 dB is right, but for a mono recording you want to drop 6 dB.