Display not Syncing with Tracks being Played

Artist and album art are not syncing to a chromecast connected Samsung TV display. This is especially noticeable with playlists, for example daily mixes. It happens with all 3 audio systems I mention above.

It is patchy, so for periods the syncing will work. Then the artist art may display with a significant delay, for example the correct artist art will only appear 2/3rds through a song whilst the previous artist confusingly continues to display. Also the album art will periodically be replaced by a generic “stock album disk”.

The syncing is fixed by briefly turning on and off the display icon whilst the music is playing which seems to allow the syncing to “catch up”. But the display will eventually fall out of sync again.

There are some potentially nice features in build 831 but this display syncing issue is annoying. I personally have got some very welcome stability with my NAA/SOtM system since the new release although I didn’t see anything in the release notes that would account for that. Maybe there has been work in the background or maybe it is a coincidence and something else has also been updated like Windows or my ISP’s router.

Thanks for getting in touch about this. We’re sorry to hear that you’ve had some artwork sync issues on your display following the update.

Let’s have you start by doing a full hard reboot of your Roon Core and Router. Power down, unplug your Core and Router, wait a couple minutes, reconnect power and restart. Then check to see if the issue persists.

Please let us know if this resolves the issue, if not we’ll continue to troubleshoot. We apologize for the inconvenience and the delay that it may cause in exploring all the new features in our latest update. We’ll get this cleared up for you as quickly as we can.

Thanks for getting in touch about this. We’re sorry to hear that you’ve had some artwork sync issues on your display following the update.

the approach you mentioned helps temporarily, but for the large libraries we continue to wait patiently for even better performance. I’m sure the team has more ideas for improvement, but as always, test well, and then get it out in the package every 3 to 6 months

Thanks for taking a look. I have re-booted everything.

I then loaded up the Wilko daily mix below (nice mix by the way, although some may prefer more artist variety, I liked it).

The very first Wilko artist image “stuck” until 1.40 min into the next Kurt Vile track. I have been playing for an hour and a half or so and so far all subsequent artist and album art has synced with track changes normally. As I say, I find that the breakdown in the synchronisation builds up with time. A complete hard reboot has definitely helped. So I guess I just need to use roon as I normally use it to see if the synchronization problem returns. I don’t know what it is I do that causes this. It could be anything. For example, I do like to change the queue, “adding next” recommendations that pop up on community threads or roon recommendations, or magazines or internet radio or even entire playlists. It is easily reproducable in the sense that it is only really noticeable with playlists or a varied queue (you will probably not notice with an album). But I don’t know if it is something to do with my system setup or my pattern of roon usage. 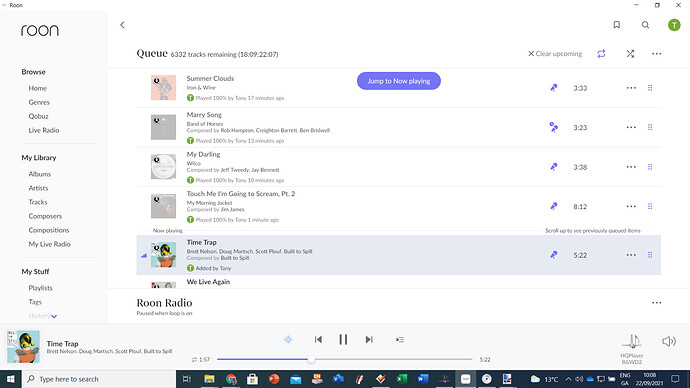 Well, as is the pattern, 4 hours after my previous post the synchronization starts to break down. This time I queued a “Camille” daily mix. Camille sings in both French and English but it was still a surprise to see Madonna singing “American Life” on this mix when most of the tracks are French Pop. The connection seems to have been the French Dance composer Mirwais gets a composer credit. Doesn’t really fit the vibe of the rest of the mix but that is another story. Starting with the transition from the Madonna song to the Karen Ann song the synchronization starts to break down. On average the correct artwork is delayed 1.30 to 1.50 mins. This is not an absolute rule. If there are lyrics then roon scrolling the lyrics on the display seems to “force” artwork synchronization. (Edit: But not always. I am looking now at an example of Eddy de Pretto singing “Mamere” from the same daily mix where the album art and lyrics are synced but it took 1.30 secs for the artist art to catch up so the synchronization effects must be more complicated).

Thank you for following up with me on this.

I actually experienced something similar a few months ago. After taking a short walk to think about what, if any, changes I had made to my system I remembered having updated the firmware on my router. When I checked my DNS settings I discovered they had reverted to ISP settings. I had previously set them to Cloudflare upon @noris’ suggestion. Once I changed them back to Cloudflare the album art lag issue disappeared.

Can you check your DNS server settings on your router and consider upgrading to Cloudflare DNS, Quad9 or Google DNS if you haven’t done so already?

You may need to do a Google search for instructions on how to do this for your specific router model. Thankfully, it’s usually a fairly simple task.

If this doesn’t help we’ll continue to troubleshoot.

Ok. For some reason I have 1.1.1.1 as the secondary DNS and the ISP as the primary DNS, so I have swapped them and rebooted. It usually takes a while for the syncing problem to occur so I will report back later.

I had to deal with something else so I wasn’t able to test straight away. Unfortunately changing the ISP DNS to Cloudflare causes almost immediate dropouts. The dropouts disappear when I revert to the ISP DNS.

Any other suggestions? I don’t know if it is relevant but our ISP’s router is in bridged mode so that we have more control over the internal LAN with our own router (Netgear AX1800). TBH I remember this syncing problem was there also when connected directly to the ISP. I was having a lot of audio dropouts (hence the new router) and did not raise the issue then because I was much more concerned with fixing the audio stability.

BTW I am not the first or only person to report this:

Core is Nucleus+, Music resides on a QNAP NAS, remotes are iPads and an iPhone, 5 Displays on TVs using Google Chromecast Dongles About 30-40% of the time, when a song ends and another begins, the Artist picture does not change. It sometimes finally changes in the middle of the next song and sometimes not till the following song. Much less often, the cover art does not change. I have also seen several instances where the cover art changes to the correct art and in the middle of a song, it disap…

Hi @tripleCrotchet, I’d like to enable diagnostics for an example of this. What I’m hoping is you can record a short video the next time this happens so we can see what you’re seeing in action. Let us know the time this occurred as well and we’ll run diagnostics to get a better idea of what was occurring during the time frame in the video. Thanks!

What I’m hoping is you can record a short video

I have no idea how to do this. I thought the screen shots were self explanatory.

I think he was thinking of a simple an short cell phone video. Standing in front of the screen.

I am a bit bewildered here. I don’t know how myself or other posters could be clearer. Maybe an example of a 2 song queue will help.

The most common use case is:

. We appreciate your willingness to describe what is going on and share examples.

As Dylan has said, getting the timestamp (local date and time) when this issue occurs next will allow us to take a deep dive into the errors that might be causing the interruption of synchronization.

Could you please let us know when this issue occurs the next time?