@brian I have played around with ripped/extracted DSF files and downloaded DSF files.

The downloaded DSF no longer have issues with pop, clicks, between, or at the end of tracks.

Ripped DSF files are hit and miss. Some have loud POP, some have none. I am going to try out some other extractors to see if they fix the issue.

POP playing first file after system start: Once I changed delay to 500ms, this went away for DSF or FLAC - thanks for the info.

Core weirdness: After testing with connection to DAC, I removed the Core, but I did not DISABLE the ASIO driver. When I tried to startup Core (no DAC attached) the screen with the Roon Symbol pulsating away was shown but never clearing and displaying the main screen. Rebooted, shutdown optimizers, etc. etc but no go - same issue - Roon symbol just pulsating. Hooked up Core with no internet, and then Roon finally loaded up to main screen. I disabled the driver, hooked Roon back up to network, started Roon, and all was okay.

Ok, wacky. @mike can you help @dshore send us some logs? I’d love to see what happened during this last run or two with the core.

So far with the Core attached to endpoint (DAC) it is working well with DSD and ASIO. No white screens, no lockups, no lost settings (you said this is fixed).

Found albums which were originally DFF, then converted to DSF (at some point in time) are the worse. I am using a new converter (I have all my music archived) and the conversion has no noise at end of song.

Will test again once Remote issues resolved - hopefully next release.

I have a Teac UD-501 with Windows 8.1 core and Teac asio driver. DSD playback is fine with DoP method on all materials, so far. I do however, get pops when playing DSD native mode and switching to a PCM track or vice versa. Native between all DSD tracks is fine. I briefly played with delays of 500ms and 1000ms but this seemed to have no effect.

POP playing first file after system start: Once I changed delay to 500ms, this went away for DSF or FLAC - thanks for the info.

I think we are still slightly mishandling silence during resync delays when transitioning from PCM->DSD. I think many DACs are civilized enough to handle this gracefully (yours seems to fall in that category). The next build has some improvements in this area anyways. You might be able to get away without a resync delay entirely in that build.

Core weirdness: After testing with connection to DAC, I removed the Core, but I did not DISABLE the ASIO driver. When I tried to startup Core (no DAC attached) the screen with the Roon Symbol pulsating away was shown but never clearing and displaying the main screen. Rebooted, shutdown optimizers, etc. etc but no go - same issue - Roon symbol just pulsating. Hooked up Core with no internet, and then Roon finally loaded up to main screen. I disabled the driver, hooked Roon back up to network, started Roon, and all was okay.

From your description, it makes it sound like one of the places where we call into your driver is hanging and locking us up, but your logs don’t seem to depict you getting stuck at a spinner. Each of the 9 log files in your support package contains an instance of successful ASIO playback. Any ideas as to what might have happened here?

[quote=“brian, post:25, topic:1620”]
From your description, it makes it sound like one of the places where we call into your driver is hanging and locking us up, but your logs don’t seem to depict you getting stuck at a spinner. Each of the 9 log files in your support package contains an instance of successful ASIO playback. Any ideas as to what might have happened here?[/quote]
I was running the Core hooked up to Endpoint testing issues with Remote hooked up to Endpoint. I had the ASIO driver enabled on the Core. I shutdown Core, disconnected Endpoint, started up Core, and saw the pulsating logo. Rebooted a couple times, same thing. Hooked up Endpoint to Core, Disabled ASIO Driver, shutdown, removed Endpoint, started up, and no issues. This is the only time I have seen this, but I have not tried to duplicate it.

So far Core hooked up to Endpoint playing DSD is doing well. Will be interested in next release getting Core and Remote back in the equation.

I have a similar but possibly separate issue. I have a PS Audio PerfectWave II DAC connected to a Parasound Halo AC21 Amp. I have a Mac Mini connected directly to the DAC via USB, running Roon, which I use in client/server mode (the Mac Mini is the server, my Mac laptop is the client that I use to choose the music). The DAC is set to run at “native” sample rate. When using Roon, if I manually switch between songs (i.e., I start playing a song, find a new song, then start playing it instead), there is a “click” noise that comes from my DAC. If I change the sample rate to “nativeX” there is both a “click” and a short moment of static from the speakers. After that the song starts and sounds great. None of this occurs if I play an album and simply allow the songs to progress normally from one to the next. If it matters, I generally operate in Core Audio Exclusive Mode, although switching to other modes does not change this phenomenon. I also check the “Use Integer Mode If Supported” box but, again, unchecking it does not fix this issue. This is a PCM DAC (no DSD).

When I perform the same tests on the same setup in Tidal or iTunes, there is no clicking noise. I can literally start a song in Tidal, switch to a new song, and not hear the click, whereas if I do exactly the same test in Roon, with the same songs, I hear a click. Any thoughts on how to make the noise go away? I doubt it’s the case but I’m afraid I’m damaging something.

PS - I love the Roon product and am so grateful for all the thought and effort you’ve put into creating it and supporting it. Thank you so much for creating this excellent and excellent sounding mechanism for managing music and remotely controlling music servers.

Thanks for the report, and the kind words @batmanunderoos!

I believe we have a PerfectWave II in our test lab, so we’ll take a look and see if we can reproduce this.

In the mean time, I’d like to know a little more about how you have the audio output configured. Can you take a look at the Audio tab in Settings and let us know your DACs settings under the little gears? Or maybe post a screenshot of what you’re seeing, like this:

Thanks for the reply! I’ll take a screenshot when I’m home tonight, but I can tell you it looks exactly like what you are showing, except the “Use Integer Mode if Supported” is checked.

Hi,
I also get these cracks/pops during track change. But not with all DSD albums.

Here are my settings: 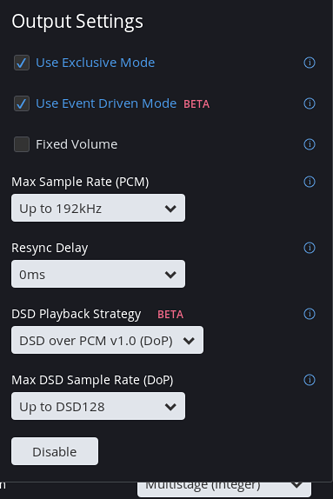 Hi @freelancr – can you confirm you’re not hearing these clicks when using another player?

We’ve seen this come up a few times with certain files, so just want to make sure there’s not something unique to this media before we take a deeper look.

Hi - I am also having problems with DSD playback through dCS Vivaldi. I am running core on a MBP with output via USB to Vivaldi. All my DSD catalogue is in DoP format. I am using the dCS Upsampler Audio Device rather than the system output with the following settings:

I have been listened to “Roon Radio”, which keeps flipping between 16/44, 24/96, 24/192, DoP tracks etc. When it gets to a DoP track the dCS unit shows 24/176 (it usually shows "DSD for a DoP track) and the sound is a persistent click. The sound bar equalizer on Roon is flat, as if there is no output. The problem only exists on DoP tracks, which sound fine when streamed to the upsampler via the ethernet input (using Twonky). Any thoughts on what I am doing wrong?

@mike: yes I can confirm that. I don’t hear these clicks with Jriver.

I’d like to try this out with the same files you guys are using, so we can try to reproduce. Can you upload a song or two that you’re hearing clicks on to somewhere like Dropbox, then send me a PM with the link?

If you can’t upload them somewhere, just let me know and I’ll give you access to our file uploader. Thanks!

Ok – @freelancr sent me some media and I can reproduce this, guys. We’re looking into it.

@freelancr, I reviewed your files today.

This one was tricky. The way the DSF file format specification is written (to my eyes), these files actually do have clicks in the audio.

When played through Roon, some DACs that I have here seem to filter them out, and some play them. Our DSD->PCM conversion plays them. This error wouldn’t be hard to filter for someone who was looking out for this sort of problem–the “clicks” manifest as 0000000000000 data in one of the channels at the very end of the track. Strings of 0’s like that are practically non-existent in legitimate DSD data.

I found one DAC that appears to filter them in Native mode, but not in DoP mode, even when given the same bits, too. Weird, but that suggests that they are filtering based on a bit-pattern and not as a signal processing step.

If I try to imagine what the person writing the code that generated these files was thinking, I think I can see where they read the specification differently than we have (or perhaps mis-read it). If I adjust our implementation to match that interpretation, the clicks disappear, but it leaves me feeling uneasy.

We are going to try rolling out this fix in the next release. If it causes ancillary damage, we will back out the “fix” and take another run at this.

Are these files the product of an ISO to DSF conversion?

If so, yet another reason why I would like to have direct SACD ISO support in Roon.

@brian, thanks for the insight. and yeah I should have mentioned as @music pointed out that these files are converted from a SACD ISO to dsf via the JRiver DSD Converter.

Thanks for the clarification!

[quote=“music, post:37, topic:1620”]
Are these files the product of an ISO to DSF conversion? If so, yet another reason why I would like to have direct SACD ISO support in Roon.[/quote]
It is the product of a bad conversion “program” not the conversion itself - a little searching on this is easily found. One software problem is not a good reason to use ISO, especially where there is another tool which does it properly - with embedded Metadata and not a sidecar file.

Clicks occur when people convert ISO straight to DSF with an older tool/program. If converted to DFF first then to DSF (using the ISO2DSF tool) then the clicks are solved.

BUT…If someone has just the DSF files and not the ISO or original SACD then the clicks will always be there.

ISO is an archive format and should be used as such.