New Roon user here. Setup ROCK yesterday and set Allo Boss on DietPi to DSD over PCM under Playback. When I play a DSD64 file, I only hear static. 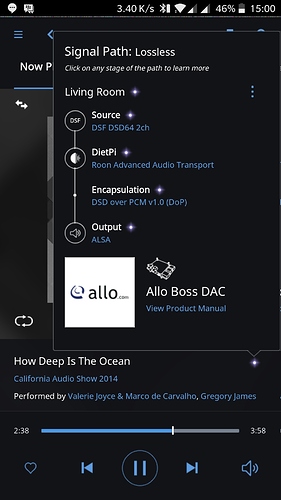 As soon as I change Playback setting to Convert to PCM, it sounds fine.

My advice is strictly derivative. In a similar situation, a user started playing the album (or Track) from the start, and playback worked. Previously, he had only tested it “on the fly.”

It’s a 10-second experiment. Try it and good luck.

Is your volume set to something other than 100%? A lot of “hardware” volume controls presented by ALSA are actually just the standard ALSA software volume control, which treats data as PCM, which will mangle the DoP stream.

@John_V Tried that, still no go.

Any other suggestions? Thank you for your time.

Hi @CostasD ----- Thank you for the report and sharing your observations with us. Sorry to hear of the troubles.

Upon reading this thread I did a bit of searching around as I do not have one of these units in front of me to test with and it seems based on this thread other users have experienced the same/similar issue(s) while using The Allo BOSS under DietPi.

However, another user chimed in on the same thread and mentioned the RoPieee should support DoP With the “Boss”.

AFAIK, the Boss is a PCM5122 DAC that does not support DSD. Roon probably allows sending out DSD64 over DoP since the enhanced 384kHz driver offers the bandwidth required and there’s no way for Roon to see whether it supports DSD or not.

@RBM That makes sense; thanks for explaining.