With Classical Art Song, Lieder, Mélodie etc. I am getting a lot of duplicate composers and lyricists. This is because in meta data the classical “lyricist” traditionally gets a “text” or “poetry” credit which roon seems to interpret as both a composer and a lyricist. Here is an example with Debussy songs: 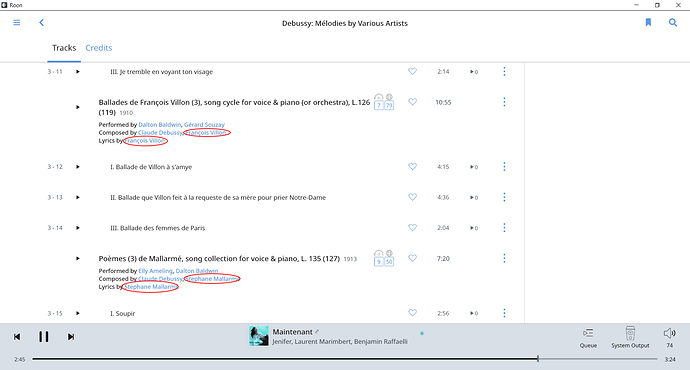 Even if the credit was standardized on “lyricist” it will look extremely odd depending on which country you are from. In France Mallarmé was a poet that Debussy set music to so he is hardly a popular lyricist like Serge Gainsbourg. The same problem can be seen with Schubert Lieder set to the words of Goethe or a Shakespeare sonnet set to music. In the German or English speaking worlds it looks equally odd to see Goethe and Shakespeare credited as Lyricists like Lennon & McCartney.

Mostly these Classical “lyricists” are credited with “text” or “poetry”. Standardizing on “Text” might be the easiest way out for these Classical art song genres. An exception is already being made for “Libretto” for opera. I am sure opera fans would be soon to complain if a Wagner opera was “Lyrics by Wagner”.

The metadata team was meeting this morning and so we looked into this on the call — On our first look we aren’t seeing where this might be coming from on our end. Is it possible that your tags have this data?

Thanks for looking into this. I actually started noticing this with Qobuz albums. So I have no local metatdata. Here is another example. 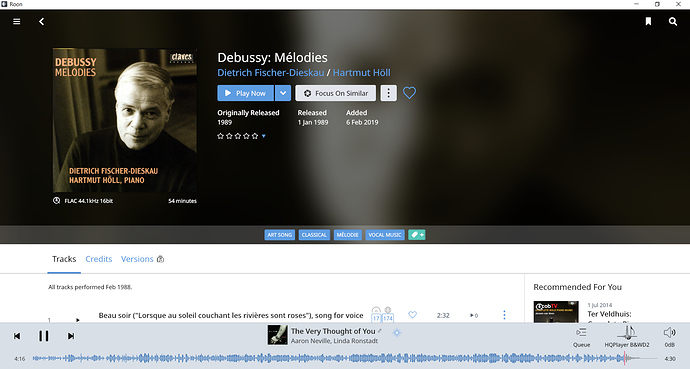 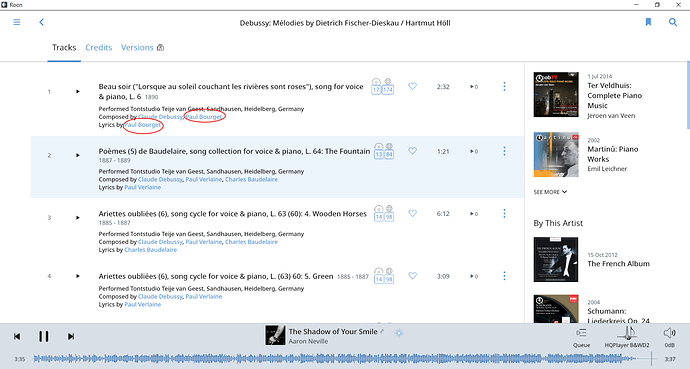 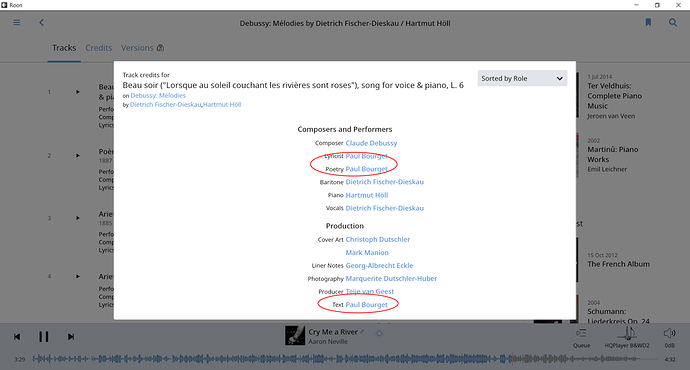 As I say with these sorts of art song examples it looks very odd to credit someone like Paul Bourget as a “lyricist”. A credit of “Text” would probably be the best compromise. Just as in opera the credit is “Libretto”.

Edit: One thing I forgot to mention is that I have “Show Composer Credits” set to “Allways”.

Thanks, @tripleCrotchet. That helps to clear things up and I think we understand better what is occurring. Can you share a link to the album in the first example so we can verify we are looking at the correct data?

The first example I gave was my own file. Instead I give another Qobuz example. So I think the problem is repeatable.

For example, other Qobuz composer/lyricyst duplicates. This time I give Germen Lieder, instead of French Mélodie. I don’t find these examples obscure. It is virtually every time. Anyone interested in Classical art song will find this if they want to use roon to organize their art song music. 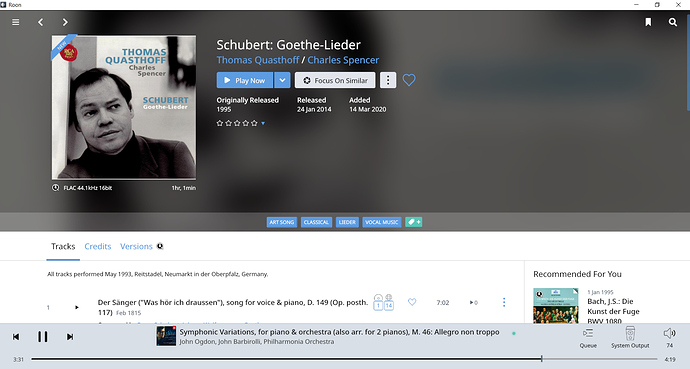 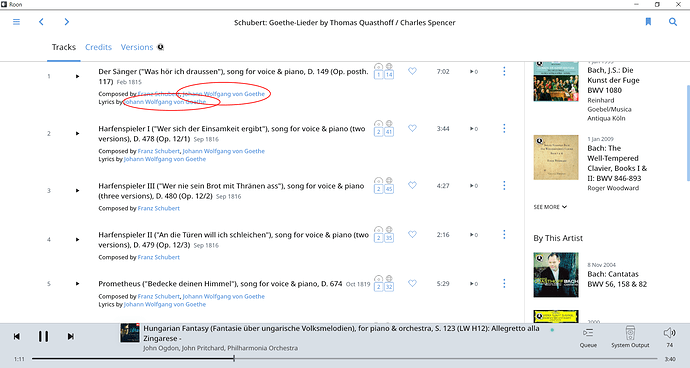 But, I am coming across this all the time.

The first example I gave was my own files. So I don’t know if you can reproduce that. But here it is: 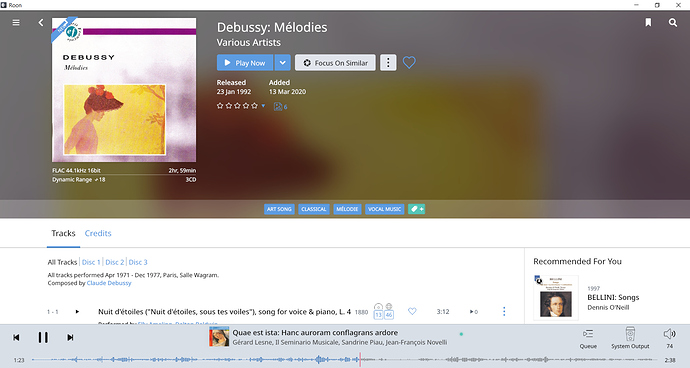 But here is yet another random example from Qobuz that is probably more useful. I think it is easily reproducable. 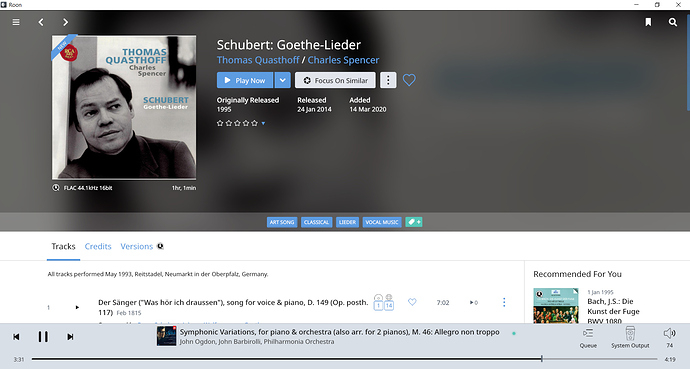 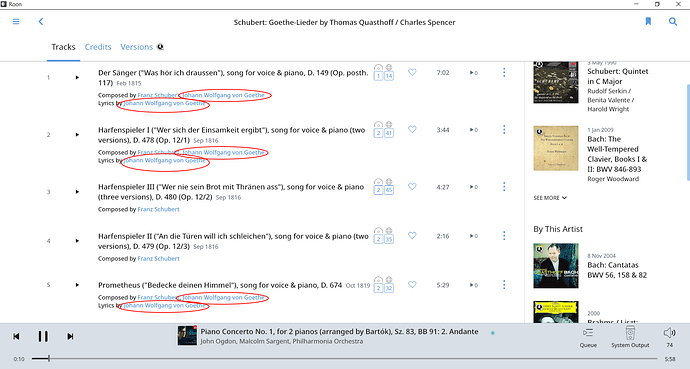 Dear Team, any update on this? I am experiencing a similiar behaviour with a lot of my albums.

I am seeing the very same problem in my colletion of Lieder. Example: 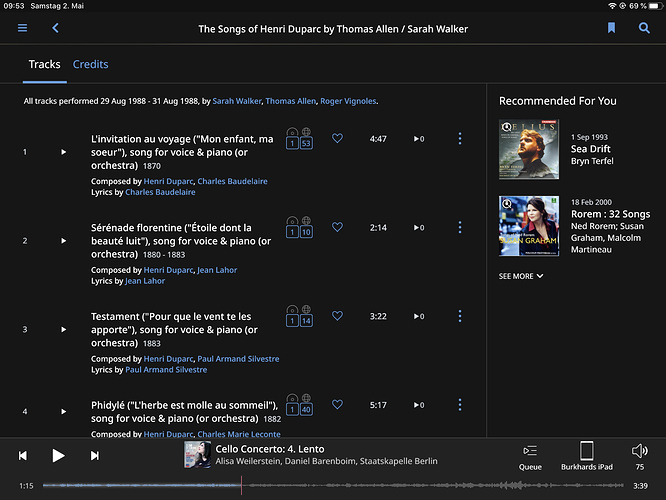 Here another example: Wagner, Wesendonck Lieder.
Here Roon is showing THREE composers, when the only should be Wagner. Thanks for investigating 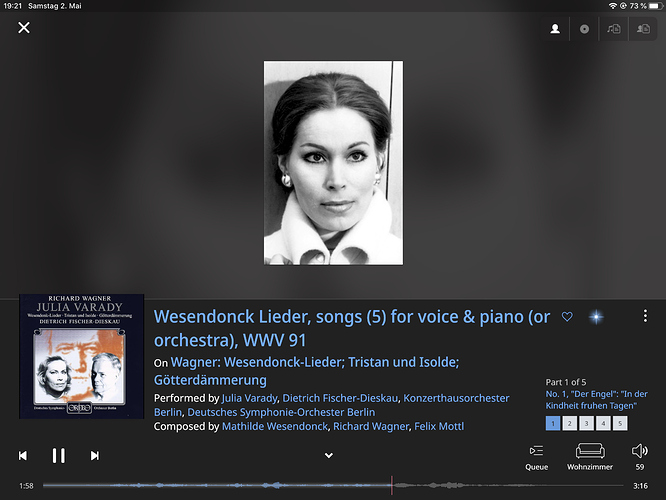 Felix Mottl orchestrated these songs, so he could be there as Arranger. But Mathilde Wesendonck did just the Lyrics

There are also two orchestras showing up here, which I first thought was bad tagging on my end. But everything looks right here.

A question to all those (@SwissChris, @joel, @bbrip, @tripleCrotchet) who experience duplicated “lyricists”:
What is your Import setting for “Tracks Production Credits”? Roon, File or Merge?
(I already know that Tony’s setting is “Roon”)
I have a suspicion that the poets shown as extra composers have their origin in the “Text” credit which belongs to the “Production” category of the Roon Credit Roles (https://kb.roonlabs.com/Roon_Credit_Roles)

This post explains a bit more in detail what I have found out so far.

My own Import setting for “Tracks Production Credits” has until now always been “Roon” and I haven’t tried any other setting. But maybe, just maybe, setting this preference to “File” would eradicate the duplicates problem (and most likely create others…)
Perhaps something to try out? I’ll keep you posted.

I’ve set those credits to “Roon”.

What I’ve just discovered on the above example ist, that at a track level the details are actually correct: Wesendonck is shown for Lyrics, Mottl as Arranger, Wagner as Composer.

But on the “Playing Now” screen, all three get lumped together as composer. I guess this is just another bug in Roon.

Could we get this fixed please. 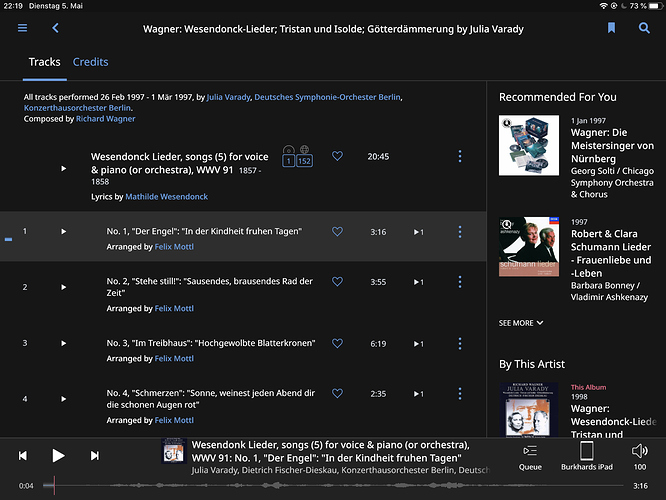 There appears to be no simple solution. I have Production credits set to “prefer Roon” simply because I have no Production credits of my own. I do not maintain them and have no intention of maintaining them so I will be leaving that switch set to prefer roon.

Out of curiosity a changed the switch to prefer file. In general I do as little tagging as I possibly can. So I have certainly never maintained any Lyricist or Text credits. If they are there it is by accident because EAC or dbPoweramp put them there when I ripped a disk.

I randomly checked a few disks. It makes no difference. In most cases the duplicates are still there. When there are no duplicates it is because there is no Text credit. Roon seems to set both a Lyricist and Text tag that are not in my files. Why roon is treating a Text credit as a composer I do not know. I have now set the switch back in case there are other dependencies. But you can try it yourself. Roon will re-calculate your library but it only takes a few minutes and may work better for you. 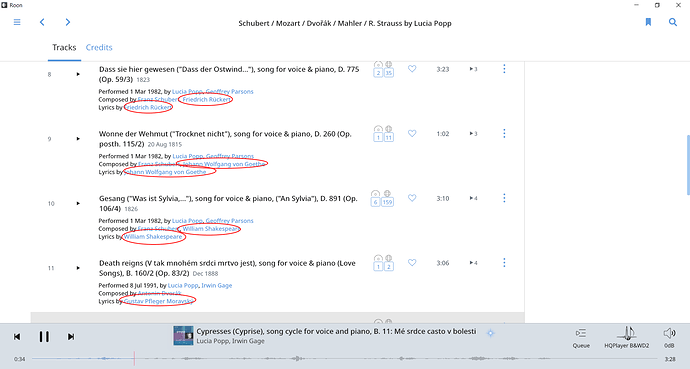 As you can see. William Shakespeare gets the same credit as the guy that did the liner notes for the album and ends up being duplicated as both a Composer and a Lyricist. 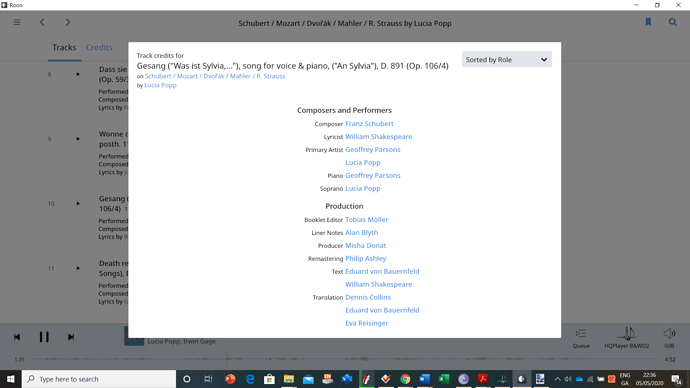 @tripleCrotchet
You were right on both counts, Tony. I just changed the “Production” preference setting to “File” and it not only took 10 minutes or so but also did not bring about any change.
Apparently this “File” setting does not mean that Roon metadata in the Production category are ignored. Not at all. They are still all there. Is this a bug?
Or should we take more notic of the wording in this setting and read “Prefer File” as “Only if the user delivers other metadata will Roon metadata not be shown”?
That would imply that I should create my own production file tags for each and every credit role in order to be sure that they overrule the Roon metadata? But that would be ridiculous, wouldn’t it?

I spoke too soon.

That would imply that I should create my own production file tags for each and every credit role in order to be sure that they overrule the Roon metadata? But that would be ridiculous, wouldn’t it?

Perhaps it is not as idiotic or undoable as I first thought. As long as one limits the creation of the overruling file tags to just one, namely the PERSONNEL tag for the “Text” role. (In addition to changing the “Production” preference setting to “File”, of course)

I have just tried it out on the same album, volume 12 in the Complete Hyperion Schubert edition.
I manually added a file tag to all files at once like so: 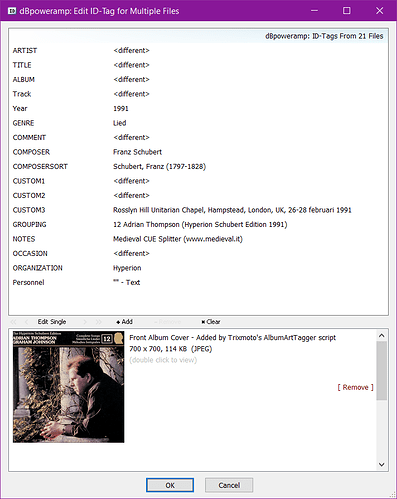 image712×895 122 KB
The exact text inside the PERSONNEL tag reads: “” - Text
This resulted in the following album view: 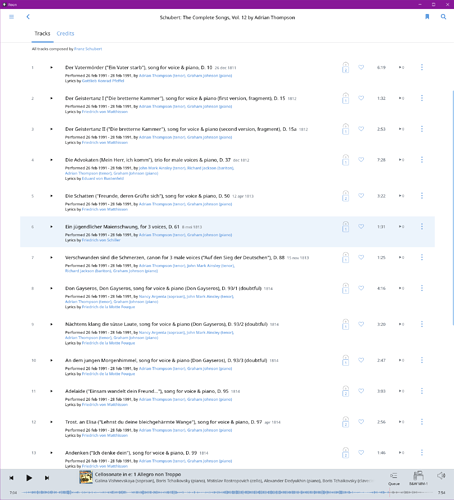 image1920×2110 503 KB
Now it says at the top of the track listing “All tracks composed by Franz Schubert”, just like it should. No duplicates.

Whereas without the added PERSONNEL file tag the album page looks like this: 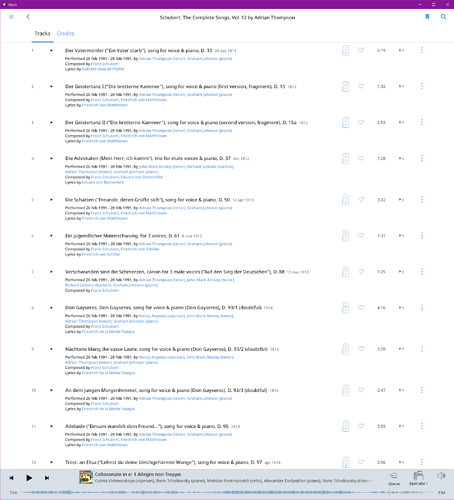 Perhaps there is a little light at the end of the tunnel? Adding such a file tag can be done in one sweep for very many files at once, so the time investment doesn’t need to a big impediment.

EDIT (1):
There is a rather strange artefact in the album credits, though: 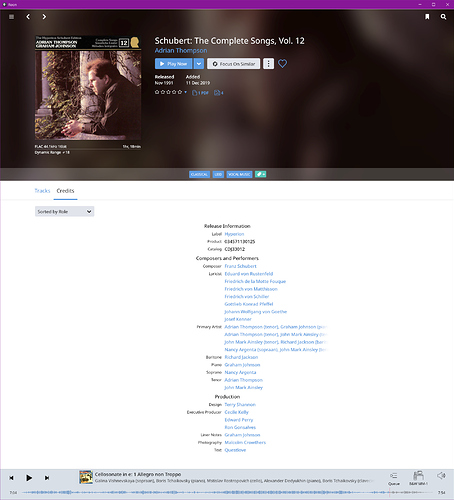 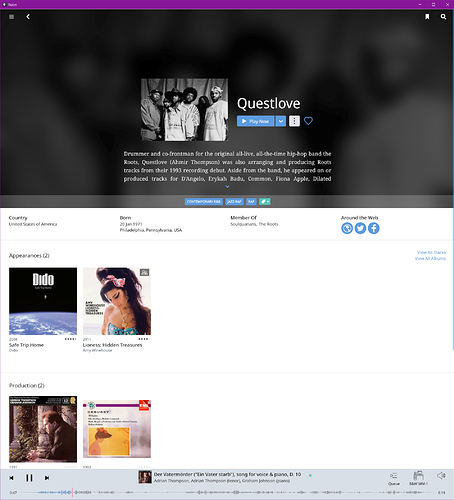 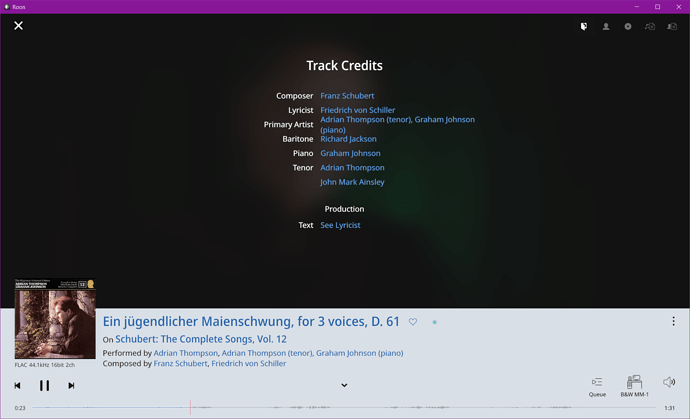 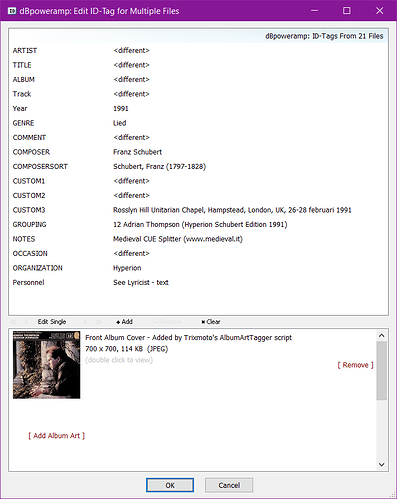 image712×895 61.4 KB
The album page is still exempt from duplicates.
Not an ideal workaround, but perhaps an acceptable one for those who are very much vexed by metadata clutter in the Album page.

@tripleCrotchet
Tony, I happen to have the same Debussy box with Mélodies sung by Ameling et al.
Adding a “See Lyricist - text” PERSONNEL tag makes it look like this: 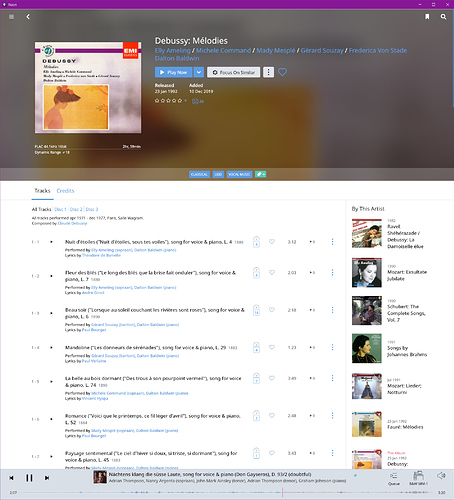 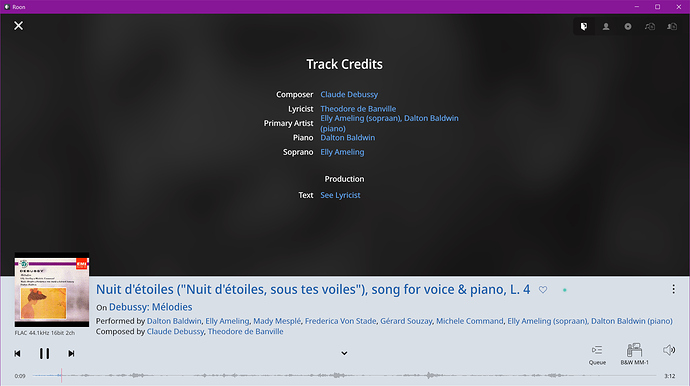 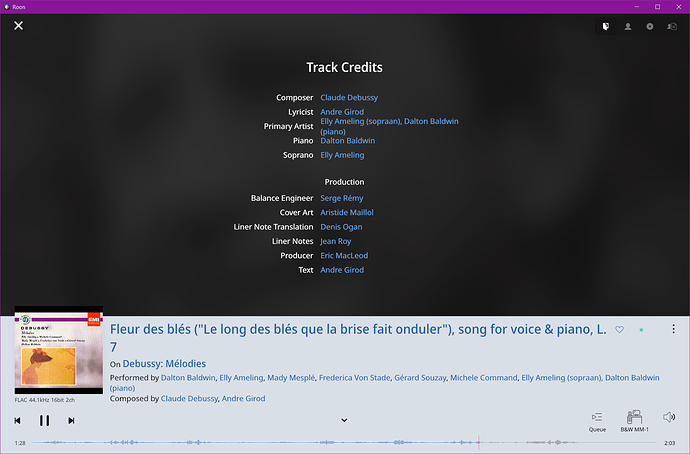 image1920×1264 378 KB
Perhaps losing all this Production category information is too steep a price to pay?

I think I should try the “Merge” setting for the “Production” Import preference and see what that does…
EDIT (3):
Nope, not a success. It just adds the new user tag to the Roon ones: 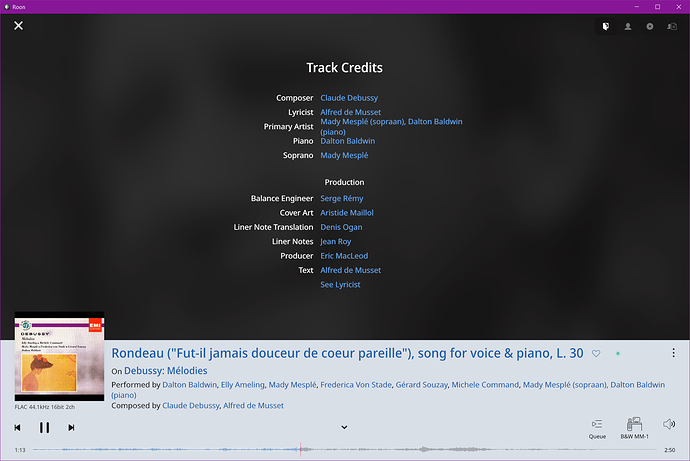 So, what it comes down to is that the user is either stuck with the duplicates or loses all production metadata supplied by Roon.

So, what it comes down to is that the user is either stuck with the duplicates or loses all production metadata supplied by Roon.

Looks like it. Hopefully, these experiments can help roon fix this in future releases.

My own preference, if roon did go to the trouble of fixing this, would be that roon did not bundle the Classical Vocal song writers as “Lyricists” like pop music but did something to distinguish them. I see “Text” a lot on my album notes and that works for me. But “Poetry” should be maintained if that is already coming through meta-data. After all, some of it is Poetry and some of it Prose. Roon already makes an exception for Opera songwriters as they are distinguished as “Librettists”, a sort of special category of Lyricists.

l’ll try with your “See Lyricist” trick. I hadn’t noticed before.

Undortunatly Roons metadata handling is pretty much a desaster and totally inconsistant. I prefer no info rather than wrong info. So when I set Roon to „use file“ and there is no info in the file, it should display nothing rather than the crap Roon has in its own database.

Is this already a bug fix („feature“) request, otherwise I‘ll create one.

@bbrip, I think this Topic does not have the status of a feature request. On the other hand, asking Roon to fix a bug is not really the same as requesting a new feature, I suspect. All we want is for an existing feature to function correctly!
Do you agree, @dylan?

@Hans_Valeton the point is that the Roon guys always ask users to put in a feature request. They don’t seem to understand the difference between a “feature” and a basic “functionality” working correctly.

@dylan feel free to correct me, but I hope we all agree that this is anything but expected behaviour.

@Hans_Valeton: I switched the “Tracks Production Credits” to “file”, re-scanned one album affected, no change. This is clearly a bug.

@SwissChris Did you also add a PERSONNEL tag with something like “See Lyricist - text”?
If not it will most certainly not work. You have to overrule all Production category metadata as supplied by Roon by adding just one Production category file tag of your own.

This is clearly a bug.

On this we certainly are agreed!