This is hard to pin down because it is tough to reproduce, almost by definition it takes you by surprise. But I do believe there is a deep bug in the Tidal integration in that Roon doesn’t find albums in Tidal until you add at least one to your library and then a Roon pulls some metadata or does something that causes it to recognize the artist and albums. I think it has to do with viewing as a composer rather than artist when not in the library.

OK, thank you for your qick response. The thing is that I want to discover albums I maybe didnt know about. Not search for ones I already know and a big reason why I chose Roon.

Well, Roon is SUPPOSED to do this, and in most places I think it does a good job of it. There is some bug, very hard to identify and reproduce because you have to fix the issue to confirm the problem.

Basically, I believe that Roon has a glitch in its integration with Tidal in that it does not display Artist search results if that artist isn’t already in your library as a primary artist. Once you find one album by that artist and add to your library, then Roon downloads whatever metadata that allows it to connect to other albums. My thought is that it’s looking at some composer view and won’t acknowledge artist. It does not display the toggle between composer and artist. And the view thus is only compositions, which isn’t a good way to find albums.

I have seen it a few times, never been looking for it and only noticed the pattern after the fact. That is why this is hard to pin down.

Can you share some additional screenshots of what you see on the Elton John artist page, including the albums that you do see?

Hi!
As recommended I have searched for the albums and added them to my library in Roon and made them primary versions, so it does not look the same now, and yes, I had most of them in my library (not Tidal versions but on my computer). Those versions were not flac or mqa, but mostly mp3 which I don’t want to play. I wanted to play the Tidal versions which I couldn’t see without searching specifically for them. 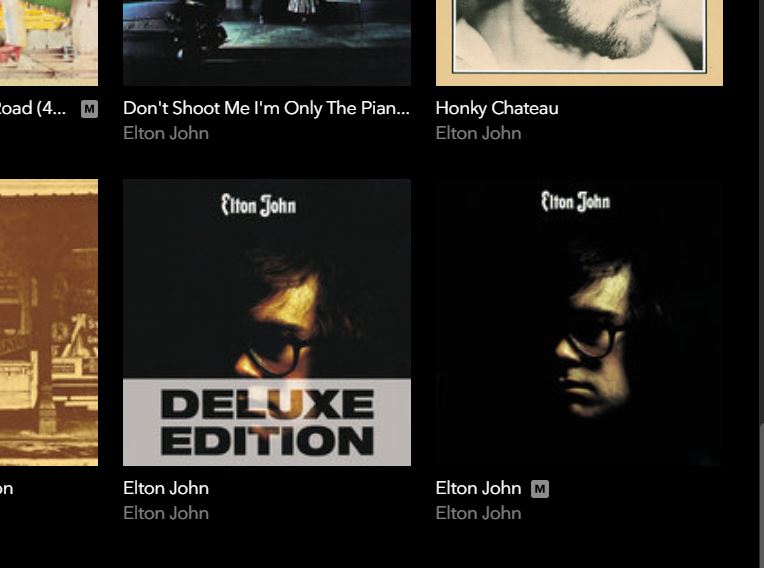 Here you see one picture of my library in Roon where the Elton John “Elton John” album is (mp3-version), it is not a Tidal version. Then there’s a picture of Tidal where you can see the album (mga-album version). Then last you see a picture of Tidal albums in Roon, The mqa-verison is not there.

This is likely the reason for what you were seeing here.

In cases where you want to find an alternate version of an album already in your library, the best option is to navigate to that album and go to the Versions tab. Here you can see any other versions of the album available to you and add them to your library.

OK, thanks very much for your qick response