MacBook Air M1
Remote and Server are separated on the same machine. The problem occurred before as well when they were merged.

Vodafone ISP Router Connected to a Firewalla which manages my network.

This problem got reported multiple times but no solution that was mentioned worked for me.

From all the Hegels in this screenshot (I’ve renamed them to better be able to tell them quickly apart for switching) only no. 2 was able play via Airplay. 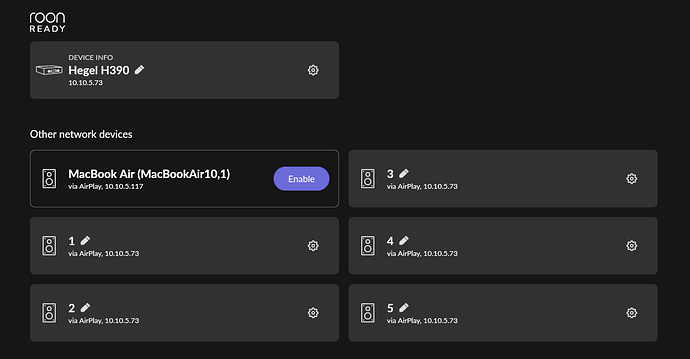 At some point during the day Roon looses connection to the Hegel. I was looking at the Audio devices and in that moment multiple devices got added all at once. Which can be seen in this screenshot. 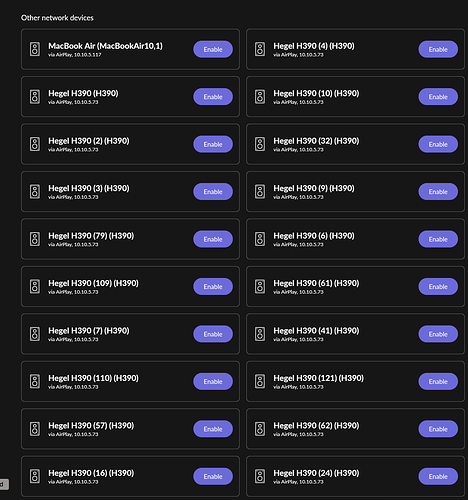 What I’ve tried so far:

In the beginning the devices got deleted but came back after some time. Now the list doesn’t even get cleared anymore.

I wouldn’t mind this problem at all but throughout the day Roon looses connection to the Hegel and stops playing. I then have to click play and then it works for some time again.

Here are the former threads:

Why is Roon listing my Hegel H120 multiple times under Other Network Devices? You will notice that they all have the same IP address and primary name. [roon] Appreciate some clarity on this. Thanks

I noticed that everytime I reboot my router, a new AirPlay instance of Hegel H390 with the same IP-address appears in the device list

Strange…. After upgrading to the ROON version of my Hegel, the H190 appears twice as an Airplay devices. I can play to both… How can I remove one of them (not disable, but simply remove). Both have the same IP address. In the picture it is H190_xxxx and Hegel Living [image]

I have to add that I reset the Hegel just after I created the posting and at the moment that ‘newly’ reset Hegel is the only Airplay device currently added. So no duplications as of this moment.

I’ll wait and see and maybe this resolved the issue…

Its the one on the bottom left (the old copies are still there):

Which Firewalla is it?

Do more appear when you turn off/on (standby) the Hegel?

I have to add that I reset the Hegel just after I created the posting and at the moment that ‘newly’ reset Hegel is the only Airplay device currently added. So no duplications as of this moment.

This some times happens (or use to with Apple TVs).

So far so good. There is still no duplicate.

If it stays this way then resetting the Hegel was most likely the solution in my case. I’ll give it some time and then mark the solution here.

After a restart just now of the Server the old duplicates vanished so that its now all clean again!

Wow this feels so good

For trouble shooting at Hegel and Roon. Before the reset the only things I had changed in the Hegel were the sleep time to 1 hour and the device name to Hegel H390 via its Web UI. Maybe that bugs out at some point. I’ll set these settings again and keep an eye on it.