How Are You Using RoPiee with Display?

I am just curious how you all are setting up your Ropieee with display. For example, I have Rpi2 with a pi2Design dac hat. It would be cool to throw a display on there and have it show what is playing, which I understand RoPieee can do. The confusion for me comes in with the case how you are putting it all together in general. How are you housing the Pi, screen, and whatever hardware you are using for the audio side?

Maybe it is time for a “Share Your RoPieee display setup” thread with pics!!??

I use 2 different cases…2 units are RS Electronics cases and one is an Element 14 case - the E14 uses an IQAudio DigiAMP+ hat and has had to be modified to get at the speaker and power entry points.

RoPieee LCD Beta stuff - tell it like it is RoPieee

Awesome Harry! Hope you like the digiamp+. Did you also get the 19vdc smps or do you have one maybe from something else…but I’m told 12-19v should work too

I have two pi’s with 2 screens. One also has a hifberry amp+ the other a hifberry Digi+ output board. As the amp+ is quite big I never found a case that could house it and the LCD so I went for a nice bamboo stand number from Amazon and the amp and pi just protrude at the back with no covering. Its no longer available. Some like he Pimoroni stand but I had one and it started to push the screen off the housing.

The one with dig+ I have the rs official pi LCD case, a little cutting here and there is necessary to bae able to house the Digi + but it’s all full enclosed which is nice.

I use the screen to control playback as its often easier to stop and play without having to be attached to phone or tablet all the time. If it gets the added library support you can get in the webrowser extension it would be amazing and I love the now playing.

I have used a few cases but none were really satisfactory. The Pimoroni stands work fine for me but I have taken to just using perspex stands found on AliExpress. Cheap and do the job.

I am using mine right now as a convenient small display next to my TV so I don’t have to start the whole system up, and to see what’s playing and skip tracks easily without having to deal with the android connection issues I am still having. 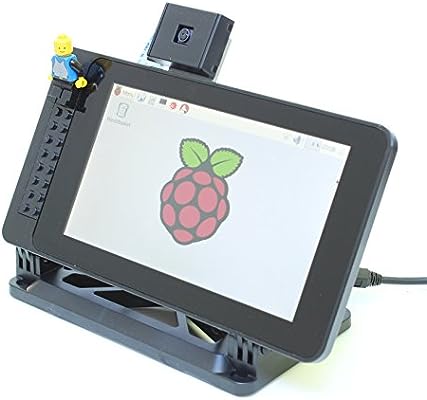 
The screen is on a Pi3 and is only a screen right now.
I have a HiFiBerry Digi+ on a Pi2 that is the end point.

I have a HIFIBeery Digi+ pro that I added a BNC to that will go on the screen, there are just some fit issues that I need to work out with the case. The audio on the digi+ is on the bottom side and interferes with the stand. So just need to get time to do something about that.

The smarticase was the first I tried and discarded

I may need to do some serious mods to get it to work with the HIFIBerry with the BNC/Coax connection. Or find a different case…still thinking about the plan…

Now have 3 Raspberry Pi with Hifi Berry “hat” devices, and am thinking of making a Pi for control purposes (no “hat”). It needs a touch screen monitor, as is discussed in this thread. Would the Elecrow 10.1 Inch IPS LED Touch Screen be a choice that would work, or must the “official” 7-inch display be used? (Amazon link to the 10.1-inch display: https://smile.amazon.com/Elecrow-1280x800-Resolution-Portable-Raspberry/dp/B073QPZZTN/ref=sr_1_8?ie=UTF8&qid=1507173637&sr=8-8&keywords=raspberry+pi+monitor+mount

It won’t work with RoPieee

I’ve got 4 RPis dotted about the place some with and some without HATs and have tried at least 5 different frames for the 7 inch screen. I finally settled on this one (https://www.amazon.co.uk/gp/product/B01N4CGHLM/ref=oh_aui_detailpage_o02_s00?ie=UTF8&psc=1) as being dead simple but looking OK. Amazon are out of stock at the moment, but a quick google search for bamboo Pi screen should find another source.

The only issue is that audio cables from the HAT appear over the top of the screen unless you use right-angle connectors. An alternative is to house the Pi and HAT in a separate enclosure and connect the screen using a longer cable.

This will be used only as a control device (no amplifier). I have 3 other Ropieee (Pi) devices with “hats” (amps or DAC connected to an amplifier) that are now running “headless” (without direct screen-based control).

Thanks everyone for the ideas. Now I have to decide which of these to go with…

That’s the one I have on my second system. Yep you need right angle adaptors for all the hifberry hats as they insist on putting them on top rather than to the some like others.

Hi guys. Just to be clear, it’s possible to use a RPi with RoPieee and 7" screen just as a display only, displaying what’s playing on another roon endpoint somewhere? If so, how does one specify which roon endpoint we want to display? Cheers.

You configure in the web page which zone you’re controlling, and that’s it.

That was the exact question I had. Hardware came yesterday, I’m also building one soon!

Got the new display, the Pi, and Ropieee. Installed everything. Activated the Ropieee controller extension in Roon. Haven’t done much else - other than to confirm that I can see what is playing in the zone I selected in the web-based Ropiee setup, and I can stop or skip songs with the touch of a finger. Yes that works, and that is helpful. Also glad to have the clock display when nothing is playing… But…

If any of these questions is answered “yes,” I’m sorry - but I need a bit of coaching. How do you do that? If, as I suspect, the answer is “no” - I assume there is development work being done (correct?).

The first 2 are a ‘no’. And ‘assuming’ that development work is being done seems a little bit too much. This is a project that I work on in my spare time.

For the third question I’m not entirely sure I understand you… RoPieee supports controlling a grouped zone if that’s what you’re asking.

I use a USB DAC (Chord 2Qute) so my RoPieee setup with display is pretty simple. I use this case http://a.co/broeWZy with 90 degree angle adapters for power, USB and ethernet. Power is a iFi Audio iPower wall-wart. Excuse the blurry pics, but they show how the 90 degree adapters tidy things up, somewhat… 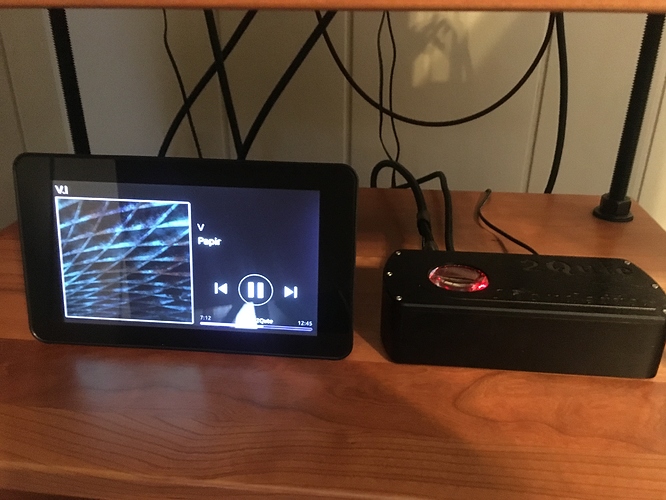 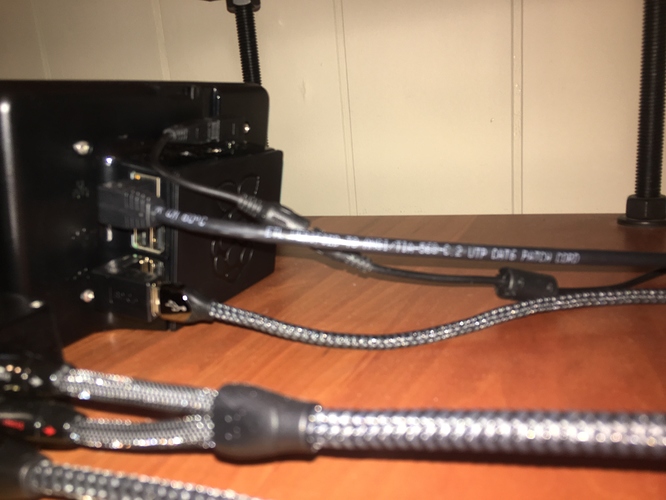