Maybe I have missed this feature? I am running Roon on a headless Mac Mini, controlling it from an iMac, like many others waiting on the iOS version. However there is one simple request I have. I am using an Infrared Control (Logitech Harmony Smart Remote) for my system. It would be great if the Roon Remote and/or Server version of the app would accept the Apple Infrared Remote Signals like e.g. iTunes/Apple TV would do. So I could skip to the next title, go back, adjust volume etc.

I use a Harmony One with learned Apple remote commands and it can control skip and pause. Not volume.

Thank you for letting me know. Excellent. I checked the Apple Preferences / Security settings. Now Play/Pause, Skip Forward and Skip Back works. No volume control though.

It might be an idea to think about integrating a basic infrared control setting (if possible) that would allow the Roon App to be completely controlled with simple remote commands (like you would do with an Apple TV). This would be great when running Roon in Fullscreen mode.

For Harmony remotes, can’t you tell it to control volume on separate hardware for each Activity? On mine, for a “Play Music” Activity I can tell Harmony to control my PC for everything except volume, which should be changed on the amp, which the Harmony is aware of and will direct volume changes to instead of the PC.

Absolutely. And I do so. It just depends which device I am using. If I use my Mac mini Server which is connected to my Receiver I adjust the receiver volume with Harmony Remote. If I would like to use my software controlled USB DAC to listen with my headphones however I would use the volume slider on Roon or iTunes.

There’s a piece of software for Windows called Eventghost that will let you create a mapping of IR commands to their keyboard equivalents. You can setup a profile for Roon so that when in focus, those keyboard commands become active. It’s possible that you could run this program via VMware and use these features on your Mac.

I’ve been trying to use the Apple IR Remote to control the Roon application on my Mac, it doesn’t seem to work at all.

Roon’s Remote app for the iPad works great - but sometimes I just want to use the small/IR remote for very simple transport controls.

Should this work? Am I missing something?

It works on my Mac (iMac). I didn’t have to ‘do’ anything, the transport commands were simply passed through.

Thanks for the comment, it’s helpful to know that it should work.

If it weren’t for case (b) “it works with the VLC Player”, I’d suspect some preference setting re: the remote controlling iTunes preemptively - but since VLC works, I was hoping for the same with Roon…

If anyone has any suggestions on something I need to set to make this work properly on my Mac, I’d really appreciate it … thanks in advance.

PS. I should mention, the IR remote doesn’t work with Amarra either. But that used to require a special mini-app, I don’t know if Amarra still needs that.

I used to have VOX installed - which had a pass through app for IR & media buttons (On the keyboard) - could it be that?

I just began working on a Roon behavior for RemoteBuddy. RemoteBuddy is a great app for controlling just about anything with any remote on OS X.

I’ve never done this before, so I have no idea how hard it is. Feel free to give it a try yourselves

But getting a Roon behavior working would allow for excellent and entirely customizeable control. If a button doesn’t do what you want, just change it. I’ll update if I get it working properly.

Anyone running a Mac as a media center ought to get RemoteBuddy.

Here’s a finished Roon behavior (plugin) for Remote Buddy if you want to try it out. It’s very simple, but works well enough with basic transport controls. Selecting it makes Roon the active app and restricts remote control to Roon only. It looks really nice if Roon is in fullscreen mode and just slides in from the side when the behavior is selected, and restricting controls to one app prevents unexpected behavior like launching iTunes or playing a track in Spotify while trying to control Roon.

What we really need is for Roon to incorporate more keyboard shortcuts and a better Apple remote behavior, so one could easily implement them in Remote Buddy. As is, there’s very little to do beside skip tracks and play/pause. But the above behavior is a big improvement for anyone using a remote control nonetheless.

That’s true…
If there were more keyboard shortcuts, you could also easily integrate EventGhost on the Windows side

@Brian_Murphy
Sorry Brian, yours is the only @ that I know off by heart!
Could you weigh in here when you get a chance please? I’m sure the preferred remote method for most users will be a Roon remote on a handheld device etc. however sometimes that is out of reach or not practical while a programmable remote is almost always at hand.
IR would be nice at the very least however you’d then need to develop and support for all platforms and their capabilities. IP control would be really great and is supported by Harmony’s top units (which I own) and the upcoming Neeo which I will own if it ever ships! I’m sure other programmable remotes also support IP control too.

Check out this latest feature update from Neeo that adds Apple Music and Spotify player sync and control.
Am I alone in thinking Roon running on this form factor would be fantastic? Saves me having to pull out a phone or tablet while listening with company, something that can kill the mood!

I like what they’re doing with the remote hardware. Hopefully they can deliver. Are they showing the Neeo app controlling Sonos? I’m assuming they’re leveraging the Sonos platform rather than doing a direct integration with Apple Music and Spotify.

More integration been shown, this time Plex on Neeo. 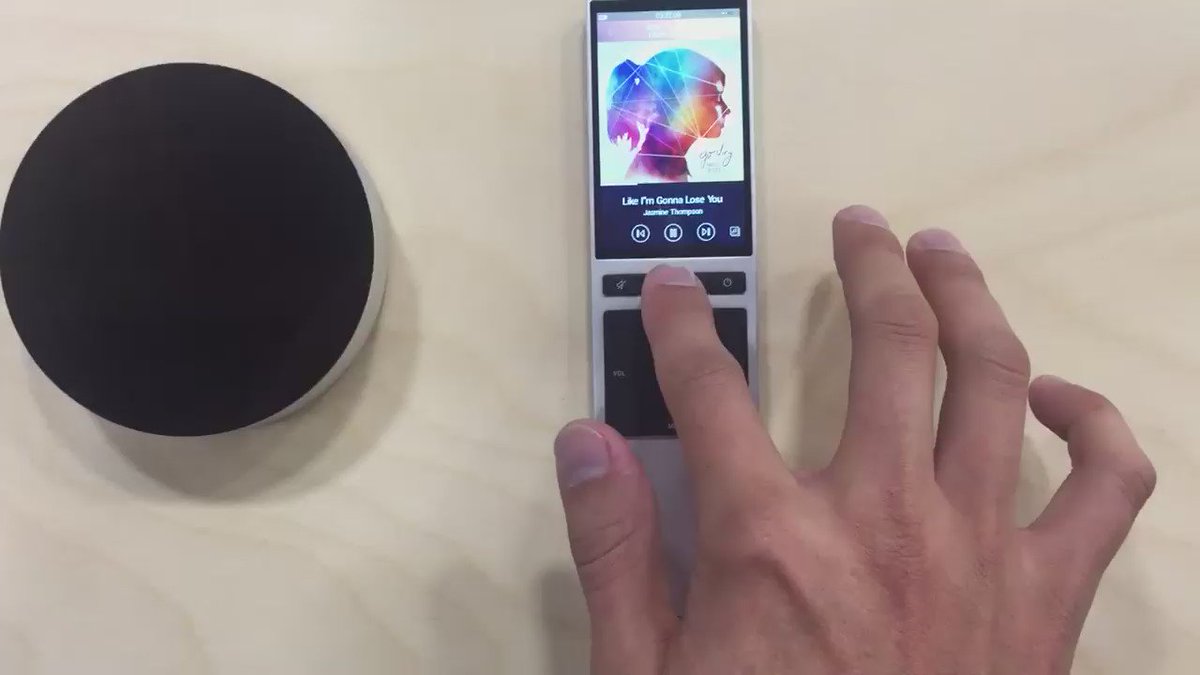 Any news on Apple IR remote support for volume control when running Roon headless on a Mac Mini? Still does not seem to work. Would be great as I use my DAC as pre-amp as well and it has no remote (Chord Hugo).

Yes I’m wondering this too. How to control Roon server with an ir remote (on Windows in my case).
I know from an old post that this has been asked before: Remote control of play/pause skip/rewind via USB DAC
Is there any progress with this?

In my current setup I can control Roon if I run a Roon Remote on the same machine as the Roon server. But Roon Remote has to be in focus and other programs on the machine seems to hijack ir commands from time to time.