Issues with play from here and queue

@support since I have updated my roon phone app recently roon has been playing up.

If I click play from here it will play another song. When I press play next it immediately plays next. The queue looks all messed up.

I have also noticed sound degradation since the update. Sharper shrill highs and not as much oomph in the lower bass. Are these known issues?

Can you confirm that your Roon core and iOS app are on version 1.4 Build 294?

@support could this update have impacted on the sound quality at all?

Can you confirm your Roon Core is Build 294 ?

If anything, some people have indicated an improvement in sound quality.

We need to make sure you are running the new version on the core as well as your android app. 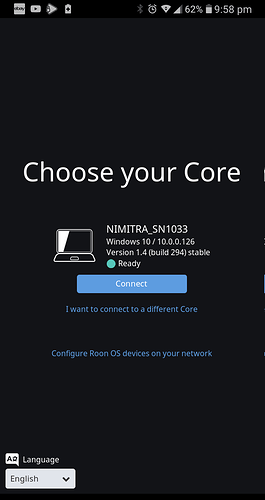 Yeah I have notice since I have upgraded I have really shrill and harsh highs. Think Michael Jackson Vocals on the high notes all of a sudden sound shrill and grating. Low end punch has also lowered as well.

Is there anyway I can revert back to am older version to test to see the difference?

@support something is wrong. As I think I mentioned I press play album and it will play the album all scrambled up. The highs sound pretty harsh. This update isn’t good for me. The queue is messed up and isn’t working correctly. I tried it on many devices and its the same. Can I revert?

Hi @STEPHEN_ANDREWS ---- Thank you for the report and sharing your feedback with us. The insight is appreciated.

Moving forward, as a general rule we strongly recommend against downgrading to previous builds when an issue arises as this not only has the potential to cause other problems, but will make troubleshooting the issue at hand much more difficult. Furthermore, to help us understand this behavior you are reporting may I very kindly ask you to provide the following:

“As I think I mentioned I press play album and it will play the album all scrambled up. The highs sound pretty harsh.”

“The queue is messed up and isn’t working correctly. I tried it on many devices and its the same.” 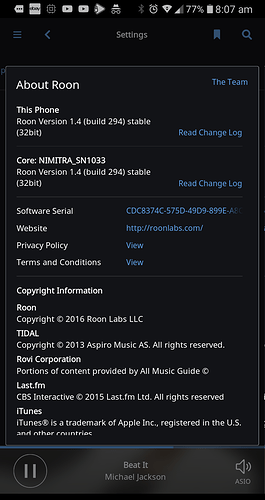 Running a nimitra music based server 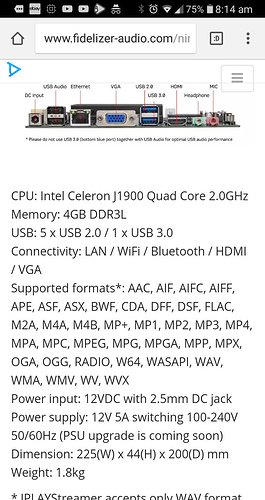 I have 15685 tracks. All uncompressed flac minimum with 5% DSD or high definition size

I just went to MJ thriller and pressed play now

Firstly song that came up was “Lady in my life” which is the last song. The whole Thriller album is queued but All songs are jumbled up as here. This never used to happen. It used to correctly play the album in order 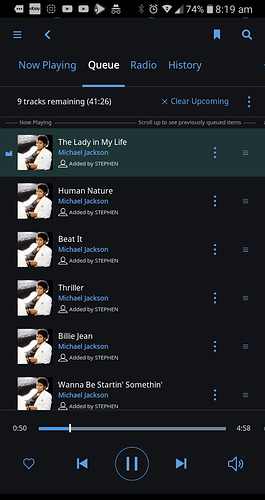 Here is my signal path. Keep in mind this is one of the handful of DSD albums I have. This signal path has always been this way 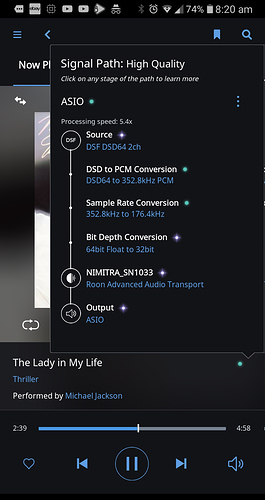 Now as I listen, Mjs vocals on the high end sound shrill. It sounds digital. I am disappointed because I used to have fantastic sound and this update has really gone backwards.

I need to know that if all else fails I can test and revert back to the old version if I need to in the meantime. This is almost in listen able to my ears.

I can see many people are reporting better sound. It makes sense that whatever has been changed has obviously has a negative impact on my particular Setup and all I want to do is go back to what I had before. Thanks also I much for your fast response. It’s still boxing day up there (it’s the 27th here in Australia) so I am pleasantly surprised you are responding so quickly after Xmas so thank you for that

Figured out the shuffle was on. That part is ok. I just want the previous sound I had with the last version of roon

Thanks for touching base with me @STEPHEN_ANDREWS, glad to hear the the “queue” is now being displayed as expected with the “shuffle” disabled.

Moving forward, in regard to the sound you are hearing ("Mjs vocals on the high end sound shrill. It sounds digital.), I will need the following information to properly advice on this behavior:

@Eric
I am using a deqx express hd 2 as my dac and preamp endpoint. Www.deqx.com

Until this 1.4 mess was released my system was sounding magical. Now all the life has been sucked out of it and it sounds very midfi. Something major impacted in on it and its not subtle

No it’s all files. I used that as an example. Doesn’t matter if it’s flac or DSD it all sounds average now…

If you cant help me I would really like to try roon 1.3 again

Hi @STEPHEN_ANDREWS ---- Thank you for getting back to me. The update is appreciated.

Moving forward, I have setup a meeting with our tech team to discuss this issue you are reporting with the “sound quality” during playback with the most recent release. Furthermore, I have also went ahead and enabled diagnostics on your account to see if our techs can determine if there are any issues occurring based on the Roon logs that will be attached to the diagnostics report we receive.

In the interest of getting this resolved for you in a timely manor I am certain the team is going to want to know the following:

Hi yes I has wasapi zone and it is not really Different. I don’t have a second zone so to speak only the one output and it’s a sip vs wasapi.

Yes I have it set up in that configuration. In the interest in experimenting I am going to try it under different ports despite what the site says. Either way I had it set up exactly as nimitra specifies when I was getting the good sound

I have also tried it set up by removing iso regen and tx ultra and only trying each one in the chain as well.

@eric
So after I read your last response this morning for the sake of experimenting I put my usb hard drive in the bottom usb input (as NOT recommended by nimitra) I have noticed this morning a much better sound similar to what I had previously. Did your guys happen to do anything recently on my set up on the back end? I don’t want to put it back to the top input in case I dont get this sound back. Let me know if you guys did anything. Before I went to bed the sound was very average. Now it seems much better.

Hi @STEPHEN_ANDREWS ---- We have not changed anything on our side. The comment made in my post was after having done some further research into the Nimitra. I am now wondering if the USB port that was originally being used could be having a problem, if things are now sounding better.

Is there another port that they recommend using that you can test with on the unit?

I’m not sure. I will have to go and look. Is there anything that you guys are able to tweak?

I have been listening for the last few days. The sound seems a little better but not what I remember from 1.3 The high ends still have a harsh digital tone on male voices. Lionel Richie Michael Jackson etc