iTunes playlists imported, but links not visible on album page

I’ve had issues with playlists before, including when I first migrated to Roon (2017) and was unable to have any iTunes playlists visible in Roon. I got halfway through a service ticket with Roon, but the problem mostly corrected itself following a version upgrade. Since then, all my iTunes playlists have been visible in the Roon playlist section, but with only sporadic visibility of “playlist links” in the album page view. The majority of album pages have appropriately displayed the playlists links for various songs, but some album pages simply do not. I could never identify a pattern. I’ve let the problem go since then, and just lived with it, until…

For the first time since then, I created new playlists and deleted old ones. These changes all show up in the Roon playlist section, and the music can be navigated from there. But, now there are ZERO playlist links on any album page. Roon is clearly able to see the playlists, but for some reason cannot populate the links to the songs on the album pages.

Apologies for the delay in getting back to you here, can you please share a few screenshots of the behavior you’re seeing? Do you notice this only on iTunes playlists or TIDAL/Qobuz playlists as well?

This particular problem “resolved”, but as I mentioned earlier, playlists continue to be flakey in Roon. I am only using iTunes generated playlists. Whenever there are changes to Roon or a new playlist is generated, the playlists disappear from the Roon album view. To resolve the problem I described in my post, I added a song to each playlist in iTunes- and then somehow the “change” forced the playlist to now generate in the Roon album view. Afterwards I went back to remove the track.

Now after downloading Roon 1.8, they’re all gone again. I just added a track back to each one, and I assume they’re reappear over the next 24 hrs (as has happened before) … but we’ll see …

@noris I added (and subsequently removed) a track to each playlist, to “refresh” the playlist and force it to re-appear in the album view …. magically all the playlists reappeared.

Today Roon updated to a new version again…. again, all playlists are gone. I know how to “fix” this now, but it’s tedious. Something is fundamentally wrong with the way playlists are being handled in Roon…

I am only using iTunes generated playlists. Whenever there are changes to Roon or a new playlist is generated, the playlists disappear from the Roon album view

Have you ensured that you export the iTunes XML each time you make a change to the playlists there? You will need to re-export the XML to see updated playlists, please see the following threads for reference:

Hello @phantomtides , Thank you for your patience here while we’ve had a chance to look into this further. I spoke to the team regarding this one and we believe the main issue here is that the Library.XML file is missing and instead you have a different XML file imported. Can you please try to Open Music App → File → Export Library and put this XML in the Watched folder MAINSTREAM ? This file contains info about iTunes playlists and the path to files in the library. Then XML playlists import…

Can anyone tell me how to export playlists to and keep them in sync with Roon from Apple Music, the successor to iTunes? I was used to manually exporting the XML file in iTunes. Roon recognized that and synchronized all playlists. In the Music app there is now only a Music Library file; “Music Library.musiclibrary”. I’m running Roon on macOS Monterey version 12.0.1, MacBook Air, M1.

Putting aside for a moment the issue of creating a new playlist, what is the reason that all existing playlists disappear from the album view when Roon updates to a new build? This happens every time Roon updates, even if the playlist has not changed. The playlist will remain visible in the playlist section, however. Is this the intended Roon behavior, or a glitch?

Putting aside for a moment the issue of creating a new playlist, what is the reason that all existing playlists disappear from the album view when Roon updates to a new build?

In a previous build, we have moved this option to Roon Settings → General → Show Playlist Links. Can you please confirm that you have this setting toggled? 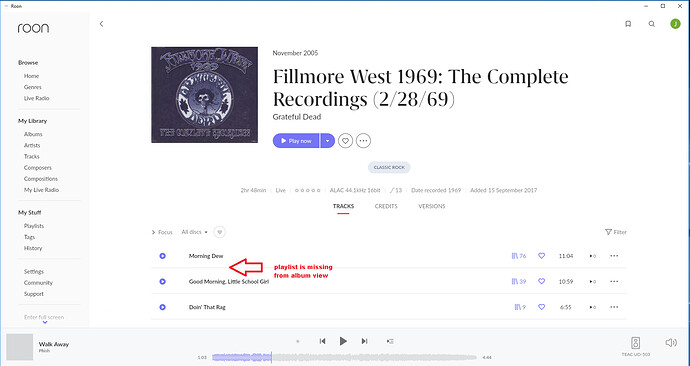 Here is a screenshot showing that Roon still recognizes the playlist, even though the links are missing from the album view: 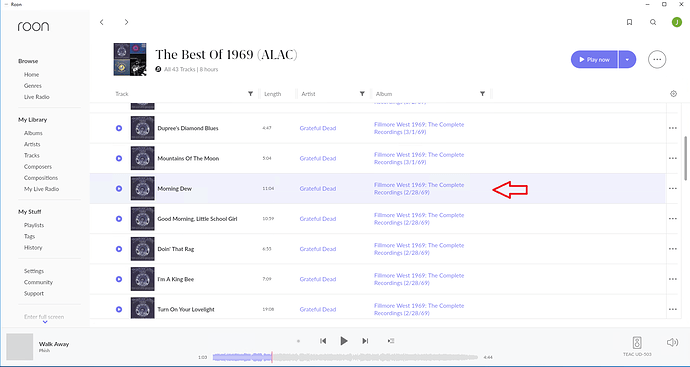 And here is a screenshot after I restored the playlist links by adding a track to the playlist, essentially “refreshing” the playlist so it will be recognized by Roon. That works every time, but is obviously quite tedious: 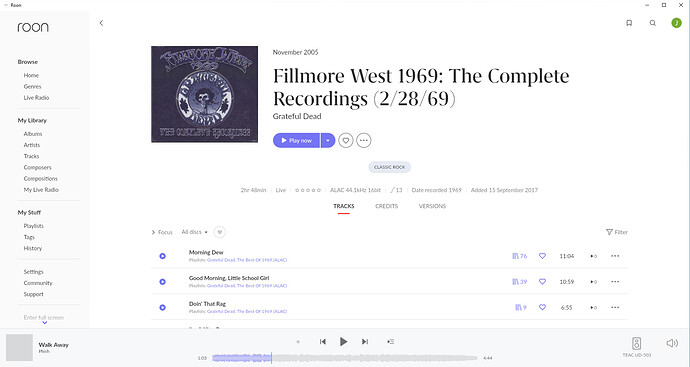