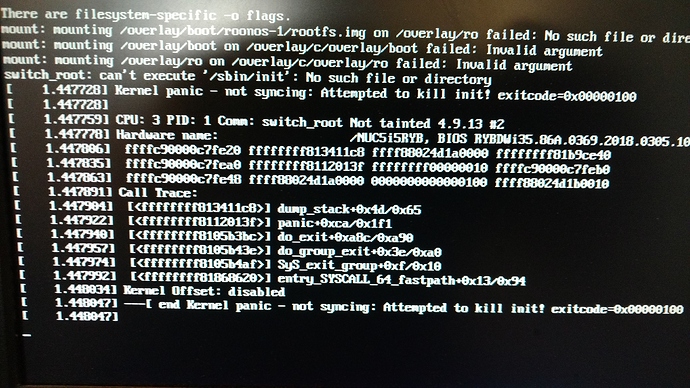 Hi @support I have a NUC 5i5RYH on which I was running ROCK using a 2.5" SATA III SSD but I decided to upgrade to an M.2 NMVE drive. I chose the m.2 drive from the Intel list of compatible hardware, with one qualification. It was the Corsair MP500 120 GB drive. (Technically, the 240 GB version, not 120 GB, was “Intel validated” for my NUC, but I didn’t need all that space.)
When I install ROCK, after rebooting I get the ‘kernel panic’ screen attached, which looks similar to that of other users who had a m.2 nvme drive problem in a NUC5i5 & 5i3 RYK.

My NUC5i5RYK reports a kernel panic rebooting after ROCK installation up until ‘RoonOS install is complete! Please Remove your USB installer and hit ENTER to reboot’. See the kernel panic screenshot below. As far as I know I have succesfully completed all steps prior to the kernel panic message: downloaded BIOS file (RY0366.bio) updated BIOS configured BIOS for ROCK downloaded ROCK (roonbox-linuxx64-nuc3-usb-factoryreset.img.gz) unzipped file (roonbox-linuxx64-nuc3-usb-factoryreset.img) form…


I confirmed the m.2 drive, not a corrupt installation file, was the problem by freshly reinstalling ROCK on my old 2.5" SSD successfully.
I thought using an intel-approved drive would be safe.
Other users seem to be resolving the issue by installing the slower SATA (as opposed to NVME) M.2 drives, which are on the Roon-recommended hardware list.
I have a few questions:
NVMe + 5th generation NUC causing kernel panic in ROCK install
Henry_McLeod (Henry) April 15, 2018, 12:01pm #2

There has been confusion in the past because there is documentation that states some gen 5 NUCs work with NVME drives. But I don’t think that has been verified step by step (what BIOS settings etc). But M2 SATA does work and there will be a bigger list of those tested.

I am using a gen 5 nuc with a nvme drive in it as my windows machine.

I am using a gen 5 nuc with a nvme drive in it as my windows machine.

Is your NVMe drive the boot drive? I’ve read conflicting information regarding whether a 5th Generation Intel can boot from NVMe or not.

@John_Webb Have you checked that you are running the latest BIOS for the NUC?

@wklie Good question. Yes I have. I installed the latest BIOS just before I reinstalled Room.

@Tony_Reimann Very interesting! Could I ask which model of NVME drive you’re using? I’d like to give the same one a try in my NUC.
I think an interesting question will be whether it will boot both Windows and ROCK.

It’s an Intel 600p series. I am using the 256gb version but I don’t think the size matters. My nuc is a 5i3 but again that shouldn’t matter.

@Tony_Reimann Thanks Tony. It’s cool how this forum can help sometimes.