Wow – I never knew about this view! I just happened to glance at this thread, and learned something incredibly useful. (And, very impressive about Roon). Thanks, @antonmb 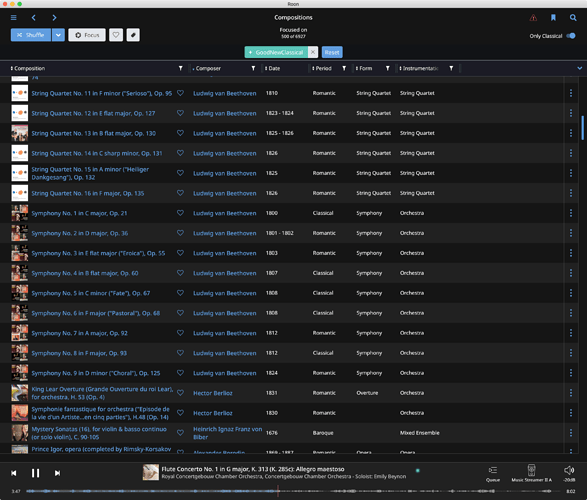 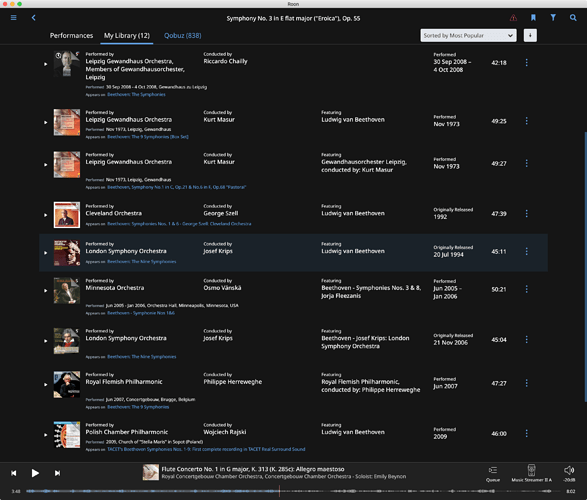 And @Mark_Sealey – I did very little to get my library into a state where this would work – I unfortunately have little patience for metadata editing. The one thing I did do was make sure that each album of mine is identified by Roon. (Perhaps easier to do with a classical library of a few hundred like mine – not sure how large your classical library is).

I have the same Mandelring set BTW, and it shows up organized in this view. (All I did was make sure those albums were identified by Roon when I added them). 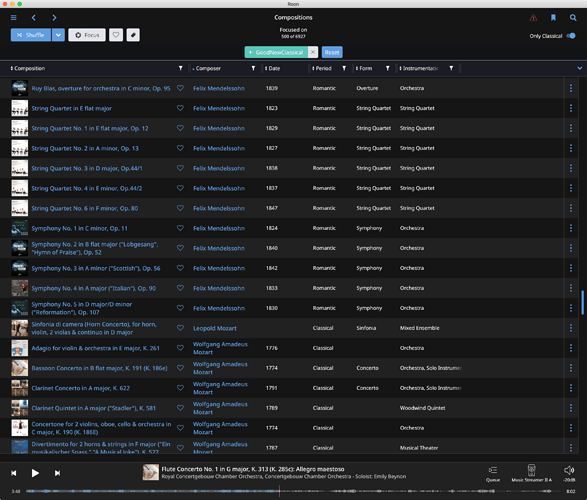 Haven’t read all of this thread, so not sure if that helps at all…

Thanks @otinkyad; it does help. I am getting an overwhelming sense that ‘all’ (!) one has to do is respect the form and format - and the arrangement of files - which come with each download and Roon does the rest.

(It still seems too good to be true, when set against classical music lovers’ experience of other online music data services.)

But thanks to Tony and the others here, it seems to be working as planned.

Great, glad that was somewhat useful. Interesting to hear that your experience with other classical data services was underwhelming. I’ve never tried them – had always just used iTunes until about a year ago). So I seem to have lucked out in stumbling into Roon’s classical music organization. (I’ve been just navigating by album covers – again, probably more feasible with a library of a few hundred).

BTW I just saw another thread of yours that mentioned Audirvana. I do have Audirvana, and found its organization to be such a nightmare that I quickly abdandoned it … I was probably doing something wrong. (As I said, I don’t have much patience with managaing metadata…

@otinkyad - Yes, I hear you loud and clear.

For a while I tried Jaikoz. Equally complex tagging solution. Its developer was extremely helpful and takes as many pains and as much time and trouble as Barry does with Yate.

Tagging is… well, tagging. I am meticulous with my photos… at first with Aperture, now Photos. It seems to make sense to have as many ways of getting at one’s data as possible.

As for what is supposed to be the best (organized) online resource (and I don’t want to be negative… I’m sure it works well for most music genres except ‘Classical’; I’ve learnt to be acceptingly sanguine about being in this minority

), this is what I get if I search on/for ‘mandelring mendelssohn chamber music’ for ‘Recording’: 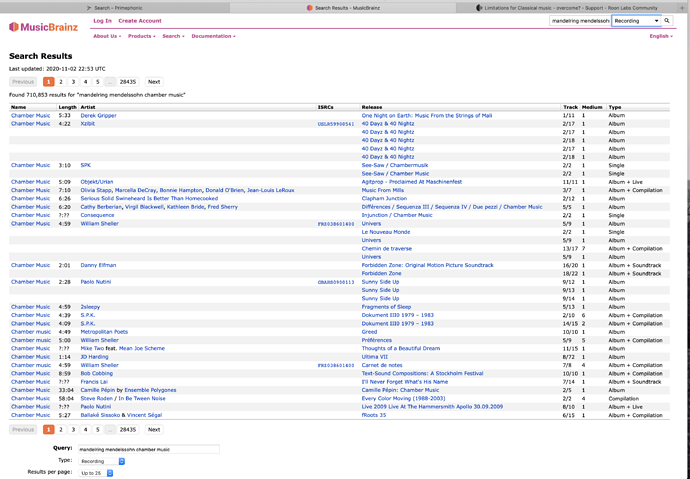 So to have, as you say, ‘stumbled’ across Roon is a huge bonus.

I’m going to investigate storage and Nucleus next

@Mark_Sealey Interesting about the other organization schemes.

BTW I have just gone the NUC route myself. (Nucleus is out of my budget. Also, I believe it locks you into a machine that cannot be used for anything else, whereas a NUC can be used for other things such as running Windows/Linux down the road).

After some bumps in the road (see UPDATED: Any experience with NUC10i7FNH + ROCK + Qobuz? [Was: Intel NUC + ROCK -- Qobuz won't work] if interested), I’m cautiously optimistic that it may give me a seamless “appliance” experience. (I haven’t yet updated that thread with my current optimism, because I’m still testing…

I see what you mean about exactly what you came across by chance. Yes, Roon is clearly exceptionally well thought out.

I’m still at the very early stages of thinking about extra hardware. For years I’ve stuck to having all but the most ephemeral data and files on my main Macintosh HD volume… if for no other reason than ease of backup, about which I’m fanatical: multiple clones as well as Time Machine (I’m Mac only).

So one criterion for external storage would have to be ability to clone it and keep copies offline - not because I couldn’t download the FLAC files again; but because they may well end up having had a lot of work applied to them with meta tagging. Although much less than I thought a couple of days ago - thanks to this thread.

I’d be grateful for that, please; especially if macOS compatible and able to be backed up. My FLAC files have quickly grown to take up over 250 GB of my 1TB drive. And some of my external storage devices have begun to tug at both elbows.

@Mark_Sealey – In your case it seems like it might make sense to work backwards from storage, as you want Mac-compatibility even if using NUC/Nucleus.

Given that you want to be able to manage metadata on the music files you feed Roon, that means your music storage has to be readable+writable by Mac. That means you have to use an external drive with a NUC/Nucleus (my understanding is that either machine will impose its own format on internal storage drives). [EDIT 1: I suppose you could maintain your reference copy of tagged music files on a Mac-accessible disk and keep syncing this over the network to a disk attached internally or externally to NUC/Nucleus. That could obviate the need for an external disk attached to the NUC/Nucleus].

IMO an external drive attached to a NUC/Nucleus has other advantages as well: it gives greatest flexibility for music storage (as compared with using an internal drive in a NUC/Nucleus). This is because you can move it around, attach to other machines if needed. The downside is the NUC/Nucleus now has a drive hanging off of it.

A Nucleus does allow Mac formats for an external drive (https://help.roonlabs.com/portal/en/kb/articles/nucleus-media-storage-and-audio-devices) whereas a NUC running ROCK only allows ExFat (https://help.roonlabs.com/portal/en/kb/articles/rock-storage-basics), which is a very space-inefficient format in my experience. But if you don’t need more than say 4-5 TB of space then ExFat’s inefficiency may not be a problem.

Per my understanding, you would be able to access any storage attached to a NUC/Nucleus as an smb:// share, and use Mac tools to back up.

[EDIT 2: Using a NAS could open up entirely different storage procedures, but I have no experience with using a NAS…]

@otinkyad - Thanks for that. Makes perfect sense.

I’m actually doubting that I need such an external device like this at all.

My ideal environment (at least at the moment) is to have the best player on my Mac:

In the future, though, I may want to go multi-room.

I may be wrong, but I am beginning to think that perhaps I just need good external storage.

Even a nuc might be overkill for what I want.

In the case of storage I need to be able to make backups and not have Roon slowed down if it’s getting its FLAC files from an attached volume… so SSD or 7200 rpm spindle?

Hi @Mark_Sealey - Late again I must stop this sleeping habit

Box sets can be a mixed blessing . The rule of thumb with Big Boxes is leave them alone.

Take for example Alfred Brendel the Complete Philips Recordings . In most cases the individual CD’s we “Released” as you see them in the set. BUT not all. Some have additional tracks added to the “original CD” take for example the Brahms Piano Concerto No.1 , it has The Ballades added to the original layout.

This is common with compilations especially where the original release was an LP and restricted to maybe 45-50 mins, so they pack the CD to 70-75 mins and now Roon cannot ID it as it was never released as such. There are many examples.

So splitting a Box into CD’s won’t normally work , there are of course exceptions as ever.

To give yourself (and Roon) the best shot just set each CD Folder to CD01, CD02 etc and import the Box as is . Chances are Roon will ID it

Roon is not good with Big Boxes !!! You have to navigate in other ways eg via the Composition View

As an aside , if you add anything after the CD01 eg CD01 - Brendel Plays Bach , then Roon will see that as an album , so CD59 - Some Music Name will be treated as a solo album , Roon will try to ID and likely fail.

He replies here normally quite quickly 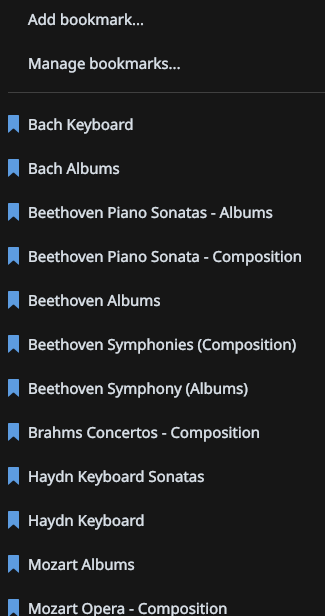 Thanks, Mike. Yes - you’re about nine hours ahead of us in California (although I’m from the UK).

Much appreciate your digest on big boxes. I doubt that I’ll be importing that many CDs My aim is to build up FLAC files.

But you never know. Now I’m hooked. Yes, Paul has helped me when I was using Jaikoz.

Am still discovering the hidden corners of Roon - like favourites.

I’m from the UK originally , Hyde in Cheshire , I’ve been here 25 Years

I suspect you weren’t doing anything wrong !! I mistakenly bought an Audirvana license I have never really got it to work properly also it too is a nightmare for Classical . Only having Artist and Album and not being able to differentiate Classical in any other way is just too limiting

As a very light uneducated classical listener this thread has been fascinating and educational. Thanks to @tripleCrotchet for the masterclass.

I concur. You live and learn, don’t you. One plan I thought of is to turn Audirvana into a dedicated iTunes (and its successor) player.

I’m from the other side of the Pennines… Leeds

@ged_hickman1 +1 for that. Thanks again to Tony!

As a very light uneducated classical listener this thread has been fascinating and educational. Thanks to @tripleCrotchet for the masterclass.

Yes, agree and thanks too to @Mike_O_Neill too for answering my question

Could I - as a new user - be forgiven for being so presumptuous as to suggest that the wisdom of those who’ve provided such helpful answers be turned into an FAQ somewhere?

I think I could contribute a set-by-step guide to the Yate side of things: that - I can now see - has to be placed firmly in the context of letting Roon do the (initial) work. Then how to set up and configure a Yate preset for Roon, why and how to use it, and how to avoid unnecessary work using tags - which wouldn’t work against how Roon does things.