Most channels now go smoothly, but the Dutch public channels as of today not. Transmission will start up normally, but after about 15 seconds it will stop with an error message. It concerns NPO RADIO 1, NPO RADIO 2 and so on to 5.

I’ve just played NPO 1 for 6 minutes without problems. Not definitive I agree, but my first thought is to suspect something with your setup.

Has anything changed recently?
…and have you rebooted is always a good question.

There are 4 streams for NPO Radio 2. I’ve played the first one, MP3 192kbps, for a few minutes without trouble.

I forgot to ask - do you get the same problem with all endpoints?

I rebooted my Nucleus but the problem remains. Only the NPO stations do not work properly, the others do, such as radio Paradise (flac). See the error message. I don’t think I have changed anything from yesterday, when all channels were still working.
But it’s even worse than I thought, because Qobuz doesn’t work neither anymore (internet connection would be too slow). Only my own music on harddisc do it well. I play with a Roon Nucleus (1 month old) and a Teac NT-505 (streamer-dac). Everything works fine with the Teac streamer, Qobuz then streams everything in the highest resolution.
I also tried it through my Sonos speaker, and it no longer plays anything with Roon, but it does play well with the Sonos software. So could the core in the Nucleus be the problem?

And can you post a screenshot of your WebUI?

Both play well, no problems. 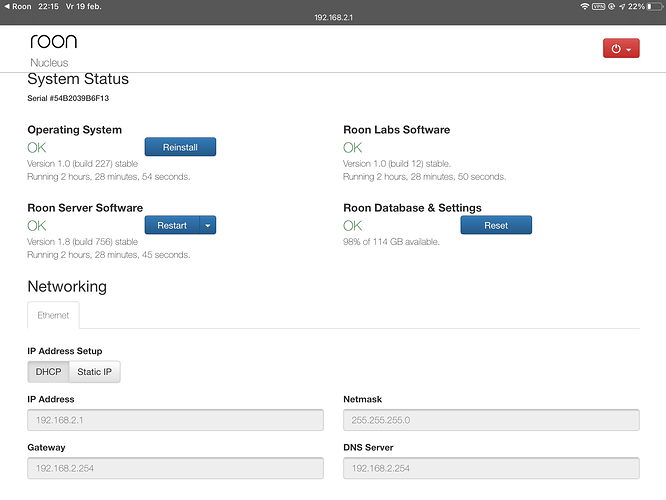 Hello @Sjaak_Deen , I’ve moved your thread to #support:nucleus-support . The experts will be along soon. In the meantime, can you please provide a brief description of your current setup using this link as a guide.

Make sure to describe your network configuration/topology, including any networking hardware

Here are the details of my problems and setup.

THE ISSUE (all worked fine till yesterday):
1.Some local public radiostations don’t work. Transmission will start up normally, but after about 15 seconds it will stop with an error message. It concerns NPO RADIO 1, NPO RADIO 2 and so on to 5.
2. Qobuz tracks don’t play anymore (internet connection would be too slow). Only my own music on harddisc do it well. My Teac streamer-dac plays every Qobuz-track flawlessly.
3.The same problems occur when I stream from Roon to a Sonos speaker.

The problems are still there 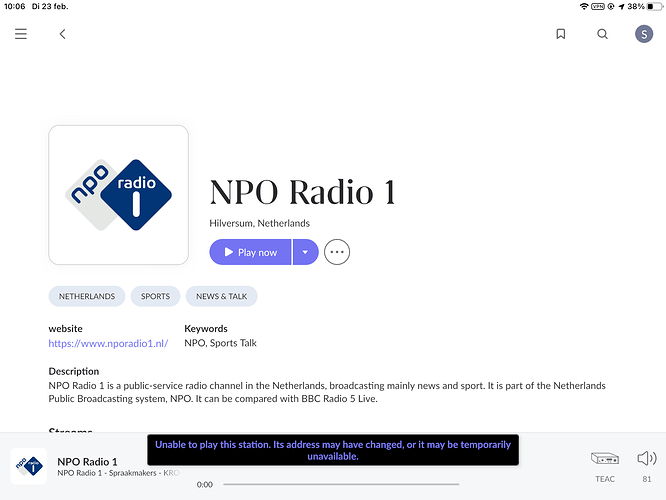 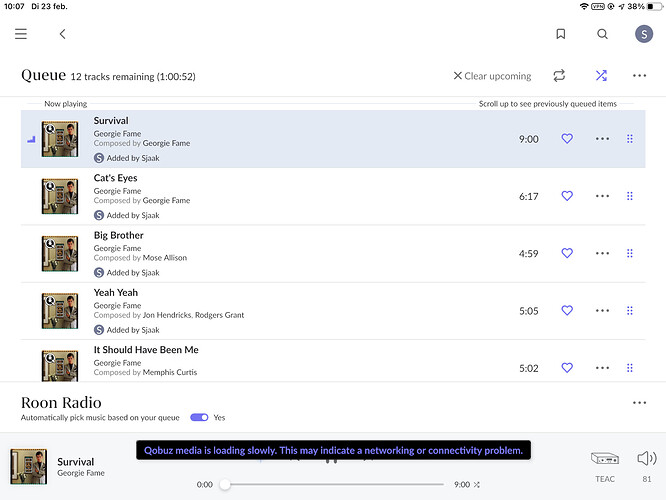 I am still waiting for a solution to my problem with my almost new Nucleus: Qobuz no longer works and the public Dutch channels (see previous post) only work for a very short time, 10 to 15 seconds. Could the device be faulty?

Qobuz: the artist and album information will appear, but tracks will only be played for a few seconds. This problem has arisen overnight, along with the radio problem. I bought the Nucleus because of the promised plug and play functionality, and in the beginning everything went fine, but now it seems more plug and pray! I want to be busy with music and not with software or network hassle.
I also tried the Nucleus at my brother’s house (with faster internet connection), but then the problems get much worse. Continuous outage due to “no connection possible” and a few moments later connection again. Totally unworkable, even with my own library. Operation with iPad or Android smartphone made no difference, just like at home.
It irritates me immensely, I especially regret this luxury “convenience” purchase.

I’m waiting now for almost 2 weeks. Please can anyone help me ??

I’ll ping @support for you again @Sjaak_Deen. I know they have been particularly busy after the 1.8 rollout.

Apologies for the delays in getting back to you here, our queues have been longer than expected due to our recent 1.8 release.

Can I please ask that you reproduce the issue, note the exact local time + date of the failure and then use these instructions to send a log set from your Nucleus Core for review?

You can also try to perform an OS reinstall via the WebUI, that may help:

SUMMARY OF MY PROBLEMS:
The problems with the setup at my house:
1- Qobuz suddenly stopped playing, a track plays for a maximum of 10 seconds and then it stops. Only my own music on hard drive works well. My Teac streamer-dac (also bought from you) plays every Qobuz song flawlessly. The same problems occur when I stream from Nucleus to other endpoints.

2- The Dutch public radio stations do not work. The streaming will start normally, but will stop after about 15 seconds with an error message. It concerns NPO RADIO 1, NPO RADIO 2 and so on to 5. Other stations seem to work, including Radio Paradise (FLAC).

The problems occur with all remotes.
Software is up to date.

2nd SETUP
I also tried the Nucleus at my brother’s house (with a faster internet connection, with my iPad, my android phone and a Denon CEOL as endpoints, but then it really becomes a drama. Constant downtime due to “no connection possible” and a little later anyway connection again. It’s always on-off-on-off. And often the core is not even found. Totally unworkable, even with my own library on the USB disk. The operation with iPad or Android smartphone made no difference, just like at home.

I reported the HOME issues on Feb 18. The exact date and time when these arose are no longer known to me, probably one or two days earlier. The update 1.8 had already been installed a few days before the issues. In any case, the situation was that in the evening everything was still working fine, and problems arose the next morning. In the meantime, nothing has changed in the setup.

I followed your advice to reinstall the operating system, unfortunately the problems are still there.

I have made a zip file of the log file too. Am I supposed to place the link on this site, or do I have to send an email with the link?

You will find the log files here. Is this done correctly?

It has now been more than 3 weeks since I presented the problem with my new Nucleus and I have not made any further progress. I think the device is just broken. If you share this opinion, I would like to hear from you so that I can return the device to the importer, even if this is a hassle.
I thought I would buy a device with great ease of use and ultimate music experience. Well, the sound quality is fantastic, but otherwise I am only confronted with persistent problems and insufficient support.
So, can you please tell me if there is a software problem, or that maybe the device is broken (and should be returned to the importer)?

Is’s longer than one month ago that I asked you for help.
The Nucleus cost me € 1600, and I have played about one month with much pleasure before the issues came around. I can’t say anything other than that the much-vaunted Roon support is very disappointing.

I spoke with the team about this, and we’d like to enable some diagnostics on your device so we can take a closer look — Can you reproduce the issue once more and let us know the time that the error occurs as well as the track that you try to play? We’ll enable diagnostics and take a look at this specific instance and will get an idea of what we need to do next.