Ok, here’s a weird one. I’m playing some Tidal albums and noticed the ones that have a yellow dot, indicating a Low Quality Signal Chain are only playing half the songs. What I mean is it will start playing a song and it will get EXACTLY half way through and then skip to the next song in the album.

Spooky! Can anyone else verify on their system?

Hey guys, thanks for the report.

Can you guys let me know what type of Tidal account you have, and for what region? And @Greg, what platform you’re on, Windows or OSX.

Also, can you both confirm this only happens with Tidal (as opposed to local files)?

Finally, if you guys have more than one audio output, can you confirm it happens with all outputs? Meaning, if this happens with your DAC in Exclusive Mode, does it also happen playing to your System Output?

Thanks guys – we’ll look into this as well, and I’m sure we can figure this out once we have a little more information.

Hi @mike. Here are the answers to your questions.

This issues seems to only occur through Tidal. Any remaining mp3’s that I own seem to play fine. The albums also play fine when I use the Tidal iPad app.

These are albums that, previous to v1.1, would show as an up conversion in the signal path. i.e. 22.05 to 44.1. I would also previously get a crackling sound in these songs (I posted this issue a while back). There is no crackling in v1.1.

I can confirm that it happens with system output and to my Sooloos MC200 endpoint.

@mike, found something else strange. I’m listening to Joe Bonamassa - Had to Cry Today and all songs quit at halfway point except song 4 - Reconsider Baby.

The only obvious difference with that song is that it has 2 performances. The other is on Eric Clapton - From the Cradle.

Must be something else with the Bonamassa song.

Hi Mike, I am going to try to help… but the issue has not happened systematically. When Greg pointed it out I realised that it had happened to me as well and I joined the thread, but I do not remember which albums.

I can tell you for sure that it happened with Roon 1.1 (and never before) and only with TIDAL streams. If I am not wrong when it happened, it happened with both the Oppo HA-1 and the Kingrex DACs. I use the CoreAudio Exclusive mode in my system.

What do you mean with “type of TIDAL account”? I am not aware of different types offered apart from Trial and Subscribed. I am subscribed to it, as to the region… it is Italy.

Hi @simoneratti, I’m not sure about Italy, but there is Tidal Premium, which is lower quality and Tidal Hifi which streams at cd quality. It cost twice that of Premium.

Of course, the situation we are having here are albums streaming lower quality, regardless of your a Tidal subscription.

Thanks for the explanation. It is Tidal Hifi for me as well.

Hello, I have an update. Looking down my old playlists I found one of the albums affected by the issue and I reproduced it on my system. The album is dEUS’s “Following Sea” whose source is low quality AAC 44.1/16/2. I played it on both the Kingrex DAC and the Oppo HA-1 DAC via CoreAudio Exclusive Mode and on both chains each song stops at about half the playback moving to the next in the list.

I can say it is easily reproducible and I confirm it is happening on a low quality stream.

I add that the issue is not happening when I stream directly from TIDAL website.

Me too,having similar problems,down loaded the poison girls complete catalog and apart from the bit rate not locking or DSD not working,now as you describe it only plays part of the track,I’m using a PS AUDIO Direct stream DAC,any help would be appreciated!
Fox Delaney

I used to have a similar issue on Sooloos with mono-encoded tracks. If I re-encoded them to stereo they’d play properly.

I’ve not tested any mono tracks on Roon yet.

I had the exact same thing happened the other day and didn’t know what was going on.

A.A. Bondy’s When the Devil’s Loose encoded in AAC only plays half a song before moving on to the next song. Tidal FLAC, local FLAC, ALAC and AAC play fine.

This happens on all outputs.

I’ve had cut offs as well, but with my own library. Two albums in particular, which happen to be in mono and 320k will consistently advance to the next track 10-15 seconds before the current track is completed. Had others as well, but these I’ve confirmed.

Hi @mike, just checking to see if you’ve got the info you need to investigate this.

Hey guys, and thanks for checking in @Greg – we spent some time trying to reproduce this today, without much success.

I’m going to spend some more time on it tomorrow, and will report back if I need some more information. I’m sure once we have clear steps for reproducing it will be straightforward, but unfortunately I’m having some issues with the Canadian Tidal account, which seems to be a common thread.

I’m working on it guys, so let me know if this situation changes, and otherwise I’ll let you know when I have some news. Stand by!

Each song is skipping to the next at exactly the half way point. 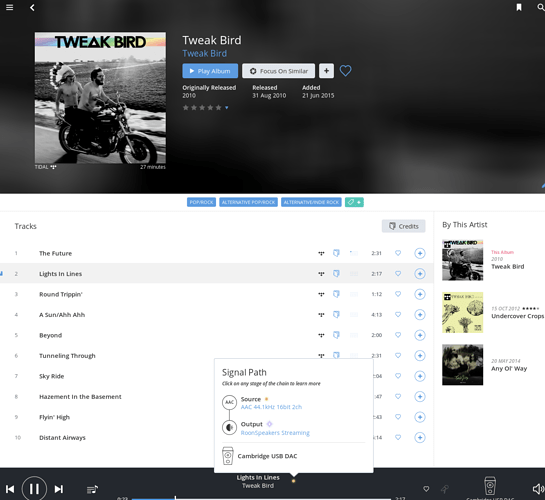 Thanks @mike. It may be more than just Canada, although that seems to be the majority. There’s an Italy and USA Tidal accounts as indicated above.

Here in Australia as well. Harry Manx CD’s streaming from Tidal as AAC 44.1 16 bit 2 ch stop mid track. Both on core and remote and both airplay streaming and roon speaker streaming. OS Yosemite.