That is correct. The first unfold decodes the corrections for the original ADC and upsamples to two times the original sample rate. The second stage in an MQA DAC would do the rest but as your DAC is not MQA capable you just get the first unfold.

Can you or anybody else explain me what MQA does to a 24/44.1kHz master as e.g. the new Billy Gibbons album? Deteriorating the original, adding noise that is not in the original, do nothing, or simply up-sample and try to reconstruct what has been cut-off in bit-depth due to the MQA encoding process?

Might be a good idea, if you haven’t already, to just play it in MQA and listen. Twice recently SWMBO got up and danced around the room to Billy Gibbons on her way to make a cup of tea. Yes it was on in MQA in the kitchen too.
My question is, what else does Modern Blues music and MQA have to achieve with regard to a non blues lover?
Curious…

I have a similar question to the OP, am entirely new to MQA. I’ve noticed that I get quite a variety of fully decoded frequencies according to the signal path for my uncertified Roon Ready Vitus MQA streamer, and I’ve been curious to see that on occasion, the full decoder frequency is as low as 44.1 or 48 (per the first screenshot). Playing the same file to my non-MQA Linn streamers reports 96khz. But per the second screenshot, I sometimes get an MQA reported decode frequency that is higher (max I’ve seen so far is 352.8 on a test file).

So I guess I’m just checking whether all this is exactly as it should be? 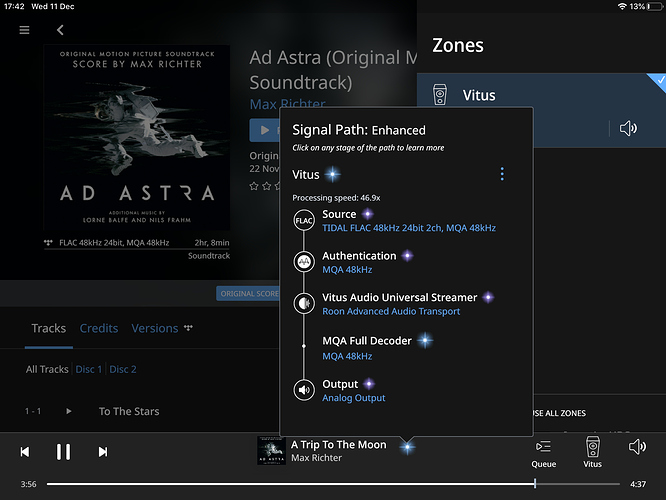 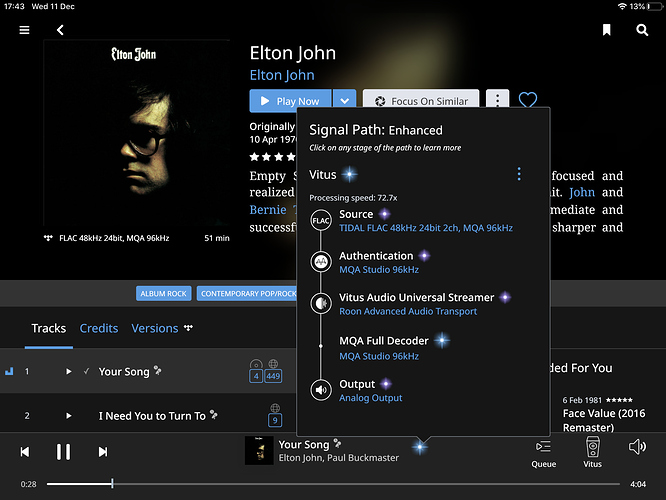 the full decoder frequency is as low as 44.1 or 48 (per the first screenshot). Playing the same file to my non-MQA Linn streamers reports 96khz.

This all depends on the endpoint and how you have Roon set to process/not-process MQA. If the Vitus can do the full MQA decode/render, and you have it set that way. Then Roon will send the stream untouched to the Vitus (which would be a 48kHz file and the Vitus will do all the processing. As you can see MQA Full Decoder: Roon is displaying what the vitus is telling Roon it is doing.

In the case of the Linn, you probably have told Roon that Linn has no MQA ability and have activated MQA in Roon. In this case, Roon is doing the first unfold and sending that to the Linn, which would be 96.

Thx. My theory for now is that some albums might be mastered as low as 44.1 or 48khz and hence the full decode on the MQA DAC will report that? However sending the same content to a non-MQA DAC with Roon MQA decode delivers a nominal 96khz stream, but that does not mean it’s superior to the full MQA equivalent? For material mastered at higher frequencies, it’s not so confusing (if my deduction is correct).

MQA DAC reports the master sample rate, not the playback sample rate, that’s why it’s 48kHz for MQA 48kHz music. It does not imply it is played at 48kHz. MQA DAC always renders the MQA music in a MQA-certified manner to get the best possible output.

Non-MQA DAC reports the MQA Core decoded by Roon, which is the playback sample rate, so it’s 96kHz.

There are also MQA masters that are natively 44.1 or 48 masters and are not higher resolution. What you will find is that the core MQA decoder which is on Roon or used in other software will always output to 88.2 or 96 it’s coded that way. If it’s going on to an MQA DAC then this gets processed at the rate it was mastered at, so if it’s higher it will go to 192 etc if not then the MQA rendering stage will output it at what it is 44.1 or 48 and apply all the final filters and mqa gubbins. If not going to an MQA DAC then your getting essentially an upscaled output with the first layer of MQA gubbins. The only way to stop it is to turn off mqa core decoding. Roon has said it’s the design off the core decoder to do this and they can’t change it.

That’s incorrect. It gets processed according to the rendering implementation in the DAC. So, say if you have an MQA encoding of a 44.1k master and an MQA-certified 384k DAC, it will be unfolded to “MQA Core” at 88.2k, then (probably) up-sampled to 352.8k in the DAC prior to the actual D/A stage. As part of this DAC-specific rendering, it will have a certain filter (or filters) applied as part of the DAC-side of the MQA process. It’s probably actually a combined filter in the DAC.

Not sure how your description differs from what I said. I have many mqa from Tidal that only render at 44.1k in my MQA DAC as the master or I guess terminology would be authenticated, Roon Core decode unfolds to 88.2 , my DAC renders output as 44.1. I have others that are encoded at 44.1 and render at 352.8 in my MQA DAC.

I have many mqa from Tidal that only render at 44.1k

I’m pretty sure your DAC just reports the original (master) sampling rate, which has nothing to do with what the DAC actually renders at.

Well it changes dependant on what Roon says it’s mastered at. So if Roon is reporting it’s an MQA 44.1 mastered at 352.8 in the Tidal UI then it will render at that Res. If it’s a 44.1 mastered at 44.1 it renders at 44.1 so your saying that the DAC is doing something else?

There are four different rates here, which causes no end of confusion:

I’m just reporting what I am seeing and what Roons telling me.

Thanks Joel for the explanation. I can appreciate now how the mastered rate does not equal the rendering rate. Would a fair analogy be an oversampling CD player?

Would a fair analogy be an oversampling CD player?

I guess so. Removing MQA from the picture entirely, it’s a 16/44.1 input for all CD players, but CD players implement things (i.e. their DAC including any up-sampling) differently. There are “infinite” ways to render the audio.