I’m trying to play Multi-channel DSD files ripped from SACDs with my AVR Pioneer SC-LX90 natively from Nucleus HDMI output. By selecting “Convert PCM” from DSD Playback Strategy, it converts and plays 5.1 DSD files as 88.2khz 32bit 5.1 PCM files. However I cannot find the way to play DSD files natively without converting to PCM. “DoP” and “Initial dCS method” don’t work. When I connect my Esoteric SACD player to SC-LX90 via iLink, it recognizes Multi-channel DSD without converting to PCM.
I’m playing 2ch DSD files from Nucleus with W4S DAC connected by USB without any issue.
Any clue?

@Masato_Hashi Did you adjust your settings in the audio tab for the Pioneer to play back DSD natively? See photo. If Native is not available, perhaps you need to scroll down to access it. Or perhaps you may need to update the Pioneer firmware in order for this to be accessed. Just a few thoughts… 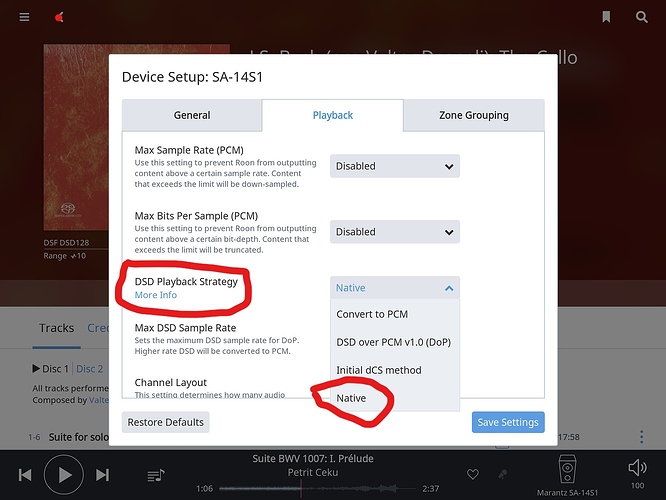 Hi Michael
Thank you for your advise.
My device Setup looks differently from yours and I don’t have “Native” in scroll down menu. And it is for Nucleus rather than Pioneer AVR. 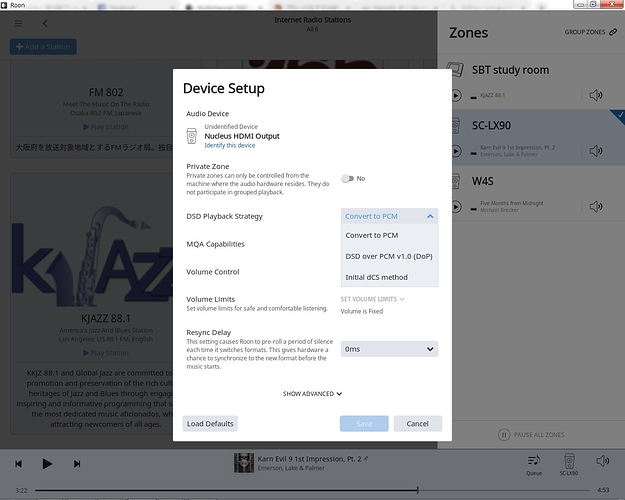 My mistake! I thought Pioneer might be Roon Ready.

It is not possible to play DSD files over HDMI to devices that do not support DoP DSD signaling. This is not a limitation of Roon, to my knowledge only licensed Blu-Ray and SACD transports are capable of native DSD transmission over HDMI.

Hi John, thank you for your advise. It sounds like we have to stick to disc drive based player as far as we want to listen to multi channel DSD files. Or is Roon ready and Blu-Ray/SACD certified disc-less transport that can handle multi channel DSD files available anywhere?
And it sounds strange limitation because we can play 2ch DSD files over unprotected USB output.

Roon is perfectly happy to play multichannel DSD over USB: in fact, I’m listening to that as I type this. The problem is HDMI — there are no open source DSD over HDMI audio drivers for Linux that I’m aware of, nor are there any such drivers for MS Windows nor macOS. The only Roon-ready device (that doesn’t also play discs) I’m aware of that outputs DSD over HDMI is the Bryston BDP-3, and that’s limited to stereo per my inquiry to Bryston last fall. One might note that many universal disc players (e.g. Oppo 103/105 at least, Pioneer Elite BDP-80) run Linux internally, but the HDMI audio driver doesn’t appear to be publicly available, and is likely tightly tied to the MediaTek system-on-a-chip (SoC) that those players use. When one googles Linux HDMI DSD, one finds that several folks have looked into this, but nothing has ever been developed due to a combination of technical (I’m not clear), legal (possible patents), and political issues.

The other (alas even more expensive than the Merging products) Roon-ready multichannel pre-pro I know of is the Trinnov Altitude series, but I don’t know about its DSD capabilities…

If your receiver/pre-pro will accept multichannel DSD over Ethernet via the DLNA/UPnP protocol, you might see if it’s possible to make the Logitech Media Server (LMS) UPnP bridge plug in work. I would expect this would be tedious to configure, but might be your only choice without buying new equipment. Note that are often weird limitations in these capabilities; if I remember right, my Marantz 8802A will accept stereo, but not multichannel, DSD over Ethernet. Sigh.

Would you mind sharing more information about your system components? I see you are able to adjust your Marantz CD player’s settings from within the Roon app. This is a bit confusing to me. How is this done since the SA-14S1 is not Roon Ready.

The trick is to use a recent Oppo disc player with HDMI in and out as a bridge between Roon and the DSD-capable HDMI input on you AVR.

Hi, I do not have the Marantz device. I think I pulled the screen shot from this link.

Thanks for the quick reply

It seems like you have some experience with what I am thinking about doing.

I have a NADAC 8 and have been attempting to play high resolution sound (Native DSD, DSD 256 or 512), but have recently realized that my current server is not up to the task (i.e., it has insufficient processing speed at the higher settings).

I am beginning to consider options for a new server and have heard good things about the Nucleus +. However, I am unable to locate any information about how well it plays these DSD resolutions.

It seems that you have that have accomplished this. I would like to know about your experience with the Nucleus with high resolution DSD.

I am beginning to consider options for a new server and have heard good things about the Nucleus +. However, I am unable to locate any information about how well it plays these DSD resolutions.

I have had some experience with the Nucleus+ in this regard: https://www.stereophile.com/content/music-round-96-roon-dolby-atmos

Thanks for the link. I would say you “have had some experience with the Nucleus+ in this regard.”

I appreciate your interest and am very grateful for what you have contributed to the multi-channel listening community.

Have you had “some experience” with the Red Wolf 2? It seems like a very good, higher end alternative to the Nucleus (at a “higher end” price).

Not the Red Wolf but I was pretty impressed with the Alpha 3: https://www.stereophile.com/content/music-round-95-wolf-nad

Thank you for the link. Again, I am very impressed with your writing.

The Alpha 3 now has an upgraded version, Alpha 3 SX. It seems like a very good piece of equipment.

The Red Wolf 2 is a lot like the Alpha 3 SX, with the main exception being the external linear power supply and the shielding/case prep. Although there will probably be a RW2 SX at some point, the Alpha 3 or Alpha 3 SX seems like a good choice.

Are there other servers that stand out for multi-channel DSP?

Are there other servers that stand out for multi-channel DSP?

None that I have my hands on. DIY is next for me.

I suspected as much. Thanks for providing your impression.

I had some experience building my own computers decades ago and, three years ago, I found a computer person who had a great deal of compassion for audio.

As our project progressed, it became apparent that he was not as forward-thinking as I was. He had preferences that I later learned were a bit self-serving (e.g. the operating system he selected was one he owned a number of licenses for rather than were the best ones for what I wanted).

There was a lot of exchanges and I ended up with a server that I have been happy with. I took some regrettable “financial short-cuts” as well. A couple of them I have come to regret.

As I got more interested in high res, Native/DSD quality music, I started to notice some of the limitations built into the machine. I have learned and realized a lot from this experience.

At this point, I think I know what some of the future parameters of servers might be. I have a general idea of what my upward limitations (in terms of ability to appreciate the finer points of quality) might be. I think the upgradeability path is for me.

I hope you write about your adventures in DIY. I am sure I would enjoy reading them. Perhaps the DIY scenario is a bit more audio-friendly than it was.

John -
I use a Microsoft Surface Pro, i5 version, (it’s fanless, so not that fast) to run my Roon core, not a Nucleus. Playing music isn’t that CPU intensive unless you’re upsampling or doing other DSP manipulation. Moving close to 70 Mbit/s (6ch DSD256) of time sensitive data could be somewhat of a network stress, however. I believe your fine DAC is Ethernet attached, yes? Are you running 100 megabit or gigabit Ethernet?

Moving close to 70 Mbit/s (6ch DSD256) of time sensitive data could be somewhat of a network stress, however. I believe your fine DAC is Ethernet attached, yes? Are you running 100 megabit or gigabit Ethernet?

I don’t know why anyone would not be using 1G (or more) networking these days.