"No Audio Devices Found" on my Android

I’m new to roon starting from today, and no luck for playing sound so far.

I installed all-in-one roon software on my iMac and decided to use iMac for core and to play music on my Sony Z3 android phone. I installed the roon remote on Z3 and successfully connect the iMac.

I can browser and control and click play of my music, however no sound output from my phone, the app shown “No Audio Devices Found”, so how can I setup my android phone as the output?

Hope someone may help, thanks. 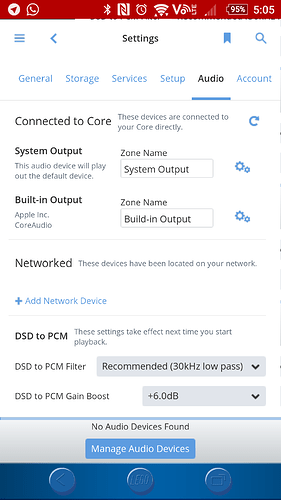 Hi Nick,
Just to let you know I’ve seen your post and am watching this thread. I don’t know enough about Android to assist myself, but if it’s not resolved with assistance from other users by tomorrow morning (my time in Melbourne Australia) I’ll shift it into Support and flag some devs.

I understand the screenshot is from your Android phone. Do you know what CPU and version of Android it has ?

I would have expected to see another section in that screen - Connected to this Computer.

Thanks very much.
My phone use Snapdragon 801 2.5GHz CPU, and use latest Android 6.0.1 Marshmallow.

Seems I finally found out what cause the issue, I test my phone as roon remote today via cellular network, I’ve setup the router port forwarding as knowledge base insturction:
port 9003 UDP, port 9100-9200 TCP to my iMac

It works for connection and control as the screenshot shown, but in this situation roon core cannot detect the phone as output, until I connect all of them within same wifi network then core can discover Z3 as output and it sound well.

That somehow shifted my problem:
How can I config the phone as output even when using cellular network? Since the hardware and network connection is fine, may be I need more port forward to make it work?

That somehow shifted my problem: How can I config the phone as output even when using cellular network? Since the hardware and network connection is fine, may be I need more port forward to make it work?

This issue has popped up with computers offsite using the port forwarding method as well. I have to believe the core somehow does network discovery of all roon endpoints. The roon core will have no way of knowing your endpoint is out there in the great world wide internet when outside of the network. The port forward is in place for something to communicate into your home network, it doesn’t create persistent route for the core to discover endpoints in the other direction.

VPN would be a better solution over port forwarding in this case.

At the moment Roon requires that all components (Core, Control, Output) be on the same LAN.

@brian mentioned some of the issues arising from port forwarding in this post.

The devs have indicated that distant access is on the roadmap and the proposed solution is unlikely to require a VPN.

Also, be sure that when you are on the Audio tab in the settings that you have scrolled the screen all the way to the top. For some reason, it sometimes comes up showing only the bottom of the screen. The device (Phone) settings are at the top, and called “Default Output.” Once you configure that how you want it, play some music, and at the bottom of the playing screen, on the right is a speaker icon. If you tap that, it shows where the audio output is going to. If it isn’t the default, just tap the blue bar, and you can then switch the final output location.