Wonderful!
I’m interested in your system because I too have a Peachtree Nova (the 150), which I’m feeding by USB and other inputs. So far, I’ve had a hard time hearing significant differences among most DSP configurations for the Nova. It’s as if the amp stamps its own sound signature on almost anything it gets. (Or maybe it’s my ears doing that.)

I’ve been using a Nova 300 for almost 2 years at the moment. And have multiple feeds and DACs attached. I’d be happy to chat about what I’ve found with the amp.

One interesting thing to note, is that with a Windows PC and the Peachtree ASIO driver, I get native DSD 256. At least I found it interesting; since their marketing materials only stated DSD 128. When I called their tech dept to discuss, it was because “that is what you’d get with Mac OS” and they didn’t want to confuse users or have the support hassle of explaining why you need Windows to get the Native DSD rate.

I’ve never plugged one up to a Nucleus. I’d be very interested if it can reach native DSD 256 that way. (Or maybe Noris would know?).

Interesting.
Daniel, I wonder if you’ve noticed significant differences in SQ due to upstream DSP (such as Roon/HQPlayer filters, upsampling, USB decrapifiers, etc.). If so, where have you gotten the biggest bang for your buck, upstream from the Nova?

I’ve moved this discussion out of the support thread and into it’s own thread in Audio Products.

Just to let you know my setup,

I can switch and compare feeds pretty easily.

I do not use any “usb decrapifiers”
When using Roon not HQPlayer, the main DSP employed depends on the DAC, but, is still only some form of upsampling.

I’m not sure I’d go so far as saying one is way better than the other. The Nova’s use an ESS DAC chip which I’m not really fond of its sonic signature.

For DSD playback, I use Roon and upsample to DSD 256 and leave PCM as PCM. If I want to upsample PCM to DSD, I use HQPlayer.

Do you think you could identify each signal path correctly, most of the time, in a blind test? (Assuming volume is leveled). Or is the Nova presenting very similar sound output, regardless?

Well, Yes as far as my setup, but probably not what you are trying to get too. As an amp, I think the NOVA has a very powerful and clean output with little coloration.

Well, I’m still not certain myself where I’m trying to get to!

But right now, today, I’d like to optimize 2 or 3 different signal paths, each for a different use case:

#3 is the main focus. I ordered an ultraRendu and am eager to hear if it makes much difference for the USB signal (with/without HQPlayer or Roon DSP).

I’m using a Nova 150 with the basic Nucleus. I started playing through a Modi Multibit, then switched to the internal DAC in the Nova. I actually liked the Nova’s DAC better so I moved the Modi to my office setup. It’s a nice, simple setup and works well with my Tekton Lore’s.

I wonder what happens if you connect an iOS device to the Nova’s USB-A, but with a Dragonfly Cobalt inline. That has the ESS Sabre ES9038Q2M. Are you sure to hear the Dragonfly? Or does the Nova’s own ESS chip take over? In other words, what does the Nova do with an analog signal from another DAC? Is there an analog-to-digital process in there? Or does it just pass the analog signal straight into the power amp section?

If you go on analog it stays analog.

The specified USB port for iOS sounds good because they built a circuitry to take care of USB crap from the phone.

^^ Not according to @amg here:

Hi, Anyone out there have experience with a Nucleus directly usb’ed to a Peachtree Nova 150/300 amp, ie, a 2 box setup. Any linux compatability issues etc. Could an external dac be introduced between the two if wanted in the future without issues, eg a Chord Qutest or Mytek Brooklyn? Thanks in advance James


(Since the Nova (I think) converts analog inputs to digital internally, there’s probably not much reason to use an external DAC.)

I don’t know what the poster’s information source might have been.

4tb. external hard drive usb’ed to nucleus.(if that’s what you meant).
I’ve been using the nucleus/nova 300 combo. now for well over a year and apart from needing to soft reboot the nucleus occasionally when the remote can’t find the core, I’ve been very happy. Apart from main listening zone(Goldenear Triton 5 speakers), I airplay to a naim Muso in one part of the house and chromecast to an HRT Stage system in another.

@James_O_Brien
Can the Nucleus play to the 300 in native DSD 256? I can with Windows and the Peachtree Driver.

I hooked up an ultraRendu to my Nova 150 today.
I thought maybe this would give me a way to get past DSD128, but that does not seem to be the case. I’ve tried the UR in both Roon Ready and NAA (with the HQ Player trial) modes in Roon.

The UR does sound good with the Peachtree.

Very interesting feed and I’m learning quite a lot from your discussions. I’m new to the world of serious digital listening, thus my purchase of the Peachtree and Nucleus. I’m pleased so far but am interested in the fine tuning of this set-up. Not interested in purchasing anything else at the moment, but any suggestions on where to begin would be greatly appreciated. I’m running the nova300 through a pair of Focal Aria 948s and am primarily streaming from Qobuz.

I tried to play DSD 256 from Audirvana on my Mac Mini via an ultraRendu (in MDP/DLNA mode) to the Nova150 yesterday. I only got pops/stutters. But Audirvana at DSD 128 does sound great (and the license is cheaper than HQPlayer’s).

When MQPlayer is the selected zone in Roon, then in the DSP settings, the DSD sample rate options go all the way up to DSD 512. I don’t know if this has anything to do with what the Nova is reporting. If DSD 512 is selected, playback stutters. But if DSD 256 is selected, we do get playback. However, although the Roon signal path shows Sample Rate Conversion to DSD 256, HQP converts it back down to DSD 128 (even though the Bit Rate is set at 48K x 512)

I wonder where exactly is the limitation? 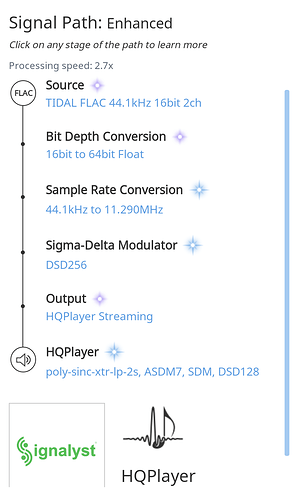 I wonder where exactly is the limitation?

From the Nova150 website (also mentioned in the manual):

Yes, that’s what Peachtree’s literature says. But upthread, it already was established that the Nova300 (which uses the same DAC chip as the 150) can play DSD 256. So the limitation seems to be somewhere on the Macintosh side (although at least one DAC line, exaSound, apparently has a driver to work around it.)

upthread, it already was established that the Nova300 (which uses the same DAC chip as the 150) can play DSD 256.

When you go to DAC diagnostics on the Rendu, can you share a screenshot of what you see?