I get not all Recordings for a Composition Displayed when I use Recordings View.

In Album View, all Albums which contains the same Composition are displayed. 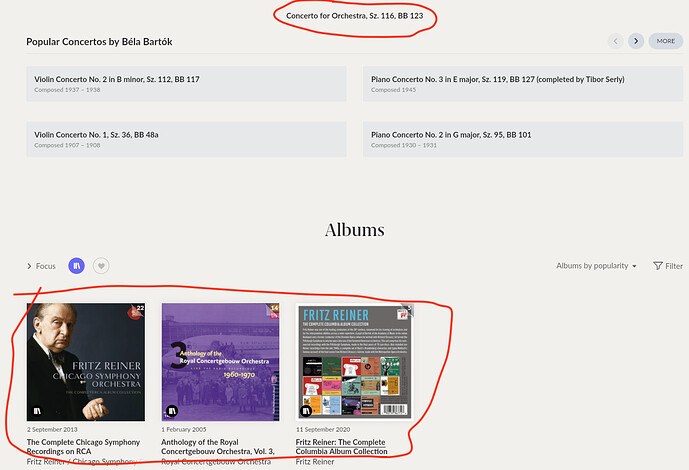 But if I switch to Recording View only one Recording is displayed. 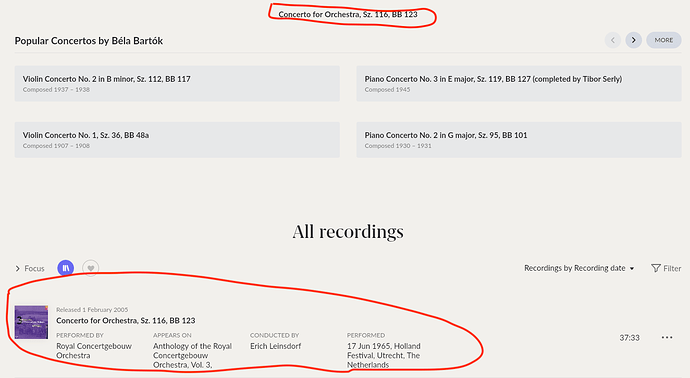 Do you have “Only complete recordings” set? If so, try turning it off to see what happens.

it works when I turn “Only complete recordings” off.

But what struck me: The recordings that disappear have no entry in the Allmusic database or are only represented by a placeholder. (that was just a quick, not a complete review)

I had observed a similar behaviour, that seems to have been caused by the same issue.

How does "complete performances" work? Support

Core Machine (Operating system/System info/Roon build number) ROCK Version 1.0 (build 227) stable Roon Server Version 1.8 (build 783) stable Local Files only Description Of Issue It is the easter week and I’d wanted to listen Bach’s St. Matthew Passion. Checking my recordings I found that I see only one single recording on the main composition page, while I have 47 recordings (including excerpts). [image] [image] Checking this recording I see that I should have in fact 47 recordings [i…

I was wondering what effect this flag would have with a local files only library. There is no documentation to my knowledge that describes how a “complete” recording would be identified within this context.

Ya, i beliebe it is related to that. Also Recordings only in the library and not on streaming are more vulnerable to not being picked up by that button.

@Klaus_Kammerer1 No idea how Roon derives that „complete“ criteria. I‘d guess its via time stamp.

All I know for sure, its not working as designed. @support are aware and hopefully already investigating.

For what it’s worth as a data point, I don’t stream, so have local files only in my library, and have the same problem as Helmut with the flag hiding complete compositions it should not.

I also have no idea how Roon determines a „complete“ recording in such cases. For my Mahler Symphonies, I have no incomplete recordings at all and Roon would only show 2 out of 50+ recordings for a given composition if this indicator is set.

Mike goes into the Complete Recordings option a bit here: