Edit: We need to figure out if there is something that we can do here. This hasn’t been an issue with TIDAL because, although you can buy downloads from TIDAL, I’m not sure that many people do.

as I said (… since, a couple years ago, during my very first days of Roon trial, I believe)… just give users an option to automagically “Add/Do Not” to their libraries content from streaming services and everyone will have Roon the way he likes it

as there was no way I could blindlessly trust the “Duplicates” filter… sorry!

Don’t be sorry. I was about to add a post saying just that. I always double check before pressing the Delete on a large number.

Well, I deleted them all yesterday. Hasn’t re-occurred yet. Maybe it was a case of Qobuz trying too hard to match albums. But I don’t see how that would get me stuff like Christmas music and children’s music.

might be… one more “oddity” I just found: when you add to your library an album from Qobuz (eg, in my case, the Hi-Res version of a CD quality album I already physically have in my library)… it also gets added to your Qobuz Favourites

“Probably” it’s, once more, just me but… can’t get why and it doesn’t make any sense to me

(but you can, then, remove it from your Qobuz favourites and it will stay nonetheless in your library)

I would like to see my Qobuz purchases not automatically added to my library. Qobuz favorite albums added automatically to Roon library is fine. The Qobuz also treats Purchases and Favorite Streaming Albums separately. That is the way I would like it also in Roon.

This has already been noted by the Roon team, and a change is likely. See:

Yeah, I see your issue here, and it makes sense. If a purchase is already in your library, having the streaming version also sync into your library is redundant. We’re going to look into making a change here – thanks for the feedback @Peregrino @pl_svn .

I would like to see my Qobuz purchases not automatically added to my library. Qobuz favorite albums added automatically to Roon library is fine.

exactly the other way around for me, thanks
so… a simple user selectable option “Add/Do Not” is what would make everyone happy

Paolo, I take it that what you want is for your Qobuz purchases to be automatically added into your library, instead of your having to add them manually, as you do now?

The issue that Paul is highlighting is that now anything that is noted in the Qobuz Purchased Albums list is added a second time into the library (as a streaming copy) by the sync process. That’s needless duplication, as we see it.

The reason is that the download is a relatively slow process, so Roon sees the album gradually appear, and tries to make sense of what it’s seeing. The identification process often breaks as a result.

Best practice is to download to a staging area outside of your library, and once complete manually copy (yes, sorry, still manually) the albums into your library. That, or stop your Core whilst downloading directly into your library is taking place.

Paolo, I take it that what you want is for your Qobuz purchases to be automatically added into your library, instead of your having to add them manually, as you do now?

Geoff… no: my vote is for letting users pick what to automagically add to their libraries (Purchases, Favourites, both or… nothing). and my pick would be… nothing

Ah, OK, I see. Not what I would want. I just add stuff in and listen to it. If I like it enough, I’ll purchase the album.

The link between the online streaming services and what is in your Roon library is Favorites.

Tidal integration has always worked this way and so does Qobuz.

already got that but… “issue” is I’ve always been using Qobuz Favourites as a temporary repository for albums I want to listen to before adding to my library (purchasing, in the past. or not going to purchase and removing from favourites)
what Roon only lets me do at present is… add

If you remove the album from your Roon library it should get removed from your Qobuz favorites unless there is a bug.

When you want to remove an album from your Roon library you select the album (on an IPad leave your finger for some time on the album, so it will highlight). Then in the edit part you can select delete album. When you do this to a Qobuz album in your library you will be asked if this album should be removed from Qobuz favorites. So you can do it from Roon. No need to go the the Qobuz app.

If you remove the album from your Roon library it should get removed from your Qobuz favorites unless there is a bug.

only works for albums I have added to my library, doesn’t for Favourites automatically added by Roon

We need to ping @support then.

I mean there’s no “Remove from Library” option for Favourite albums added by Roon
(also see a previous post of mine, please)

Delete Album will remove a streaming version from your library and as a Favourite in Qobuz or Tidal. This may take some time to sync. 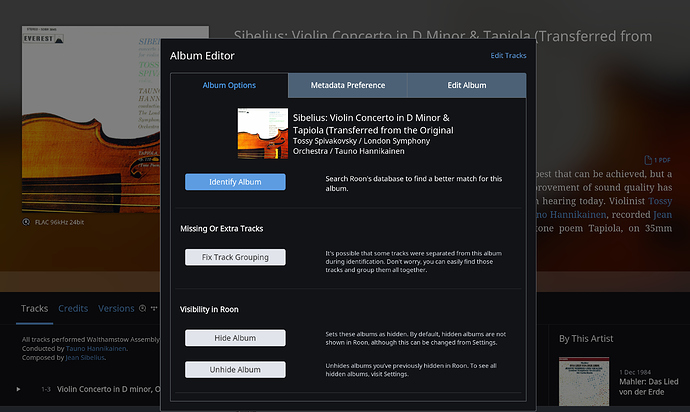