it might make a difference, Thomas
(I’m not sure about what happens if the IP the device asks for was already assigned, by the Airport, to another one which booted/connected before)

and… yes: just the “machines” involved in music playing is enough
don’t forget to restart the Airport, first, then the devices you reserved IPs for, afterwards. and obviously set these to “use DHCP”

Ok @pl_svn, the Airport is now set up with hardcoded ip for the Drobo (both the Music and the Movie Drobo) and the MacMini and I’ve rebooted everything in the right order.

Anyway, Roon is now recalculating again. I will reboot a couple of times and se if it works any better.

So @pl_svn, now I’ve set the Drobo to automatic ip via dhcp and rebooted everything a couple of more times.
The problem with Roon recalculating is still there even if things seems a bit more stable.
@support, please see the changes I’ve made with static ip in the Airport router during the weekend, i.e. static ip set for the MacMini and the Drobo, but that didn’t do the trick either. Any ideas?

Hi @Thomas_Rosander ---- Thank you for you sharing your feedback with us and my apologies for the wait here. I would like to propose another test to see if we can trigger a change here.

Can you try enabling SMB3 on your Drobo NAS. Then, open the “terminal” on your Mac and enter this following command line:

It should show all shared folders and the SMB version which is used to communicate with them. Please take a screenshot and share in your update.

I can 't seem to find anywhere in the Drobo Dashboard setting where I could change protocol to SMB3. Any idea on how to do it?

@support it seems like the Drobo actually is connected via SMB3 after all. 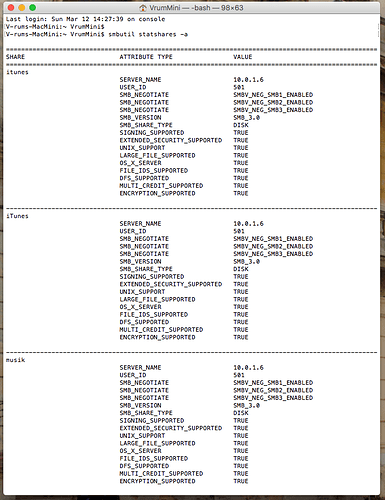 @support Things are a bit more stable now, but some odd problems remain, like the two albums on the left of the picture below.
The album on the left reappears every second time i reboot Roon as a new album, which it isn’t. The album second from the left appears almost every time I reboot Roon. It is a fraction of the actual album which is already recognised by Roon. This turns up as a new album with two or a bit more songs no matter how many times I either merge albums or just hide them.

The Patti Smith album and the new Alison Krauss was added at the same time. As you can see only the Patti Smith is recognised as a new album while the Krauss isn’t.

The Lissie albums are a newer add than the Springsteen albums, but they are not noted as new either.

I’ve done about ten reboots now with the new network setting and things are really more stable but still has some issues as you can see. Recalculating last reboot yesterday evening took all night and now its adding “new” albums again. 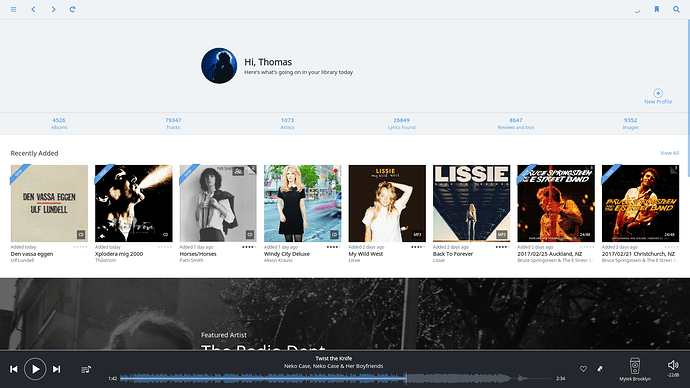 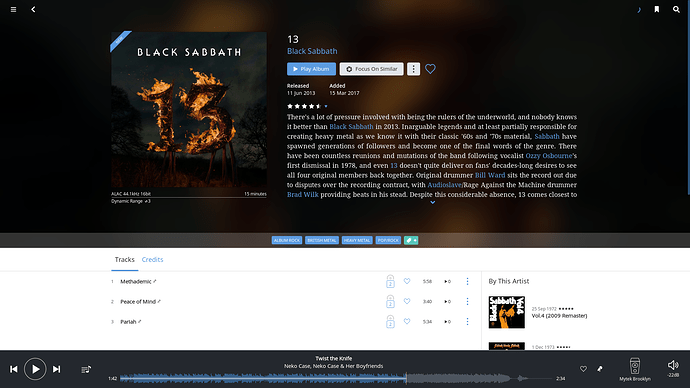 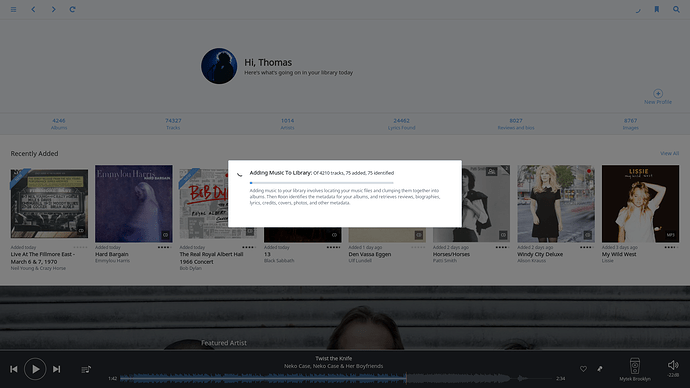 though, Thomas… you can only tell if/how many albums Roon dropped after the whole rescanning is done
did you actually let it complete when this happens or you just reboot the Mac?

@pl_svn the mac is not rebooted. I only rebooted/restarted Roon. That’s why it is so strange that Roon drops hundreds of albums and the recalculates. Note that the album drop does not happen every time you restart Roon.

And now that Thåström album that’s been hidden or merged ten times turned up again! And not with all tracks, but different tracks every time. 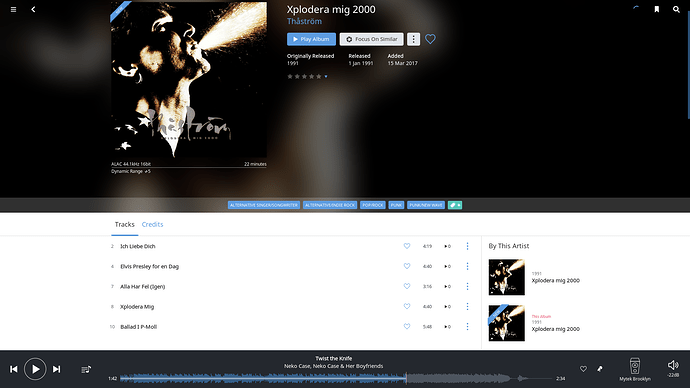 Album count after this restart is correlating good enough to the last though. Which is also a bit strange since new albums are added (that isn’t new…).

Hi @Thomas_Rosander ----- Thank you for your patience and my apologies for the wait here. When you see “New” on an album cover this is only covering albums that haven’t been played yet, so albums in “recently added” can still be new, without the badge.

Moving forward, may I kindly ask you to please try the following:

Everything rebooted in the order: Router - Drobo - MacMini. Roon restarted after that. Spinning complete and analysis complete.

Result: The number of albums seems consistent with the latest scan, but still I really can’t understand why Roon keep saying albums are new that it have never called new before. This time all of a sudden a bunch of Bob Marley albums turned up as “new”.

What’s worse is that the Thåström album I’ve now hidden the “duplicate” of (Files on drive show no duplicate of that album, so Roon seems to make that album up at almost every rescan.) at least ten times has showed up again. This time with duplicate tracks, but incomplete as every time. The second album, Taube, also turns up in various states at almost every reboot.

I can live with an album or two that behaves strangely, but that’s not the problem ad I worry about how many of my other albums are regarded as incomplete or just mixed up by Roon.

Another thing that has happened there or four times lately is that the connection to the audio playback is lost.
I run a Mytek Brooklyn and a Hifiberry, which can suddenly both be lost, and then turn up again when I restart Roon.
Audio continues to play fine through other software, so the Mytek is not lost by the computer itself (connected via usb).

Please see pictures below of the current status. 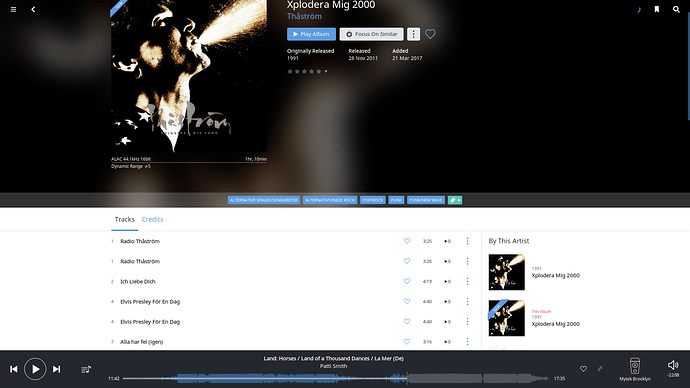 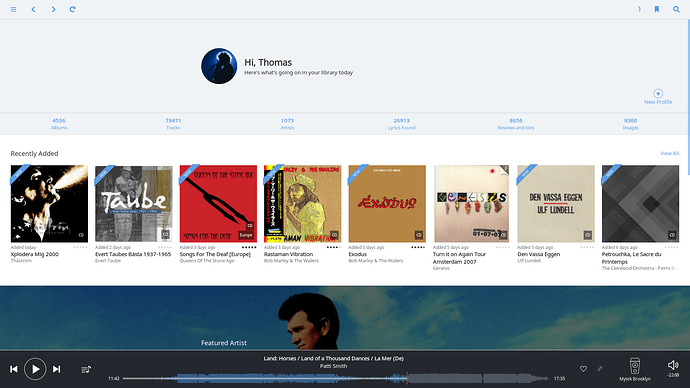 Here’s another picture to illustrate part of the problem since I never fully understood what you meant about the “new” label. If I sort albums after “Sorted by Date Added”, albums still turn up that was added ages ago. The last album I actually added of these are Genesis Turn it on again tour (Don’t ask why since it sucks!) then comes a few “old” additions down to Patti Smith Horses/Horses, which is new. After that everything is correct down to 2017/02/13 Brooklyn Phil Lesh, then there’s a Bob Marley album that also was added ages ago during the first Roon scan of my system, as the others above. Then comes a mix of new and old additions.

Please try to explain this to me.

I also noted a discrepancy between this views album count, 4482, and the Overview that say 4536. How’s this? 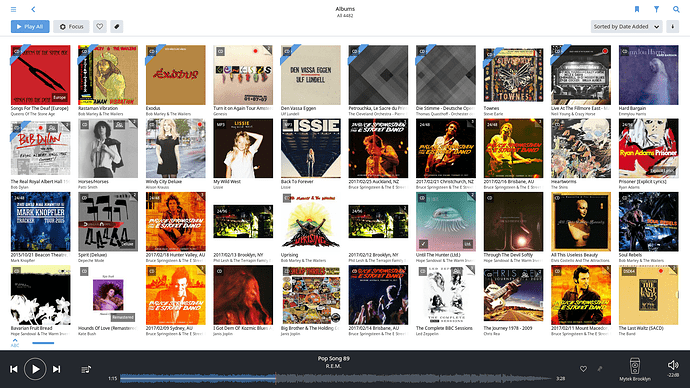 any chance you have, in Library/Import Settings, “Track Import Date” set to “Use File Modification Date” and you edited some tags?

Nope. But that would have been a plausible explanation. 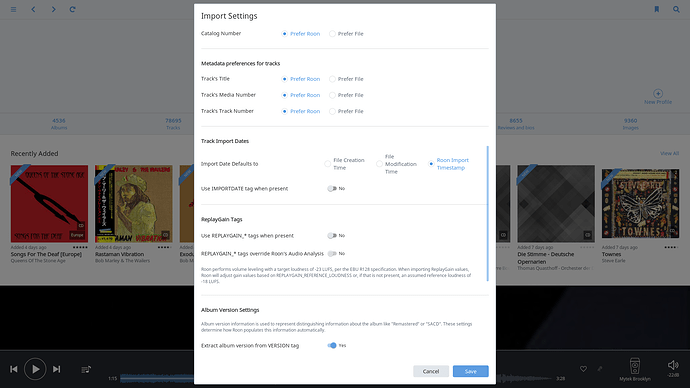 Another example of a “new” not new album turned up yesterday. As you can see in the second picture the album already exist and is complete. Roon still finds a “new” album with only track 5.
As you can see in the third picture that dreaded old Thåström album turned up again today, twice, as a “new” album while the original not new album sits where it always has been sitting.

Any ideas? I mean, the whole point of the Overview must be to see you recently added albums, right?
As I see it there must be something that trigger this constant recalculation in the album or track metadata, but what, and why? 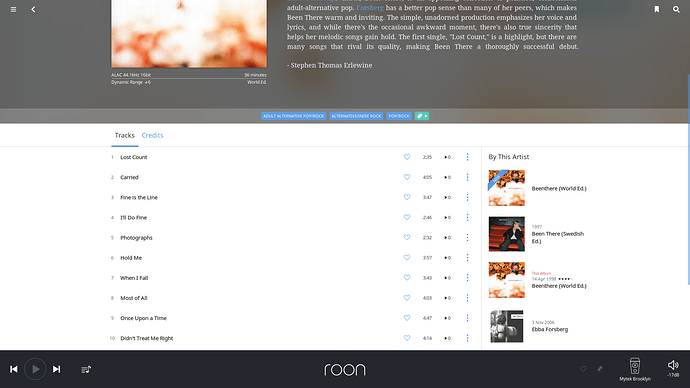 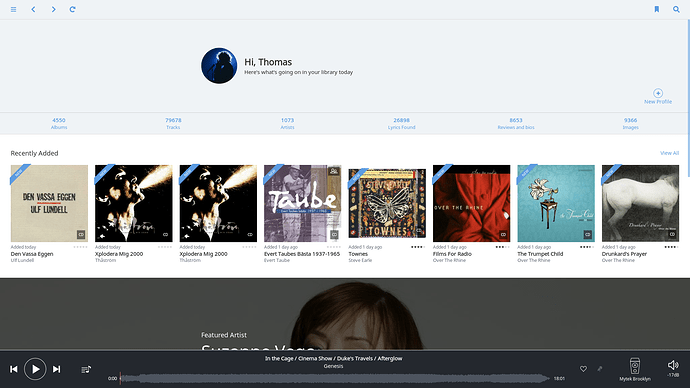 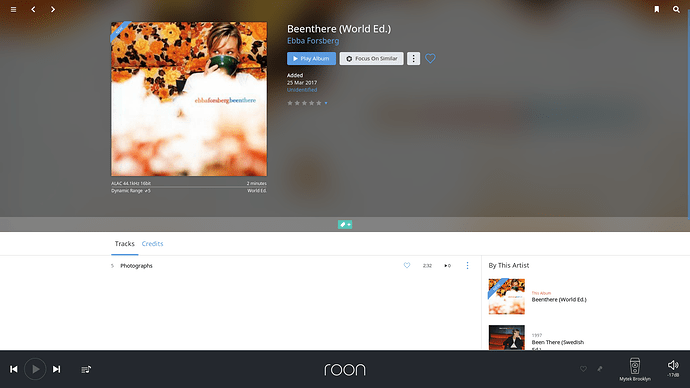 Thomas… let’s drop once more a flag to @support