Where can I read change log for a particular version?
For example for v.1.0 build 167, 164, 156, etc.
Automatic updates don’t work for NanoPi and I don’t know if I should try to manually update the version of Roon Bridge 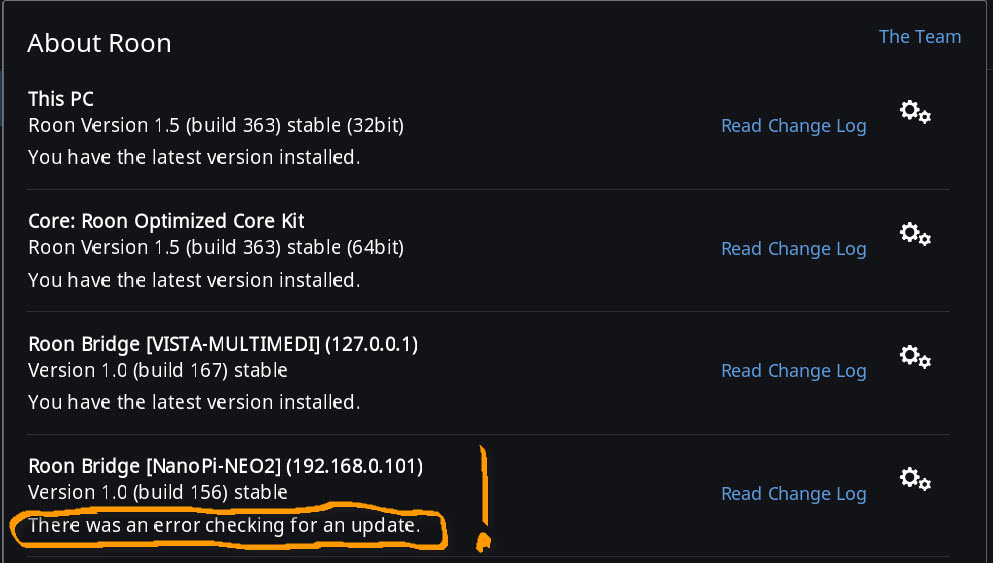 I can’t find the change log for Roon Bridge on your link, for example, for version 1.0 build 167. If you help me find it, I’ll be glad.

Roon OS (Build 156) Release Notes Bug Fixes and Improvements in Roon OS Build 156: Fix for the need for cifs:// on MacOS. Now you can use smb:// freely.

Roon 1.5 (Build 334) Release Notes
Roon Build 334 replaces Build 333 for OSX, Windows, Windows (64 Bit), and Linux.
Android, and iOS apps remain at Build 333, both available from the App Store or Play Store respectively. Please make sure to update all devices.
Build 164 of Roon Bridge is also live for all platforms.
All platforms and apps should update automatically.

Hi all, A new maintenance release of Roon is rolling out. This release includes a handful of bug fixes related to the 1.5 release, notably a fix for a bug causing loss of MQA lock issue in between tracks, as well as fix for a crash related to external source controls. The full list of bug fixes is below. Thanks all! The Team at Roon Labs Roon 1.5 (Build 323) Release Notes Roon Build 323 is now rolling out for OSX, Windows, Windows (64 Bit), and Linux. Updated versions of Roon for Android an…

Hi everyone! We’ve been hard at work on our first release of the summer, and we’re proud to finally deliver one our most popular feature requests – Chromecast support in Roon! Build 334 is rolling out now! Chromecast Support [image] Starting with this release, Roon will stream to any Chromecast device, including devices with displays (such as Chromecast Gen 1, Gen 2, and Ultra), as well as audio-only devices, such as Google Home, Google Home Mini, Google Home Max, and of course Chromecast Au…

Roon Bridge on DietPI: impossible to update from build 164 to 167 [Resolved by Dan_Knight (DietPi Creator)] DietPi

@support following today’s rollout of Roon 1.5 (Build 360), the update of Roon Bridge didn’t succeed. After seeing the downloading progress bar and “Installing 1.0 (build 167) stable” message i get the following error message “There was an error checking for an update”. [47] Never had this before. Issue remains after rebooting Core and Endpoints (both under the latest DietPi).

@Martin_Webster please write yourself here any changes in any version of Roon Bridge .

I think you’ll find that Roon Bridge is only updated when there are changes to the RAAT SDK, which is used to build parts of Roon Remote, Desktop and Roon Bridge, or the auto-update mechanism.

If you view the release notes you will see that Roon Bridge isn’t always updated. When it is, there is an update to all platforms.

Regarding auto-update not working, please see the other link I posted since this describes a similar issue including a fix.

Roon Bridge builds are released with Roon releases, the release notes do not separate out what changed in Bridge specifically. @Martin_Webster already linked to the relevant Roon release notes.

I believe he’s asking specifically what changed (under the hood) with Roon Bridge going from 156 to 167 (for example).

It’s not life and death for me to know of course but I have always been semi curious why the numbers go up but there’s no mention of any change. Must be very very minor changes.

I’d expect the release notes to list any major, user-visible changes. Since they do not, I’d let sleeping dogs (releases) lie. The change made no difference on my Allo USBridge with DietPi.

Agreed. He’s allowed to ask Roon the question though

Let’s wait for Roon to reply.

No I think they respond if you tag them. I tagged Support for you above. Just give it some time (different timezones etc).

Hi Sean! OK. Just in my case (direct connection of the NUC Rock to the endpoint via ethernet) is not very easy to manually update the Roon Bridge every time.

Where can I read change log for a particular version?

Roon Bridge runs basically the same code as any other RAAT zone, and when there are notable changes to RAAT they’re detailed in release notes.

Our build environment and dependencies can change from time to time, so we periodically release Bridge updates as a matter of course, even when there are no substantive changes to RAAT. Sometimes a Bridge update may include minor stability or performance improvements, but its generally not because we made changes to Roon Bridge directly.

Point being – its good to stay current, but nothing of note has changed in Roon Bridge recently.

Just in my case (direct connection of the NUC Rock to the endpoint via ethernet) is not very easy to manually update the Roon Bridge every time.

Why would you do this? As stated elsewhere, there is no route so auto-update won’t work for you.

Why would you do this?