I’m starting to feel worried that the backup function might no longer be working AT ALL - despite the hidden folders.

Just to put everyone at ease here – we have an understanding of what went wrong here, and we are working on a fix and preparing for some additional QA on the backups feature before our next release.

I should have more information soon, and I will follow up here with updates as things progress, but I just want to be clear for everyone that your existing backups are safe, and we are working on this.

@support
Hi everyone,
yesterday I updated to High Sierra 10.13.1 to find out if this might solve the backup issue I reported a while ago. I just wanted to let you know it didn’t, although I’m not quite sure if this information is useful for you at all — just in case…

Didn’t find this thread before, I do have the same problem, running ROCK / Windows.

Backup files invisible in windows explorer. Are they there at all? Support

@support I run ROCK on a NUC, without any problems. Until yesterday, I used a USB Stick attached to the NUC to back up my roon database to. Yesterday, I switched to a spare USB HDD. The drive is formatted to ExFAT. Now, roon backs up just fine (at least that’s what it says), but I can’t see any files in windows explorer. There are no files shown, where in the past were a whole bunch of subdirectories and files. When I do a right-click on \ROCK\Data\Storage\ (my HDD)\RoonBackups, I get the info…

Hi,
I’m running RoonServer on a fedora minimal install till previous version i didn’t get problem with backups but since build 269, I can’t do backups anymore I get this:

Backups are on the same NAS (Seagate Personal Cloud) than my Music files but in a different folder.
“Backup Roon” and “Ronnbackups” folders can be reached without problem and are normally available from any other computer on my network and I can browse them from Roon Remote. It appears that they aren’t available only for a backup session.
Note that I don’t have any problem to play audio files stored on this same NAS.

I think there’s an issue with this. I checked my Mac Mini (running 10.9.5) and forced a backup yesterday. The folder is blank - presumably the backup files are hidden.

It would be good to fix this asap.

@support
I am having the same problem with my sonic transporter…cannot delete backups.

Andrew Gillis set up backups during a remote teamview.

Here is a screenshot. 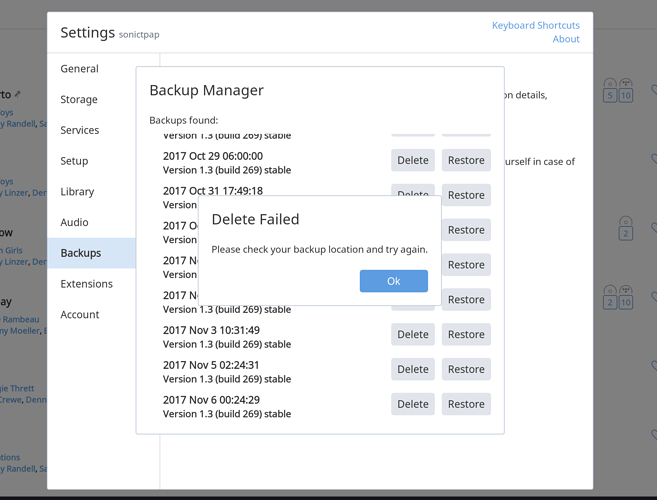 @seaharp1 ---- Based on the traces seen in your logs, you are indeed feeling the affects of the issue we identified in the thread mentioned in Jim’s post. As Mike has stated, we have an understanding of what went wrong here, and we are working on a fix and preparing for some additional QA on the backups feature before our next release.

In light of this I am going to be moving your posts from this thread over to that one, so we can keep anyone having this problem in a single location to ensure everyone is up to date on our progress.

@support I generally manually create my backups as and when I add or edit albums. Coincidently or not, after re-installing ROCK (unrelated reason), i can no longer clean up my old backups. I can still create them however.
I get an error message saying “Delete Failed - please check your backup location and try again.” My backup location is evidently ok because roon lists the backups I have there.

Not that I know what I’m doing, but here’s a bit of log that might mean something to someone who does…

Sounds like something’s out of sync. I have successfully restored my latest backup but still cannot delete a backup.
Before I go resetting my database what should I do?

PS I wanted to have support in my category but my android chrome tablet wouldn’t let me.(the box flashes open and flashes closed before I can select)

Hey @BrianW — Not sure what happened but it looks like we only received a partial upload to our servers.

I have since flipped diagnostics “off and then on again” to reinitiate the transfer. When you’re core machine is online next the report should make it’s way over to us. I will keep an eye on our servers and will confirm when the diagnostics report becomes available.

@Eric, it may have been my fault. I turned Roon on specially this morning for about 30mins. Then turned off and did other things. I usually have it on only in the evening. Anyway, it’s on again now and it’ll be on for a couple of hours,

Hey @BrianW ---- Thanks for touching base with me! Confirming that the diagnostics report was received and evaluated by a one of our techs.

As I mentioned to the other user who posted in this thread, based on the traces seen in your logs, you are indeed feeling the affects of the issue we identified in the thread mentioned in Jim’s post. We have an understanding of what went wrong here, and we are working on a fix and preparing for some additional QA on the backups feature before our next release.

I am going to be moving your posts from this thread over to that one, so we can keep anyone having this problem in a single location to ensure everyone is up to date on our progress.

@Eric, no problem, I have lots of room on the NAS. I’ll just keep adding backups…

I am running Roon Core on a ROCK Nuc. My music is stored on a QNAP NAS, which has a lot of extra space, so I also set up Roon to use it as my local backup (I use Dropbox for offsite backup). I’ve been doing so successfully for a while. Then a week or so ago I see a warning in Roon, and a note in red type under Backups, that the backup failed because the directory was unavailable. Hunh? The directory on the network share has backup files in it. I can create a new directory, and copy files from my Mac into the new share, or the old share. I thought I’d figure it out, but after a week or so, I’m flummoxed. What’s up?

This appears to be a known issue with Build 269. The Devs have commented here:

@support Hi everyone! I can’t backup my roon database anymore. My last successful backup was on September 29 (2017). During the (unsuccessful) backup attempts everything seems to be working fine and after them I do get the message “last successful backup at… (plus the correct date and time)”, but nothing (new) shows up in the backup folder. If I try a new folder (either on my internal SSD or on one of my external SSDs), the folder always remains empty. However, if I right-click on the folder t…

Got it. Thanks. Would have been nice if, when I searched on Directory Not Available some of this thread would have turned up, but, whatever.

Hi everyone! I’ve just updated to Build 274, but I still can’t backup my database. Nothing has changed. What should I do?
Any help or advice will be greatly appreciated.

@support
Sorry, there’s something that HAS changed. After the backup I still get an “empty” (i.e. hidden) folder in the Finder, but now I can delete it (I couldn’t do that before updating to Build 274). Does this mean the backup worked - despite the hidden folder? Roon can find the backup when I use the “browse for backup” option…