Roon does not read ACC files

Doing the same, I see: 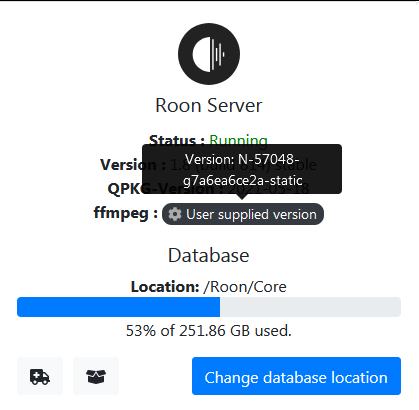 Version 3.3.6 is the system default one that doesn’t support AAC.

Note: ffmpeg version 3.3.6 isn’t available from the site you linked, not even when following the link to old releases.

Please try installing a user supplied version of ffmpeg again. You can use the instructions (watch the video) found in the post below from the thread that BrianW already linked to:

Hi everybody, I have been working hard on a workaround for the ffmpeg issue on QNAP NAS with QTS 4.5.1 and will forward the update to QNAP. It has an option to manually add ffmpeg to a folder in the specified database shared folder. You’re more thanwelcome to give it a test. Feedback is really appreciated (preferably as a PM). Link removed. → The Update is now available in the QNAP App Center. You need to download a static build of ffmpeg manually (you can find good build for example on J…

I’m not a computer geek, only someone expecting to have a fully working Roon without having to learn computer sciences to use it. Thus, you cannot expect that I know that ffmpeg version 3.3.6 is not the John Van Sickle AMD version.

However, as stated in my Aug 1 (3/8) post, I did import the AMD version from John Van Sickle site, click twice on it, and made the result available in the a folder on my desktop (See my post 6/8). I open the Roon Server App in the QNAP. Clicking on the ffmpeg small window, I was asked to provide the ffmpeg App in a folder created on one of the QNAP drives - ffmpeg_for_RoonServer. Did this, and finally click on “Use my ffmpeg version…”. A message appeared, saying the installation was successful and Roon was restarted. However, I still get version 3.3.6 of ffmpeg.

I don’t know what I’m doing wrong. I need help.

I was asked to provide the ffmpeg App

Note: This is just a single file called ffmpeg out of the many you extracted from the download.

A message appeared, saying the installation was successful and Roon was restarted. However, I still get version 3.3.6 of ffmpeg.

Maybe a reboot of the NAS as a such may resolve things for you. I also ping @crieke as he may have other troubleshooting steps in mind.

How do you copy the file over to the NAS? From a Windows machine, a MacOS one, other method?

Hi @Francois_Beland,
I am sorry for the trouble you have with the ffmpeg installation. It is actually already on my to-do list, to simplify this process.

Can you try to fully uninstall Roon Server in the QNAP App Center and reinstall it again? (Don’t worry, your database will not get touched or deleted when uninstalling the app.)
Afterwards set your database location again and check, if ffmpeg can be added now.

I found with my local CBC station in Victoria BC that I had to find an http site to listen to the station on Roon live radio feature, as the cbc player didn’t work

Having to delete the Roon Server from Qnap gets me extremely nervous, as deleting and installing any Apps on it. Initially, a tech guy installed Roon for me. I need some guidelines to do delete and install. Can you provide some?

I’ve successfully deleted and reinstalled RoonServer on the Qnap. Also, the ffmpeg version is now the “N-58069-gc253b180cb-static”.

Clikcking on the Roon interface on my iPAD, I’m asked to choose a server. The QNAP on which Roon Core is installed is identified. I click on the Connect button. An identification window opens, and I’m asked to identify myself. I do. Then, I’m said that I’m trying to install a new Roon Core. In a word, there is no way I can play Roon anymore!!!

Then, I’m said that I’m trying to install a new Roon Core. In a word, there is no way I can play Roon anymore!!!

No need to worry. In the screen, that tells you, “you have set up a new core”, there should be a deauthorize button. Even though it is the same device. After that, you should see your regular Roon screen.

I am not fully sure if I understood you correctly: If you have selected a different database location in the qnap roon server window, you will start with a new empty database (because your previous database is stored in a different folder and won‘t be used. It would also explain the screen, why you have been prompted to authorize your server again.

I used the backup file from yesterday to get all my music back. All is working fine, including ACC files.

Great Francois!
And I have to apologize for the initial bug, which prevented adding ffmpeg in the first place.

I’m new at Roon. It’s a bad joke that Roon wants to collect money every month for an audio server app and then a customer should start tinkering with some codecs like in the 90´s.

This has nothing to do with Roon and everything to do with QNAP removing support for aac in their version ffmpeg which is needed to playback and decode aac on most Linux based operating systems. Roon uses FFMpeg s for support of codecs like most software does on Linux as they are not built in like Windows and Mac. Licensing for AAC is as mess and ffmpeg cannot be bundled in some regions such as the US in a commercial product. So this is not bundled with Roon so you need to install it manually. This decision by QNAP to remove AAC support affects many other apps not just Room.

Hmm, ok I unterstand. Qnap offers the Cyan Media Player Basic for 0€ with support for AAC-codec. 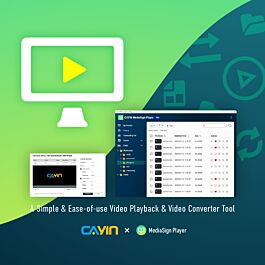 CAYIN MediaSign Player allows your NAS to support video transcoding and opening image and video formats, including HEIF and HEVC.

Maybe Roon can use this codec?

So what, I followed instructions to add FFMPEG in Vs. 4.4 from John Van Sickle into Roon-Server and it works. But the question is how long?!

I would say no it’s not.

Success report and guide on setting up missing AAC Play functionality in Roon on Qnap by adding a link pointing to Cayin ffmpeg.

Earlier I used the Daniel Murphy workaround, which stopped working for me after upgrading the NAS firmware to 5.x.x.1891.

Thanks. Any clues on how to do this on a Mac? I have no idea where this FFMPEG file is and how to get it transferred. I can log in via ssh. I have been through the various tutorials on how to do this but the screens all look different. My client is pretty fed up, having had no access to his AAC files for the past 8 weeks, following the system update. 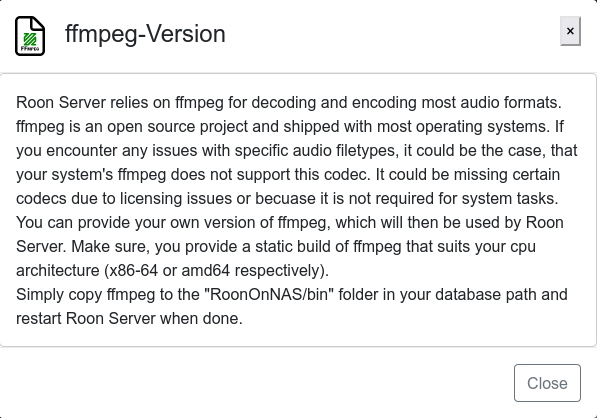 I have no idea where this FFMPEG file is

It is here: https://johnvansickle.com/ffmpeg/builds/ffmpeg-git-amd64-static.tar.xz
It is inside that package and called ffmpeg.

Any clues on how to do this on a Mac?

None at all sorry. What method does your client normally use to access his NAS?

If you want a graphical interface, I think CyberDuck is an alright SCP/SFTP client for Mac. But you can move stuff from the command line using scp.

[Edit]
So maybe it works after all. The file I was expecting to see was not aac after all

Since you can ssh in, you can do almost everything on the command line…

The $ and # are prompts indicating which lines are commands.

Select to drop to the command line (q, y)

Find the location of relevant Roon directories. Once you find something that looks about right, the search can be stopped with ctrl+c:

So on my NAS it was on /share/CACHEDEV2_DATA/RoonDatabase/RoonOnNAS

On your Mac go to the directory you extracted the static ffmpeg in and copy it to the NAS:
$ scp ffmpeg admin@<nas-ip>:/share/CACHEDEV2_DATA/RoonDatabase/RoonOnNAS/bin/

Where the path after : is the one that’s valid on your NAS.

Thank you for this. I used the web file manager and copied the FFMPEG into there. This did not work. My client has given up with Roon as this was taking too long and he has replaced his Merridean Sooloos with Sonos and cancelled his subscription.