What is the exact port forwarding error message you see in the Roon Settings → ARC tab?

Thank you for bringing this to the attention of the forum. A few questions might help illuminate why Roon’s not catching the duplicates:

I imported all the tracks using db Poweramp.
I don’t know what custom tags are, so I dont believe these are associated.
I’ll try to upload duplicate tracks not being spotted by Roon.
The song Along Comes Mary is on the albums Psychedelic Years and Heroes and Villains, but is not identified as a duplicate (see screenshots).
Roon used to spot these reliably, but at least on compilations, no longer seems to do so.

When you click the three-dot menu of these tracks, does the menu contain a “Go to composition” entry like so? 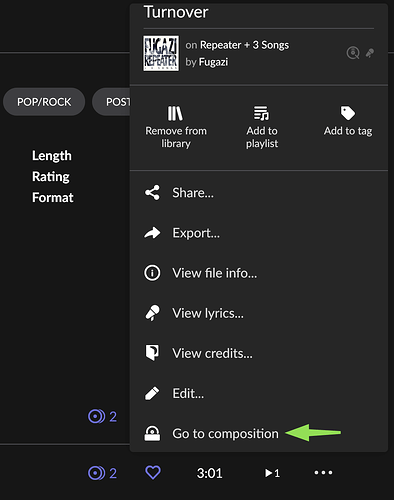 Only one of the Along Comes Mary tracks has a ‘Go to composition’ associated with it.

Some tracks are simply not recognized as compositions by Roon and it’s a bit of a mystery what is necessary to make a track a composition if it isn’t. Adding a composer does not do it, for instance. Most likely, Roon only sees a composition when this metadata comes from the metadata services. Sometimes, I added a local album and tracks were not recognized as compositions, but then that changed after I added a streaming version to the library as well. But it does not always help.

IMHO this is a bug or missing feature - at the very least, I should be able to make any track a composition by adding a composer credit and merging it with other recordings to a composition.

@connor , this is a longstanding issue and it would really be great if it could be looked at, because Roon advertises that it is able to identify recordings of a composition, which was one of my reasons for using it - but it turned out that this is not universally true and in particular for smaller artists is a frequent problem. I need tags to mark such tracks for many of my artists (in the hope to sort it out if it is ever fixed in the future). Also see, for instance, these threads:

When is a Track(s) a Composition? Metadata

I know this has been asked many times before, but @support when/how does roon decide that a track(s) is a composition? It is not uncommon, even when using canonical composition titles and composer names and grouping the composition hierarchy correctly that roon will still refuse to categorise a track(s) as a composition. It doesn’t matter what you do. What causes this? Here is another example. This time it is Debussy’s Premiere Fantasy. I haven’t even played it yet. But it caught my eye on Qobu…

What constitutes a Composition? Metadata

I have a lot of cases where a song is not recognized as a Composition. What does it take to force a track to be a composition? Here’s an example. This is an Identified album of various artists. Note that Otis Spann is both a performer and composer (tracks 3 and 4). Note the submenu does not show Go To Composition: [image] Within Otis Spann I have him as Performer but not as a Composer: [image] And these two tracks do not show up in Composition menu option. Shouldn’t every non-cla…

I am seeing the same problem as well. For example I have one Album that has songs contained in another Compilation and it only sees one of the tracks as having multiple versions. All the other songs don’t show multiple versions. I checked the tags and the Artist and Name tags are exactly the same.

The problem is most likely what I described above. The tracks that are not recognized as another version (or recording) most likely don’t have a “Go to composition” in the track menu because the composition property is somehow missing.

I don’t get why this is so complicated. KISS - Same Artist, Same Track Title = Same Track.

I’m not sure it is that easy because we also want tracks to be identified as a performance of a composition when the artist is not the same. As well if the track title isn’t the same (cover versions don’t necessarily have the same title, or an artist records the same composition several times under different titles).

I agree, though, that when the magic fails there should be at least the KISS option to manually add a track to a composition if the user says so.