When is a Track(s) a Composition?

I know this has been asked many times before, but @support when/how does roon decide that a track(s) is a composition?

It is not uncommon, even when using canonical composition titles and composer names and grouping the composition hierarchy correctly that roon will still refuse to categorise a track(s) as a composition. It doesn’t matter what you do. What causes this? Here is another example. This time it is Debussy’s Premiere Fantasy. I haven’t even played it yet. But it caught my eye on Qobuz so I favorited it. Probably because I like French impressionists but mostly because it is a Copenhagen quartet where I am based at the moment without the possibility to go to live music. Maybe this is a one off. But maybe there is a pattern that could be batch fixed? Seems to happen fairly regularly and 1.8 as far as I can see places a greater emphasis on composers/compositions. 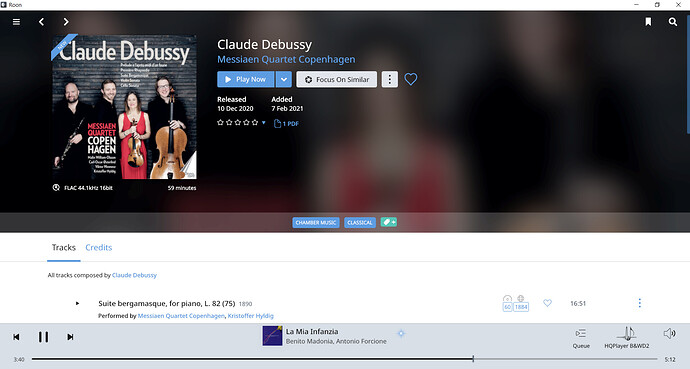 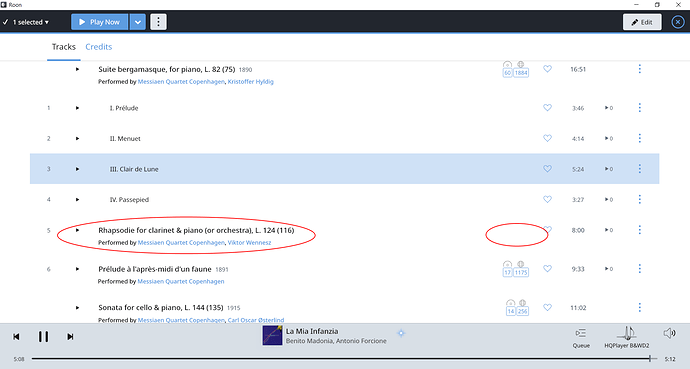 image1918×1027 124 KB
Is there some trick to getting a track to show up as a composition under an artist
Cannot display all of Composers albums
Roon not identifying duplicate tracks
bbrip February 7, 2021, 10:45am #2

Here another example of the same problem: 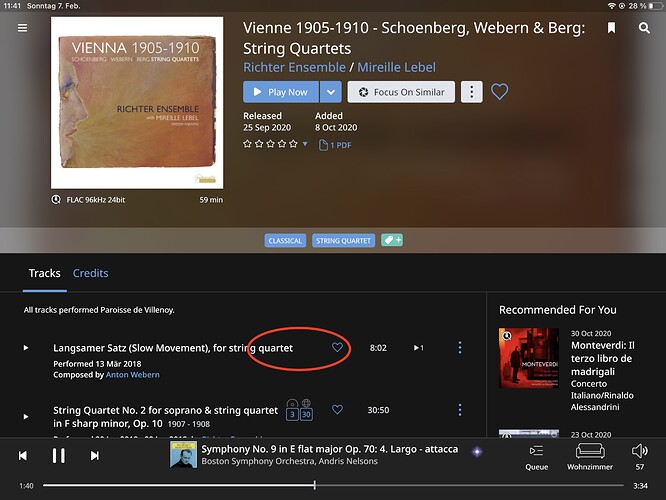 The best explanation i found is in this thread:

I have a lot of cases where a song is not recognized as a Composition. What does it take to force a track to be a composition? Here’s an example. This is an Identified album of various artists. Note that Otis Spann is both a performer and composer (tracks 3 and 4). Note the submenu does not show Go To Composition: [image] Within Otis Spann I have him as Performer but not as a Composer: [image] And these two tracks do not show up in Composition menu option. Shouldn’t every non-cla…

Thanks, I remember that thread from a few years back. It remains unresolved.

I don’t really know what to suggest hence my new post. Maybe if the reason for the behaviour was better understood there could at least be a work-around.

I know it remains unsolved, but it explains quite well in some posts the reasons why it seems to happen. That seemed to be what you asked in the first sentence of the OP

I added an annoying (for me) case a few days ago, where for no discernible reason I can merge one track to another composition but not another track from the same CD although they seem to have all the same properties

I was a contributor on that thread. I seem to remember that from roon’s perspective two (maybe more) conditions need to be satisfied before they considered it a composition. Several contradictory cases were put forward, maybe even one’s similar to yours, so clearly the explanation wasn’t complete and there must be other (unknown) conditions. That thread never went anywhere. It’s a while ago. I don’t remember the details. I’ll take a closer look at that thread.

From my perspective, the main difference is that I now have a streaming Qobuz account I didn’t have then. The issue is even worse in that scenario if anything.

Umm, the circled item “Rhapsodie for clarinet…” IS being treated on your screen as a one-PART composition (or WORK). To officially recognize/identify the composition, import another album with that composition into your library. If successful, your little disc icons will appear.

John, not sure I understand why you would think I haven’t done all that before posting? I have 13 local releases of that rhapsody, a favorite piece. Just to be clear, that’s the canonical name. It has both composer and work tags.

The view is different now of course with 1.8 as there is only one icon, not two, but it makes no difference. The composition will not appear in the composition view so it cannot be merged with my other releases. There are 5 compositions on that disk and 4 of them using exactly the same formatting logic as for the rhapsody are identified as compositions.

If you have a Qobuz account you can try it yourself. It may be available on Tidal if you don’t. I’d be interested in your results as it may shed some useful light.

Sorry, I didn’t intend to demean your competence. Unfortunately, my experience with the Rhapsodie was the same. Roon does not seem to respond to user-entered titles for recognition purposes. Curiously, the rhapsody is the only work on that album to behave that way.

I also tried unIDing/reIDing the album; reimporting; finding non-qobuz copies to import; all for naught.

The only good news was my exposure to a good group and a great album. Thanks for that.

I was a contributor on that thread. I seem to remember that from roon’s perspective two (maybe more) conditions need to be satisfied before they considered it a composition.

What I took from it was that being a composition is buried deep in the metadata and there is no way to make it a composition if it isn’t. That is, when the track’s menu does not have a “Go to composition”, then you cannot make it appear and, e.g., adding a composer does not do this. Which is very odd, certainly something that has a composer is a composition. Another interesting thing was that there is some possible connection to bugs in the metadata providers that may be causing this - it was posted that this was being looked into, but obviously nothing further happened. So that thread was no solution but helped me understand at least - thanks for this.

In my case it was a CD full of cover versions with generally poor metadata (as is often the case for non-US/UK pop/rock, in particular from smaller labels, but not only). None of the tracks had composer data and I added them manually. However, most tracks were nevertheless compositions and I could merge them into the originals. But some were not, and apart from not having a “go to composition” menu entry there was no discernible difference.

Curiously, the rhapsody is the only work on that album to behave that way.

Yes. This is the most curious thing and maybe is the clue that roon needs to establish once and for all the criteria for composition/non-composition. It may not help roon very much as it may mean something deep is wrong in the data model and realistically will never be fixed. But it could point to a work-around we could use instead.

It may not help roon very much as it may mean something deep is wrong in the data model and realistically will never be fixed. But it could point to a work-around we could use instead.

that’s why you need to have your data model solid before starting automation, not the other way round.

Yes. This persistent bug is very annoying. It is actually much worse with non-Classical music. Pop/Jazz etc. There are so many gaps in vendor metadata with these other genres I don’t believe any comprehensive fix is possible. But I would like to be able to manually categorise tracks as compositions more consistently just to build interesting “covers” playlists with favorite non-Classical styles. I’m surprised this non-Classical use case doesn’t give the issue more traction. I guess not many people use roon that way and roon quickly looses interest when they see that.

Hi I just want to add my experience to this topic which I discussed some days ago here:

OK I think I can answer my own question here. To add an album with several tracks belonging to a composition and to assign this in roon to an existing composition is possible if you know how to do it. Here is my approach. as prerequisite I assume that the composer and the composition with rich metadata are already in the Roon library. If this is not the case you can solve this easily by adding an album from Tidal or qobuz containing this composition. You can even delete this after this proced…

another indication that there is some deeper problem with composition identification is that “prefer files” for composition information does not always work. If Roon thinks that it found a match it will override your work tags.

Misidentification of some Bach works - BWV vs. BC Metadata Issues

I am observing a couple of odd misidentification of Bach works that seem to be based on some Roon magic ;-). Case 1 Cantata BWV 198 (Lass Fürstin, lass noch einen Strahl) Cantata BWV 199 (Mein Herze schwimmt im Blut) For some recordings, like the Bach 2000 box set, the cantata BWV 198 is attributed to recordings of both BWV 198 and BWV 199. What I find interesting, is that both works are attributed to BC A120. I have no access to a proper list for the Bach Compendium Catalogue, but it looks…

Unfortunately it is also another example of Roon support not reacting at all if things are getting more complex. Never ever got a response. Not even one saying that they don’t care or don’t do anything about it. Nothing!

No reason to be able to flag support in the message board at all.

Yes, what you wrote. And exactly, I just want it to accept it as a composition when I add a composer.

I guess not many people use roon that way and roon quickly looses interest when they see that.

Maybe, don’t know. The fact that Roon shows me cover versions of a composition (when it works) was IMO one of the coolest things about Roon and a unique selling point

It’s a good summary of what we are already doing. Many of us have figured that out by trial and error. I don’t know if something like that ever ended up in the KB.

IMO one of the coolest things about Roon

Me too. The issue is that you only see the cases where functionality doesn’t quite work with larger libraries, larger devices or a deeper interest in the content. This is a problem all over roon, not just this issue. My experience is that a lot of the functionality is never really finished. There appears to be strong commercial drivers to cease development and move on to something else when they get to a 80/20 “good enough” pareto that’s enough for most customers. Nothing much we can do about that. Risky strategy though it seems to me.